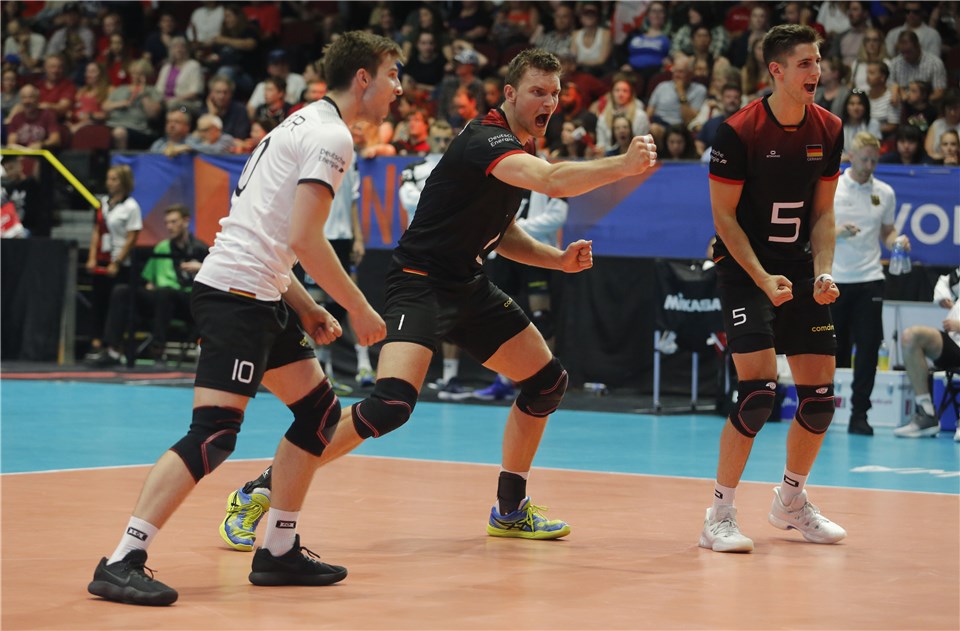 Stephen Marr scored a match-high 18 points, but it was not enough to lead home-standing Canada past streaking Germany on Saturday. Current Photo via FIVB

Stephen Marr scored a match-high 18 points, but it was not enough to lead home-standing Canada past streaking Germany on Saturday.

In its last three Volleyball Nations League matches, Germany has downed No. 3 Poland, No. 2 United States and No. 6 Canada, taking out the Poles and Canadians on their home turf. Canada and the United States will face off at 4:10 p.m. ET on Sunday.

Germany racked up 12 aces in the victory and held off a late comeback effort by the Canadians in the win. The Germans boasted a 52-48 lead in kills and a 12-7 lead in aces, to overcome a 7-6 deficit in blocks and 27 miscues.

Germany had 12 aces Saturday night in their win over Canada! Here are some of the best! #VNL #BePartOfTheGame #volleyball @TeamGER_Volley pic.twitter.com/WbciZKZezT

Germany went 12 deep in its lineup to secure the win. Simon Hirsch led the way with 17 points, including 16 kills and an ace, but it was David Sossenheimer who came through in the clutch with 12 points, all in the final stanza, on eight kills, three aces and a block. Christian Fromm (10), Tobias Krick (9) and Moritz Reichert (9) followed. Fromm notched nine putaways and added an ace, while Krick added six kills and a team-best three blocks. Reichert tallied seven terminations and two aces.

Marr paced Canada with 18 points (17 kills, 1 block), while Bradley Gunter added 12 points (7 kills, 3 aces, 2 blocks) and Nicholas Hoag chipped in 11 (8 kills, 2 aces, 1 block) with each entering the match as substitutes in Set 2. Graham Vigrass tacked on eight points (5 kills, 2 blocks, 1 ace). Formerly retired Gavin Schmitt got the start in sets 1 and 2 and returned in set 4, but only managed three points, all on kills. Tyler Sanders started all four sets, but scored just one point on a block. Ryan Sclater did not play in the match, but the remaining 13 players all saw court time.

The teams were tied at 22-all in Set 1, but Germany came through in the end with a 25-23 win. Fromm, Reichert and Hirsch paced the German attack, while the team was gifted 10 points on errors from the Canadian side.

Germany boasted a 14-9 lead in Set 2, but Canada narrowed the gap to one at 20-19. A service error by Marr gave Germany a set-point try and Moritz Karlitzek delivered with an ace to seal the 25-22 win.

Germany led 16-9 in Set 3, but could not hold on, falling 25-20 to keep the match going. Gunter guided the Canadians from the service line in the victory.

Canada built an early advantage in Set 4, but couldn’t hold off the charging Germans.