Iran and Poland Stay Perfect on Top of Pool D 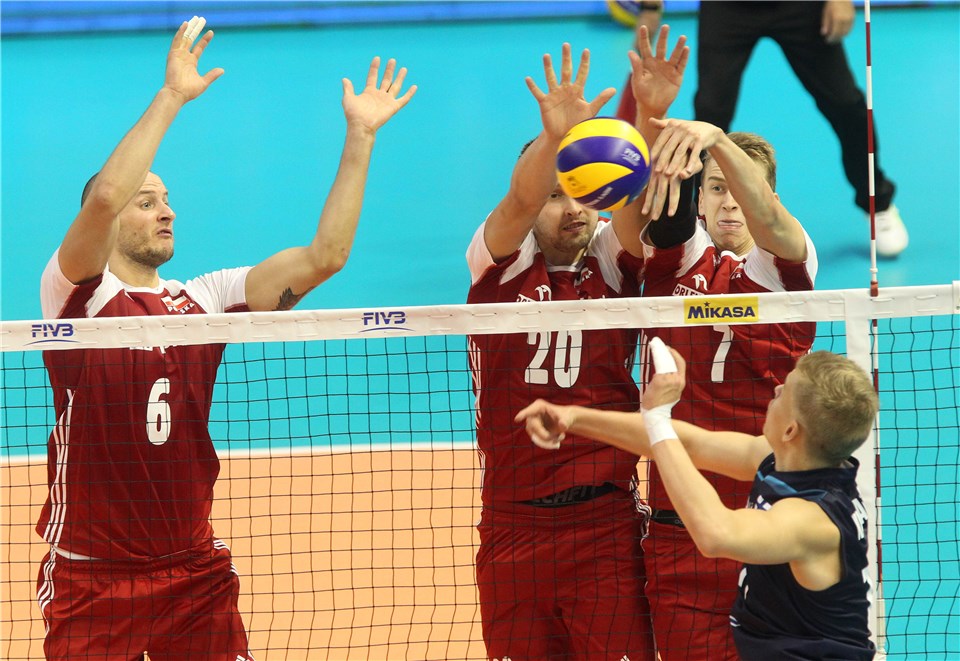 Poland gets a win against Finland to stay atop Pool D at 3-0. Iran remained undefeated with a 3-1 over Cuba on Saturday.  Current Photo via FIVB

Iran moved to the top of the pool with a 3-1 win over Cuba. The top-ranked team from Asia has sealed their advancement into the next round, but will be looking to claim their spot at the top of Pool D on Monday against Poland. Cuba is still looking for their first win of the tournament.

Poland also got a 3-1 won over Finland. They match with Iran will put undefeated teams against each other.

Cuba looked like they were poised to take their first win of the World Championships after a 25-17 win in the first set against Iran on Sunday. Osniel Melgarejo and Miguel Gutierrez both scored 6 points each in the commanding win to open the match. Iran was not deterred by the lackluster start, and bounced back to take the next 3 sets, secure the win, and earn 3 points.

Amir Ghafour led the Iranian charge with 14 points on 11 kills, 2 blocks, and 1 ace. In addition to his ace, Ghafour applied plenty of pressure from the service line. He led the match with 20 service attempts, and Iran scored most of their points from his service rotation. Mohammadjavad Manavinezhad led Iran with 12 kills. He finished with match on 13 points after also contributing a block. Milad Ebadipour was scarce in point production from the outside with 5 points on only 3 kills and 2 blocks with a 16.7% success rate in attack.

Ali Shahiel and Mousavi Seyed both scored 10 points each in the middle for Iran. Shahiel finished with a perfect 10 kills on 10 attempts. Seyed had a match-high 3 blocks to go along with 7 kills. Saeid Marouf, one of the most dynamic setters in the world, set Iran to a 45.1% attack average and scored 6 points on 3 blocks, 2 kills, and 1 ace.

Melgarejo led Cuba with 22 points on 19 kills, 2 aces, and 1 block. The outside hitter finished with a 50% hitting percentage. Gutierres finished with 15 points on 15 kills from the right side. Roamy Alonso contributed 10 points in the middle from 9 kills and 1 ace. Livan Osoria scored 9 points on 7 kills, 1 block and 1 ace from the other middle blocker position.

“We are very satisfied with this 3-1 victory over Cuba,” said Seyed of Iran. “It feels great to beat such a well physically prepared and explosive team. When you play against squad like Cuba, you have to be fully concentrated! In the first set we probably were not focused enough and our opponent surprised us with very powerful serve. Then our coach told us that there was no time for distraction and it was time to start playing our game. Fortunately we managed to do it.”

Poland got an important win and 3 points to set up a match-up for first place in Pool D on Monday against Iran. Poland finished with an 8-1 advantage in service aces and 11-5 in points from blocks. Vital Heynen, coach of Poland, got double-digit kills from both pins and the middle. Bartosz Kurek scored 13 points from the opposite position with 10 kills, 1 block, and 2 aces. Mateusz Bienek put away 10 kills in the middle to go along with 3 blocks, and 1 ace. Artur Szlapuk, a new addition to PGE Skra Belchatow, led Poland once again. The outside hitter scored 19 points on a match-high 17 kills and 2 blocks. Szlapuk also hit 65.4% in the win.

Mical Kubiak contributed 12 points on 7 kills, 2 blocks, and a match-high 3 aces. The captain only had a 33.3% success rate in attack, but he was very productive from the service line and in serve receive. Piotr Nowakowski scored 5 points in the middle on 4 kills and an ace. David Konarski came off the bench in each set and finished with 8 points on 5 kills and 3 blocks. Fabian Drzyzga set Poland to a 57.8% hitting percentage.

Finland only had a pair of players score in the double-digits. Samuli Kaislaslo led Finland with 14 points on 11 kills and 3 blocks. Niko Suihkonen finished the match with 10 points on 9 kills and 1 ace. Elviss Kratins scored 9 points on 7 kills and 2 blocks while only playing in the first 3 sets.