The Netherlands Shock Brazil With 3-1 Win – Pool B Recap 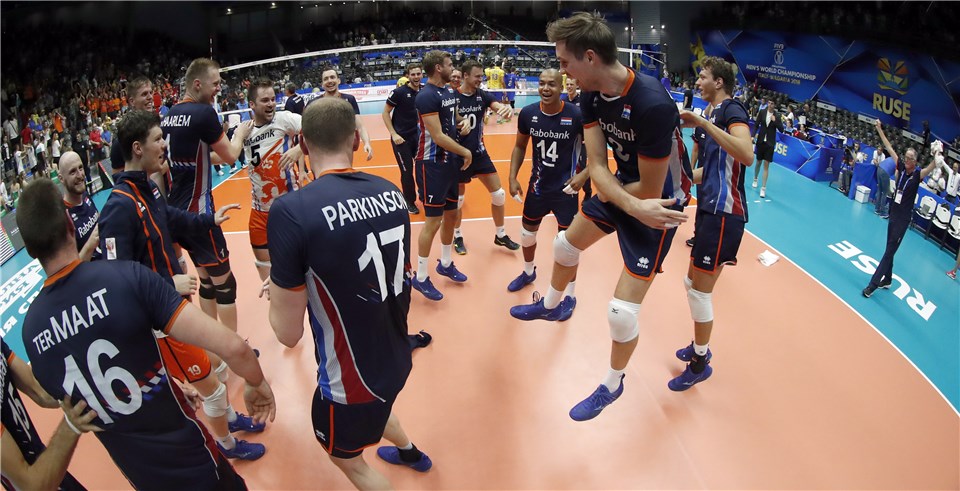 Well, that didn’t take long. Coach Renan Dal Zotto will probably have a bad night of sleep today, pondering if he will still have a job after this year’s WCH if things continue to go south for the Brazilian national team, which now occupies Pool’s B fourth seed behind Canada, France, and The Netherlands. The defeat to the Dutch team, after beating it 3 times during its WCH preparatory phase will hunt the squad. The team, which entered the tournament as the current Olympic champions and WCH runner ups, is missing its two starting outside hitters and knows that things will only get more difficult from now on as the the competitions starts to funnel. Meanwhile, the surprising Canadian squad netted another win, and is now 3-0. Here is the day’s recap:

It didn’t take until the competition’s second round for the truth to come out regarding Brazil’s hopes at this year’s WCH. The injury-riddled team is severely under-powered, and despite netting a win against France earlier in the week, it completely ran out of gas against an overachieving Dutch team today. To make matters worse, this was the first time that the Netherlands beats Brazil at WCH play since 1966. Wouter Ter Maat was one of 4 Dutch players in double figures, leading the way with 16 points, while Douglas Souza and Lucas Saatkamp had 13 points in the losing effort.

Post match reactions are yet to be published by the FIVB.

Really balanced game between Brazil 🇧🇷 @volei and Netherlands 🇳🇱 @volleybalnl. Great moves by the Dutch team to counterattack and even better celebration for the 2-1! 🙌

Canada achieved its third win in a row at the WCH by defeating China 3-1 (25-22, 25-19, 21-25, 25-23). However, the game was nothing but easy, as the Chinese put on a valuable fight, making Canada work for every point, and finishing the game with an 18-7 blocking lead. John Perrin made all of the difference though, blasting out of the games for 9 points in the first set and 26 points total, being followed by Sharone Vernon-Evans with 14 points of his own. Chuan Jiang had 19 points in the losing effort.

Post match reactions are yet to be published by the FIVB.

Canada 🇨🇦 @VBallCanada tops Pool B and continues unbeaten after its triumph over China 🇨🇳 by 3-1. The best actions of the match 👇#FIVBMensWCH #volleyballWCHs #volleyball pic.twitter.com/8UWelprypD