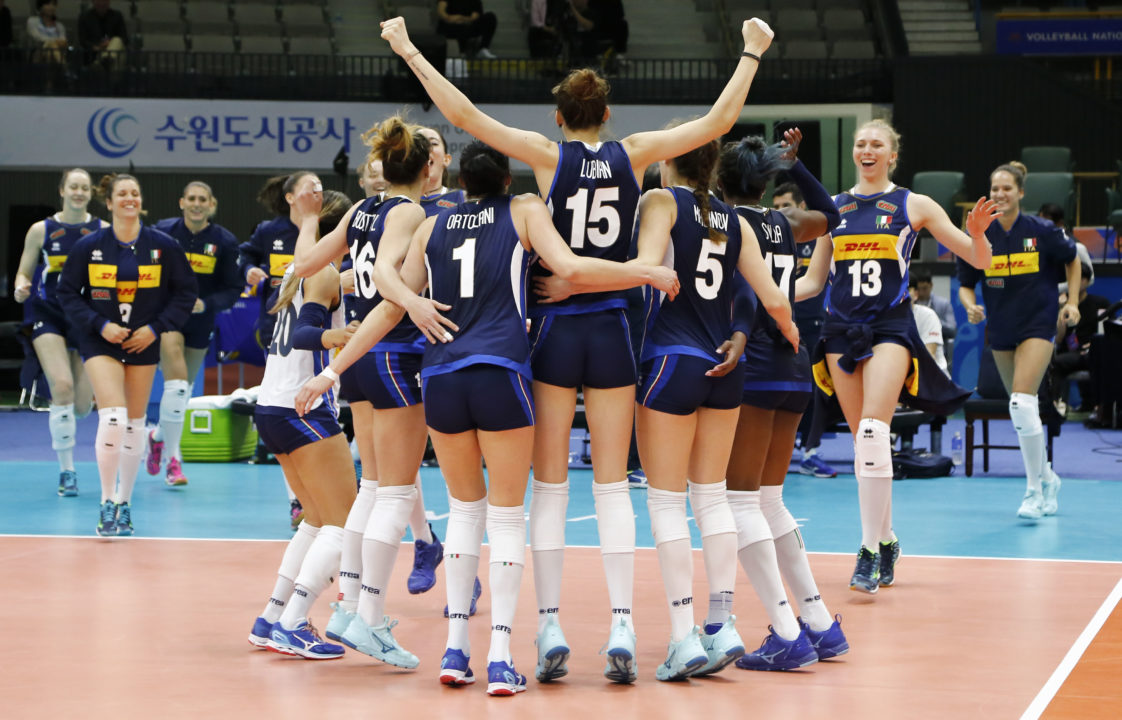 Italy earned its first win of VNL play with an all-around effort against Germany, while South Korea won its fourth straight, besting Russia in a sweep in Pool 7. Current Photo via FIVB

Italy earned its first win of VNL play with an all-around effort against Germany. The Italians bested the Germans in every statistical area: kills (37-31), blocks (11-6) and aces (7-3) to break into the win column.

Miryam Fatime Sylla (16), Serena Ortolani (14) and Marina Lubian (12) shared the scoring load for the Italians, while each managing a team-best three blocks. Sylla put together a strong performance on all sides of the ball adding 12 kills and an ace to her blocking prowess. Orotlani notched 10 kills, while Lubian and Lucia Bosetti turned in six putdowns each. Lubian also served up three of the team’s seven aces as the team settled into a rhythm.

Set 1 was a back and forth affair with the teams trading blows as well as errors. In the end, Italy scored four straight to claim victory. The Italians worked their way to a four-point edge in Set 2 and never looked back as Sylla racked up six points. The Germans continued to fight in Set 3, but could not break through, eventually succumbing as Lippman served long on match point to give Italy its first VNL win.

Italy coach Davide Mazzanti: “We had to win today’s match. It was important to win this game to bring up our entire performance. We were good at attacking and defense. Throughout this game, our pace was well maintained. The performance of today was the best so far.”

Germany coach Felix Koslowski: “They did really well in block and defense. They had very good control. They had patience to score the points. I think we missed a lot in our serves. Italy’s team’s serves were really good. They performed short and long serves. That made it difficult for us to receive. But the main point of today’s match for our team is we need more soul and spirit to win, which was missing today.”

Seventeen Russian errors and a 21 points effort from Yeon Koung Kim aided South Korea to an easy sweep on Wednesday, marking its fourth straight VNL victory.  The Koreans earned eight more points on opponent miscues (17-9), and bested in the Russians in all facets of the game: offense (44-33 in kills), net defense (8-5 in blocks) and serving (6-3 in aces) to stay among the top of the VNL standings.

Russia got 12 points from Irina Fetisova (8 kills, 3 blocks, 1 ace), but it was not enough. Ekaterina Efimova and Kseniia Parubets were limited to six kills apiece and Irina Voronkova managed just five for the Russians.

Koung Kim scored 10 of her 21 points in Set 3 to lift Korea to the sweep, which ended a long stretch of Russian dominance in the series (previously 43 of 49 wins).

Korea led by as many as six in the opening set victory. The home side jumped out to a 12-3 lead in Set 2 and continued to take advantage of several Russian miscues in a dominating 25-14 win. After taking a 13-9 lead in Set 3, Korea navigated a series of Russian comeback efforts before clinching the win on the serve of Lee Hyo Hee.