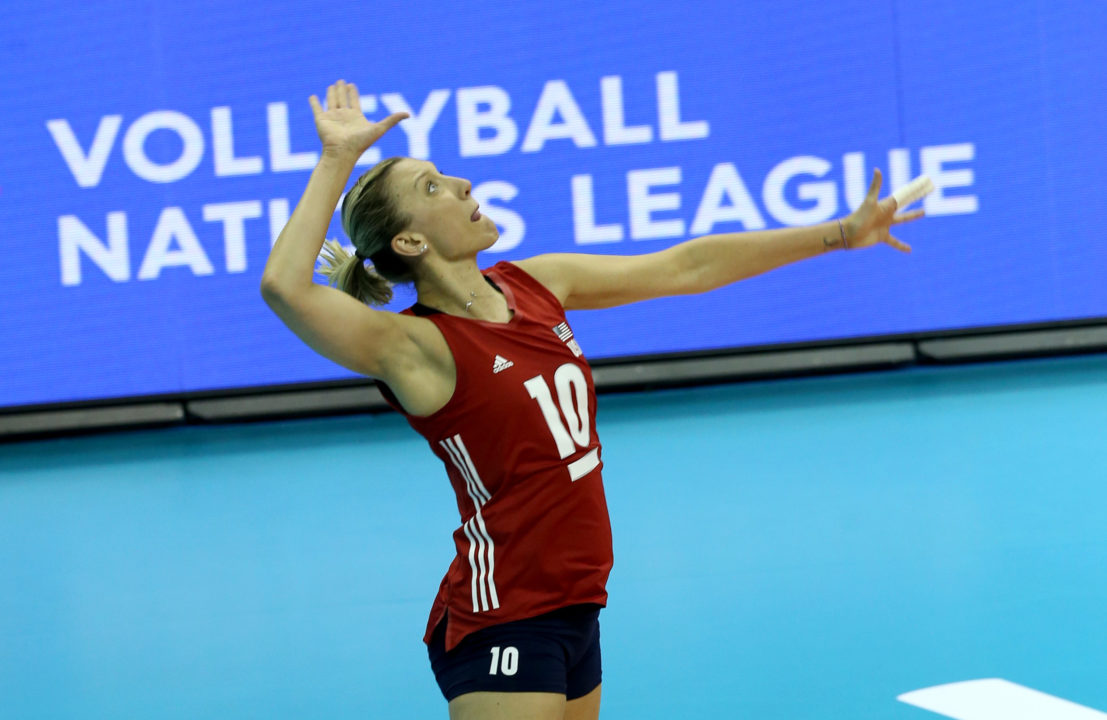 Five aces and a balanced offensive attack lifted the USA to a quick sweep of the Netherlands, taking down the final unbeaten side in Volleyball Nations League play. Meanwhile, Japan dominated Belgium offensively in a sweep to wrap up Day 2 play in Pool 5.  Current Photo via FIVB

Five aces and a balanced offensive attack lifted the USA to a quick sweep of the Netherlands, taking down the final unbeaten side in Volleyball Nations League play. The match was a homecoming of sorts as it pitted the Americans against a familiar face in former assistant coach Jamie Morrison, who is now the coach for the Dutch side.

Maret Balkestein-Grothues paced the Dutch with 14 points (11 kills, 3 blocks), while Lonneke Sloetjes added 12 (10 kills, 1 block, 1 ace). Four other players turned in three of more kills, but it was not enough to get past the United States.

In Set 2, the Americans trailed briefly at 15-14 but scored five straight to surge ahead. The Dutch countered to tie it up at 19 all, but in the end, USA staved off their foes for the victory.

The United States now stand atop the standings with 13 points with one match remaining in Week 2 play.

Netherlands captain Maret Balkestein-Grothues: “I think the US team did a good job. We were always working behind. We have to improve every day. In the third set we did good defense but it was too late.”

USA captain Jordan Larson said: “We are proud of ourselves. It was a lot of fun to battle against the Netherlands team. We are getting better.”

Risa Shinnabe and Sarina Koga provided a 1-2 punch for Japan, each notching double-digit points and kill tallies to guide the home side to a dominant victory.

Shinnabe turned in 16 points, 15 on terminations, while Koga pounded down 12 putaways as Japan outdid Belgium 52-32 in kills. That was enough to offset a 10-4 deficit in blocks and 4-3 Belgian lead in aces.

Mai Okumura (9), Yuki Ishii (8) and Mami Uchiseto (6) rounded out the scoring, each turning in more than six kills.

Japan took the early lead in both of the first two sets and cruised to victory behind captain Nana Iwasaka and Mai Okumura. The Belgians were a stronger foe in Set 3, boasting a short-lived lead, but in the end, could not hang on to extend the match.