Japan Rallies From Down 2-0 to Top Thailand, Turkey Sweeps Korea 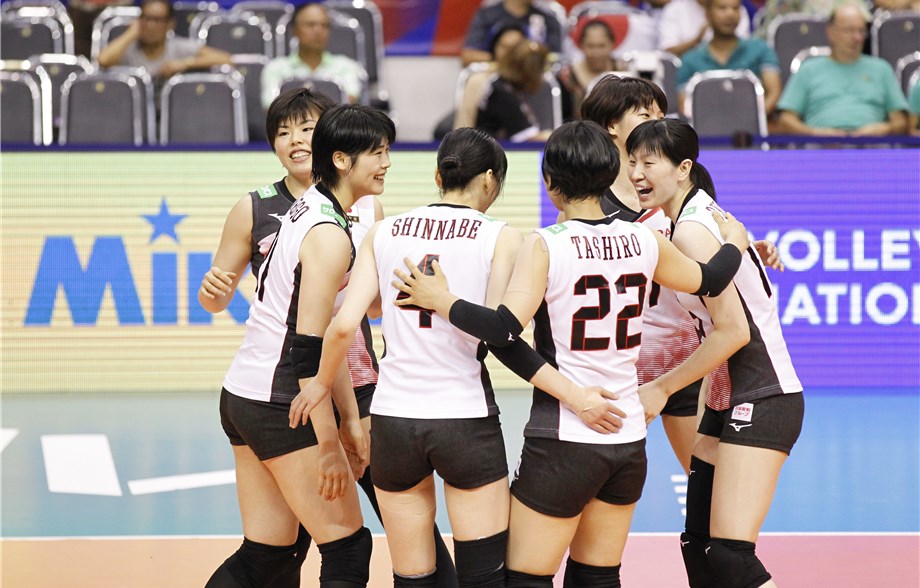 Turkey won its third straight match in Thailand with a dominant offensive showing in a sweep of South Korea. Japan mounted an awe-inspiring comeback effort, rallying from down 2-0 in the match, down five points in Set 4 and facing two match-points in Set 5 to steal away a victory over Thailand.  Current Photo via FIVB

Turkey won its third straight match in Thailand with a dominant offensive showing in a sweep of South Korea on Thursday.

The Turkish side boasted a 52-36 lead in kills and also led 7-2 in aces. The Koreans managed a 5-2 advantage in blocks and had help from 17 Turkish miscues to stay in the match. South Korea made just 12 errors.

A balanced attack saw five Turkish players notch eight or more points. Meliha Ismailoglu (12), Zehra Gunes (12), Meryem Boz (11), Seyma Ercan (9) and Eda Erdem Dundar (8) made up the group. Ismailoglu and Gunes turned in 11 kills and an ace each, while Boz chipped in 10 kills and a block. Ercan added seven kills and a team-best two aces alongside Dundar’s two perfect serves and six putaways.

Turkey rode strong serving by Gunes and Cansu Ozbay and Ercan’s offense to a 25-19 Set 1 win.

Korea boasted the early lead in Set 2, only to see the Turkish side grab an 8-5 lead by the first technical timeout. The Koreans stayed close, but could not find an answer for Gunes or Erdem Dundar.

Korea took advantage of Turkish miscues to build a three-point lead in Set 3. After more errors, Turkey found itself down five, but recovered with a 6-0 run including strong serving from Erdem. Hande Baladin came through offensively with five kills in the stanza as a substitute to help Turkey close out the match.

Turkey wing spiker Meliha Ismailoglu: “We are very happy about the victory today. We made a lot of mistakes in serving yesterday, but we tried not to do that again today. We are really happy about how we fought throughout the game even though our tempo went down in the third set, but we came back and finished the game in three sets. Next week, for sure, will be a very tough week for us but we will try to fight again as we did in our first week in America. We have played very well against very strong teams before and we will try to put on the same performances next week.”

Korea captain Kim Yeon Koung: “Turkey have done a very good job in this tournament. They have the height advantage. We expected a tough match. We had a good chance in the third set, but we missed out in crucial points. We will try to do better next week.”

Japan mounted an awe-inspiring comeback effort, rallying from down 2-0 in the match, down five points in Set 4 and facing two match-points in Set 5 to steal away a victory over Thailand. The Thai piled up 17 blocks and led Japan in kills, but could not overcome 31 errors in the loss.

Thailand started strong, going up by four early in Set 1, and rolling to a 15-7 advantage behind Onuma, Moksri and Kongyot. A block by Onuma helped the team down the stretch of the 25-19 win.

The home team erased a three-point deficit in Set 2 as Moksri and Onuma starred. A 4-0 run on the serving arm of Onuma gave Thailand some breathing room and a marathon rally gave the team a 2-0 lead in the match.

Japan began its turnaround in Set 3 as Kurogo heated up. A seven point run seemed to put the set out of reach for the Japanese, but the team would have to fight off a late rally before securing the 25-17 victory.

Thailand fought back in Set 4, building a 9-5 lead with help from three straight Bamrungsuk aces. Japan rallied with five straight points and went on to finish the stanza on a 10-1 run to force the fifth set.

The Thai team pleased the home crowd, going up 10-8 in Set 5 with help from Bamrunsgsuk and Moksri. Kurogo answered to tie the set at 11-all. A kill by Onuma put Thailand on top 13-11, but again Japan knotted the score. Neither team could convert on match point tries down the stretch as it took Japan six attempts to finally claim the 22-20 victory and break the home crowd’s hearts.