Kentucky Comes From Behind in Second Round of NCAA Tournament 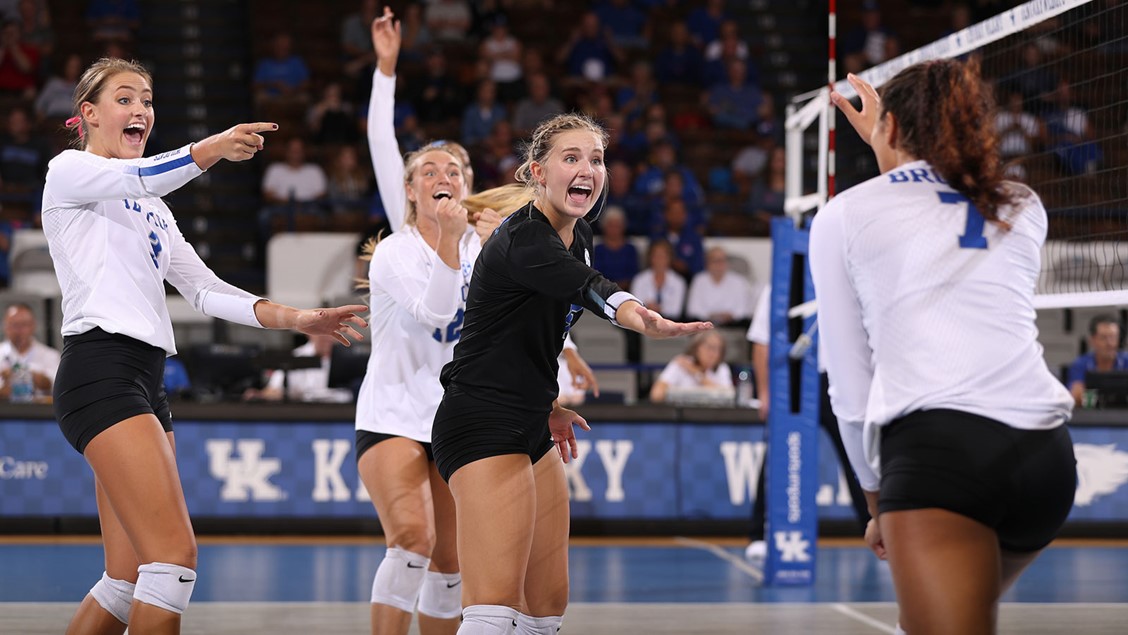 LEXINGTON, Ky.– Kentucky defeated Western Kentucky on Saturday night in the second round of the NCAA Tournament in Memorial Coliseum at Kentucky. The Kentucky Wildcats have now moved on to the third round for the fourth time under Coach Skinner and this is the first time since 2012. Kentucky will host BYU in the third round of the tournament next weekend.

Kentucky setter, Madison Lilley, ran the offense for the Wildcats with 55 assists and 12 digs for another double-double for the freshman. Leah Edmond led the team in kills, putting away 22 balls on a .246 clip. Kaz Brown also had an impressive performance with 14 kills on an incredible .722 clip. The team posted 60 total digs on the night along with 11 team blocks.

Alyssa Cavanaugh fueled the Western Kentucky offense with 23 kills on a .405 hitting percentage. She was fed by setter, Jessica Lucas, who recorded 51 assists who now has 5,338 career assists and is the new program record-holder. The back row was controlled by libero, Sydney Engle, as she dug up 14 to go with 10 kills, earning her a double-double.

Match of the night!

LEXINGTON, Ky. – Throughout the 2017 season, the No. 6 Kentucky volleyball team has been in nearly every situation. However, there’s something a little different about your back being against a wall with your season on the line.

“Obviously these are special wins when you can comeback like that,” head coach Craig Skinner said. “That’s probably the toughest I’ve ever seen Kentucky volleyball play since I’ve been here. I’m really proud of the team for finding a way to get it done.”

As the No. 4 overall seed in the tournament, Kentucky will host an NCAA next weekend. UK will face BYU in the round-of-16 on a date and time to be determined. No. 5 seed Nebraska and Colorado will also travel to Lexington.

UK’s resiliency was impressive, and the Cats will march on to the Sweet 16 for the fourth time under Skinner and the first since 2012. Today’s five-set win is the second time the Wildcats have earned a five-set NCAA Tournament win under Skinner. The other came against Dayton in the opening round of the 2011 tournament.

Sophomore Leah Edmond was sensational offensively for the Wildcats. She boasted 22 kills, eight digs, four blocks, two assists and an ace in the victory. The 22 kills are the most for any player under Skinner in an NCAA Tournament match. She is also the first player in program history under his direction to have two career matches of 20 or more kills during the postseason.

The win moves the Wildcats to 28-3 overall on the season. Western Kentucky concludes its season at 31-4.

The decisive fifth set had a little bit of everything – and the boisterous crowd of 3,620 fans were in tune to every point.

Senior Kaz Brown opened the scoring with a conversion off the slide for the set’s first point. After a gutty dig from freshman Gabby Curry, Edmond picked up two straight out-of-system kills for a 3-0 UK lead. Kentucky then forced the Hilltoppers into an erroneous attack to increase its lead by four prompting the visitors into an early timeout. Following the break, WKU got on the board with three-consecutive points. Edmond snapped the mini-run with yet another kill. When the Hilltoppers pulled to within one once again, Edmond answered to give UK back a multi-point lead at 6-4. Freshman setter Madison Lilley followed with her fourth ace of the match. A service error by the visitors enabled Kentucky to take an 8-5 advantage into the switching of benches.

WKU would not go away and bridged the gap to one on two more occasions, but Kentucky kept finding answers. A cross-court shot by freshman Avery Skinner ignited the crowd with Kentucky up 11-8. The Hilltoppers chose to take their final timeout.

Out of the break, WKU scored back-to-back points to bring the score within one yet again before a service error snapped the spurt. The visitors continued to fight and eventually tied the score at 12 following back-to-back kills with Kentucky opting for a timeout.

Following the break, Kentucky turned to Edmond who delivered. Following another spectacular dig by Curry, Lilley found Edmond cross-court to give the Cats match point. The winning point came when UK’s defense again came up big. The Hilltoppers committed an error to enable the Wildcats to complete the comeback effort.

Brown was a momentum-changing machine with 14 kills on a sizzling .722 attacking percentage and a match-high nine blocks. During sets three and four, as UK mounted its comeback, it was Brown who made play after play and had a knack for the crowd-entertaining moments.

Skinner matched her opening-round kill output with 14 hammers on a .367 average. Senior Emily Franklin contributed six kills, while junior Brooke Morgan came off the bench to make an impact with five kills and a pair of blocks.

“Every one of those players in that locker room can play at a very high level,” Skinner said. “I’m not afraid at all to put them in in situations. This match called for Merideth (Jewell) and Brooke (Morgan). We get to see it every day in practice, so when you make the sub, you have no doubts that they can make an impact.”

In a sport in which offensive numbers jump off the box score, Kentucky’s comeback would not have been possible without the outstanding effort by the backline defense. Senior Ashley Dusek led the charge with 16 digs. However, three-rotation players Curry and junior McKenzie Watson may have made the greatest impact with a number of rally-saving plays. Curry had nine scoops, while Watson added seven. Junior Merideth Jewell contributed three digs in three sets of action to aid the winning cause.

Lilley again had a night to remember. She dished out 55 assists and logged a match-high four aces. She also tallied 12 digs and a trio of blocks. The Southeastern Conference Freshman of the Year registered her team-leading 10th double-double of the season.

Set One
WKU was able to convert a kill for the match’s first tally. Skinner immediately responded with a touch kill to even the score. From there, the visitors put the pressure on and eventually earned a four-point edge at 6-2. After Kentucky came within two at 6-4, the Hilltoppers scored the next three for a 9-4 advantage. WKU maintained at least a three-point lead until it was able to take its largest advantage of the frame at 17-11. It was all the more room the Toppers would need en route to a 25-16 opening-set win.

Set Two
Much like the opening frame, WKU posted the first point off a kill. Brown quickly retaliated with a conversion off the slide. From there the teams would trade points until WKU earned a three-point edge at 6-3. After pulling back to within one on five occasions, Kentucky eventually knotted the score at 12 after Lilley moved WKU out of system with a powerful serve. The Hilltoppers answered with two straight points, however, to claim a multi-point advantage. At the media break, WKU owned a 15-13 lead. Brown and Morgan teamed up for a rejection to tie the score this time at 15. Lilley called her own number with a crafty kill which helped Kentucky claim its first lead at 16-15. Edmond lifted the Wildcats to a three-point edge at 20-17 with her sixth kill of the night prompting a WKU timeout. Following the break, WKU scored three straight to tie the score at 20. The run continued for the visitors following a Kentucky timeout as they recaptured the lead and eventually pulled away for a 25-22 second-set win and a 2-0 lead in the match.

Set Three
Western Kentucky jumped out to a 2-0 lead to begin the third stanza. Franklin converted off a quick set and then Skinner keenly found a spot in the back row to tie the score at two apiece. Edmond then had an ace to give UK a lead, but WKU responded with a 3-0 run and a 5-3 lead. Morgan and Brown teamed up for a Big Blue block to knot things at five. Play seesawed until the Hilltoppers converted an ace for an 8-6 advantage. Lilley’s ace helped tie the score again, this time at 12. From there the teams exchanged points until Skinner smacked three-consecutive kills to give Kentucky a 19-16 advantage. Following a WKU timeout, Brown and Lilley teamed up for a massive rejection and the score moved to 20-16. Skinner’s hot play continued with a sneaky kill that fooled the defense for the final point in a 6-0 UK run. The string of points enabled the Cats to push through and Edmond sent home the final kill for a 25-19 set win.

Set Four
WKU for the fourth time in the match scored the set’s first point, but the Hilltoppers gave the point right back with a service error. The teams swapped points until a Franklin ace gave UK a 4-2 edge. Edmond had a slicing kill along the sideline to lift the Blue and White to a 7-4 lead and the visitors chose to take a timeout. Lilley’s third ace of the night gave UK a 10-6 advantage. WKU eventually got within one at 14-13, but UK answered with a slide from Brown. The Toppers would not go away and again bridged the gap to one at 16-15, but Edmond fired cross-court to quell the threat.  A block from Brown and Skinner pushed the home team’s lead to four at 22-18 with the momentum clearly on UK’s side of the net. Edmond finished it off with her 16th kill of the match for a 25-21 win to even the match at two sets apiece.