No. 1 Penn State Stuffs Pitt 17 Times to Advance to Sweet 16 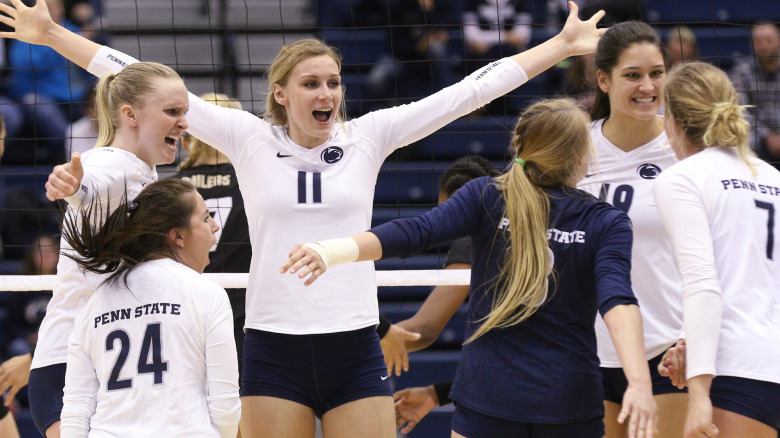 UNIVERSITY PARK, Pa. – No. 1 overall seed Penn State faced another test at home Saturday night, but they will live to fight another day in the friendly confines of Rec Hall with a four-set win over instate foe Pittsburgh.

After playing to a 19-all tie in Set 1, Penn State finally pulled away with a 6-1 run, including three straight kills by Frantti and two more by Lee and Thelen to close it out.

The Nittany Lions jumped out to a 5-1 lead in Set 2, but Pitt rallied back to take an 11-9 lead of its own. Williams notched three kills and Lund added two in the comeback. The teams tied four times, last at 16, before the Panthers pulled away with a 4-0 run, including three straight PSU miscues. Penn State cut the margin to one twice, at 22-21 and 23-22 with help from two kills and a block by Washington. A service error gave Pitt a set-point try, but Lee thwarted the attempt. Lund wrapped up the 25-23 win to even the match.

Penn State snapped an 8-all tie with a 9-3 run, including three kills and a block by Washington and an ace by Bryanna Weiskircher. After trailing 17-11, Pitt pulled within three at 21-18 with help from a trio of Van Buskirk putaways. Lee downed two kills and Gorrell and Detering teamed up for a block to make it 24-19 PSU. The Panthers thwarted three set-point tries, before Lee capped the 25-22 win.

PSU led 13-8 midway through Set 4 thanks to a 5-1 run, including two Frantti kills and a solo stuff by Lee. Pitt answered with a 3-0 run, including two Nittany Lion errors. Penn State turned the 13-11 lead into a 22-15 advantage with three stuffs and kills by five different players. Two more blocks by Washington and Detering made it 24-17. A pair of hitting errors extended the set, before the Nittany Lions clinched the win with their 17th block of the night as Gorrell and Detering teamed up.

While it was an extremely aggressive match offensively, defense proved to be the difference maker in the match as Penn State out-blocked Pitt, 17.0-5.0.

Penn State finished the match hitting .312 on the evening, while Pitt hit .240, including a .057 fourth set outing that sealed the match for the Nittany Lions.

The aggressive trend continued into the second set as both teams put down 16 kills with Pitt hitting .306, and Penn State hit .300. However, the Nittany Lions made four service errors in the second set, and Pitt evened the match up at 1-1 with a 25-23 win.

Out of the break, Penn State looked to its block to get rolling. Through the first two sets, the Nittany Lions combined for just 3.0 team blocks, but in the third set, Penn State tallied 5.0 blocks and helped hold Pitt to a .268 hitting percentage. Offensively, Penn State hit .342 and put down 17 kills, including five from each Simone Lee (Menomonee Falls, Wis.) and Haleigh Washington (Colorado Springs, Co.).

In the final set, the Penn State block proved its dominance as the team combined for 9.0 in the fourth set alone. Tori Gorrell (Oakville, Ontario) tallied five stuffs, while Abby Detering (Mentor, Ohio). The defense helped stifled the Pitt offense to just .057 and 11 kills in the last set.

Out of the middle, Washington put down 16 kills on a .483 hitting percentage and added seven blocks and three digs. 16 kills marks a new NCAA Tournament high for the middle blocker. Gorrell, Washington’s fellow middle, added six kills and a new NCAA high mark of seven blocks.

Detering put together an all-around complete performance as the setter-hitter dished out a team-best 31 assists, adding 14 digs for the double-double. She also put down six kills and tallied five blocks. Her counterpart in the 6-2, Bryanna Weiskircher (Rockford, Ill.) dished out 28 assists, adding six digs and two service aces.

The Nittany Lions will play the University of Missouri on Friday, Dec. 8 in Rec Hall. The time of the match is to be determined. Michigan State will also be at the University Park Regional and will play the winner of the Illinois/Washington match which will conclude late Saturday evening.

For the second consecutive year, the University of Pittsburgh volleyball had its season come to a close in the second round of the NCAA Tournament at the hands of Penn State. The No. 1 team in the country defeated the Panthers in four sets Saturday evening at Rec Hall in State College.

Against a hard-hitting Penn State offense, the Panthers won the dig battle 61-55, but were unable to post a strong enough attack despite four players tallying double-digit kills and four earning double-doubles.

For the second-straight match sophomore Nika Markovic, freshman Kayla Lund, redshirt sophomore Stephanie Williams and sophomore Layne Van Buskirk all posted 10-plus kills, while all but Van Buskirk tallied double-doubles. Markovic led the pack with 16 kills and 12 digs, while Lund followed with 13 kills and 11 digs.

Williams put up 12 kills and earned 10 digs, while Van Buskirk rounded out the double-digit attackers with 11.

Junior setter Kamalani Akeo was strong once again tonight, posting 46 assists, while digging up 11 balls to round out the list of players with double-doubles.

Defensively, redshirt junior Angela Seman led the both squads with 16 digs, while Van Buskirk and senior Alex Rosignol each finished with two blocks.

The two teams battled from the start of the opening set. Pitt led out of the gate but Penn State battled back to find a 15-13 lead at the media timeout.

The Panthers regained the lead thanks to Lund, who blocked PSU’s Abby Detering on the right side, giving Pitt an 18-17 lead late in the set. Despite coming back, Penn State pushed back out in front with back-to-back points to pull ahead 21-19 and force a Panthers timeout.

Just a point later as the Nittany Lions scored one out of the break, Pitt called its second timeout as they trailed by three. Penn State held on for the win as they outscored the Panthers 4-1 in the final points.

Pitt knotted the match at one set apiece after bouncing back to take the second set 25-23. The Panthers posted 16 kills in the set and hit .306 led by Williams with six.

The two teams opened in a close race, but it was Pitt who found a two-point lead at the media timeout. Penn State battled back to tie the set at 16 all, however, back-to-back errors by the Nittany Lions forced the home team to call their first timeout.

Out of the break, errors continued to plague Penn State as three of the Panthers’ four-straight points were thanks to the Nittany Lions. Pitt led by four, 20-16, but took a cautionary timeout just points later as PSU pulled within two, 22-20.

The Nittany Lions closed the gap even more out of the break, scoring their third-straight point to pull within one, but a service error brought along their second timeout.

Penn State was unable to make the comeback as a service error and a final kill by Lund gave the Panthers the set.

Despite a late comeback effort that saw Pitt fight off three set points, the Panthers fell 25-22 in the third set and fell behind in the match 2-1.

Penn State had all the momentum at the start of the set, as the home team forced Pitt to call two early timeouts after the number one team pulled ahead by five, 13-8.

The Nittany Lions held that lead late into the set but the Panthers didn’t go down without a fight. With Penn State having set point, Pitt forced the Nittany Lions to have to call a late timeout as a kill by Lund and an attack error shortened Penn State’s lead to three, 24-21.

The Panthers were unable to complete the comeback despite fighting off its third set point after the timeout.

The Nittany Lions secured their trip to the Sweet 16 with a 25-19 victory in the final set.

Pitt fell behind from the get go in the fourth set, and was forced to use its first timeout when it was down four, 11-7. The Panthers were able to keep it close for a while but a three-point run by the Nittany Lions extended their lead to six, 18-12. Pitt called its final timeout of the match at this point.

Out of the break, the Panthers never quit battling, even after Penn State earned match point 24-17. Pitt forced a late timeout call from the Nittany Lions after fighting off two winning points, but Penn State returned from the break to close out the match with a final block.