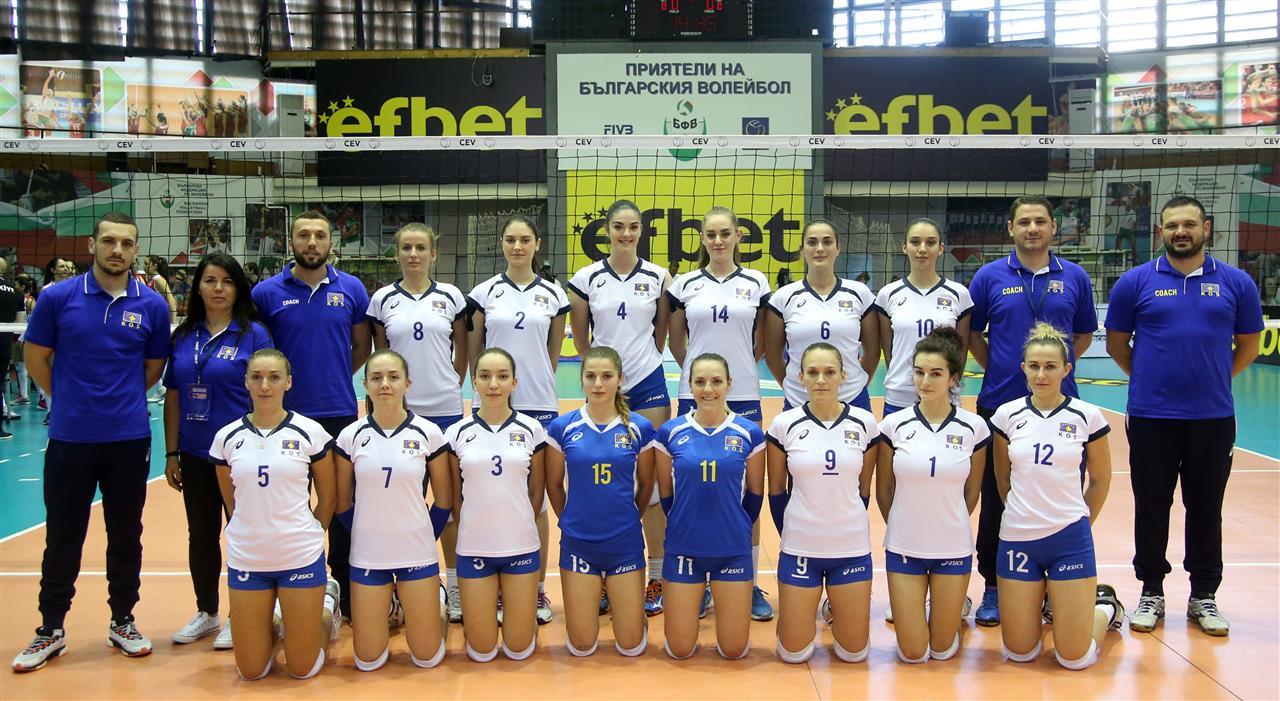 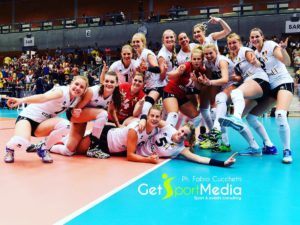 Turkey, host Bulgaria and Romania swept the competition to kick off Pool C play in Sofia, Bulgaria. Turkey defeated Kosovo in three sets, but the match meant much more than the result as it marked the first international competition for the Kosovo women. Last week, the Kosovo men made their debut and picked up their first set victory.

“This match was really special for me and my team, because for the first time in history we represent our country in such a big tournament,” Kosovo’s Nazmie Ibrahimi said. “As you know we are the youngest country in Europe and it is great pleasure to be here. Turkey is a great team, we knew that and we tried to do our best. However, for us it is important to continue to work even harder and hopefully one day we will be able to put up a fight and be successful even when playing strong opponents such as Turkey.”

Kosovo managed six aces, but struggled with its serve, making six errors and not recording an ace. Turkey hit at a 58 percent clip, while limiting Kosovo to a 20 percent effort.

We tried to play with a lot of discipline in all aspects of the game,” Turkey’s Guldeniz Onal said. “If our block did not work so well, they ended up scoring, so this means that we have to improve on this element for the next matches. However, I am confident that the level of our performance will improve in time for the big match with Bulgaria. Step by step, match after match we will play better and better.”

“Of course, it was not a difficult match and I’m happy because all of my players had the opportunity to take to the court,” Turkish coach Giovanni Guidetti said. “This is only the first day of the tournament and it’s really important that all players join the competition and feel the atmosphere of it. I am very happy with this. Kosovo tried their best and I want to congratulate them because they never gave up. They fought for every ball even when the situation was difficult. Respect for Kosovo!”

After the first two sets, Bulgarian coach Ivan Seferinov switched out his lineup, but despite a stronger Swiss effort, the home team secured the win. Bulgaria led 16-9 and 21-13 in the final set, but allowed Switzerland to close the gap late in the victory.

“We were really concentrated but as you could see from the third set, when we lose focus, we immediately start making mistakes,” Bulgaria’s Emiliya Nikolova said. “Tomorrow I expect to start with our six best players. For sure Romania is a tough opponent, but we won our last two matches against them last year and back then we showed that if we play at our level, they do not stand any chance against us.”

Bulgaria hit 55 percent as a team and served up 10 aces to keep the Swiss off balance. Switzerland hit just 26 percent for the match, but outblocked the Bulgarians 5-2.

“Bulgaria served really strong,” Switzerland’s Sarah Troesch said. “They are very experienced and tall. Bulgaria played well from start to end and it was a little bit difficult for us, but I think in the third set we finally found our game. We scored 20 points and this is actually good. Bulgaria and Turkey are the best two teams in this pool but we will try to keep the level from the third set and take it to the next matches.”

Maja Storck led all hitters with nine points, including a match-high eight kills.

Montenegro led by as many as five in the first set, before relinquishing the lead. Down 16-13 at the second timeout, Romania rallied for the 25-23 win. The Romanians never trailed the rest of the way.

“For us this is a very important tournament,” Romanian captain Adina Salaoru said. “We really, really wanted to start with a victory. We are glad that we finally managed to beat Montenegro, because we are teams of the same level but maybe today we were the luckier ones. Bulgaria is a really strong team but you know, anything can happen in sport.”

Romania outblocked Montenegro 10-6 and outhit them 45 percent to 34 percent in the sweep. Ana Cristina Cazacu led all scorers with 13 points, including a match-high 11 kills. Roxana Iancu added 11 points with seven kills, three blocks and an ace.

Danijela Dzakovic added 11 points, all on kills, while Nikoleta Perovic chipped in 10 points, including nine kills.

“Today the difference was 25 years,” Montenegro coach Dragan Nesic said. “We had three players on the court who are only 15 years old. I am happy I can provide them with the opportunity to play at this level because they have a lot of potential and a bright future ahead. Congratulations to Romania. I hope in future my team will grow so that the next time we can beat them.”

Romania take win in Pool C against @OdbojkaskiSavez as we near the end of a busy day of #FIVBWomensWCH #Volleyball … pic.twitter.com/tiKb7RGKJn