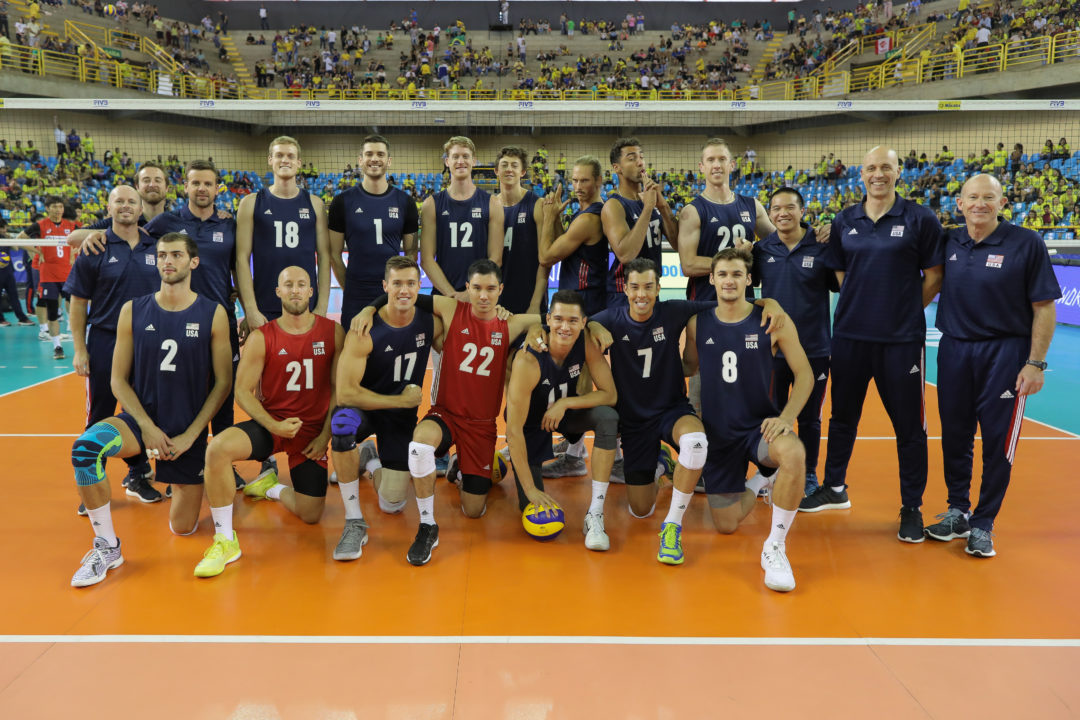 Relative newcomer Jake Langlois and two-time Olympian Matt Anderson were the dynamic duo for the United States, each turning in double-digit scoring efforts to lift the Americans to a sweep of South Korea on Saturday.  Current Photo via FIVB

Relative newcomer Jake Langlois and two-time Olympian Matt Anderson were the dynamic duo for the United States, each turning in double-digit scoring efforts to lift the Americans to a sweep of South Korea on Saturday.

Seung-Suk Kwak was the top scorer for Korea with seven points (6 kills, 1 ace). Nine other players scored for the Koreans, five adding three or more points. Sung-Min Moon (5), Jiseok Jung (4), Kyumin Kim (4), Jae -Duck Seo (3) and Gyeong-Bok Na (3) made up the group. Only Kim and Kwak started all three sets, while Seo, who has paced the team in VNL play, saw action as substitute in just Set 2.

Team USA led Korea in kills (43-28) and blocks (8-2), while each team managed just one ace. The Americans still have improvements to make, committing 23 errors, with 11 coming in the first set, while getting help from 22 miscues from Korea.

The teams played to a 16-all tie in Set 1, before a Langlois putaway gave the United States a slight edge at 21-19. After another knot-up at 22, Averill’s serving gave the USA a set-point attempt and DeFalco came through with the decisive final kill at 25-23.

Set 3 was more of the same as Team USA rode Smith and DeFalco and issued a 25-11 drubbing to Korea, which has yet to win a set in five VNL matches.

USA coach John Speraw: “We did not start this match very well, particularly in the service aspect. So it was a little bit concerned but fortunately we came back in the match. I hope we can start better tomorrow. We have finished both matches with great consistency.

“I am pleased with our ability to come back, stay focused and get better every set. Even when we know that things are going very well, there’s a lot of space for improvement, but there are good things too.

“Jake Langlois had his chance to play today and he responded great. He is a great team-mate, works hard, and he is young. I am really pleased with his developments.”

USA player Jake Langlois: “I live in Brazil for two years, doing volunteer work and serving people. It was a fantastic experience and I’m really happy to have performed well in Brazil. I’m happy for the team’s victory. That’s the most important thing, but I am also glad to be today’s best scorer. I think that I took my chance really well and I want to improve more. I miss being here in Brazil and I hope we can have a good performance against them tomorrow.”

Langlois made his VNL debut in the match.

The team utilized both of its liberos, with Dustin Watten splitting time with Shoji. Setter Kawika Shoji saw limited action.