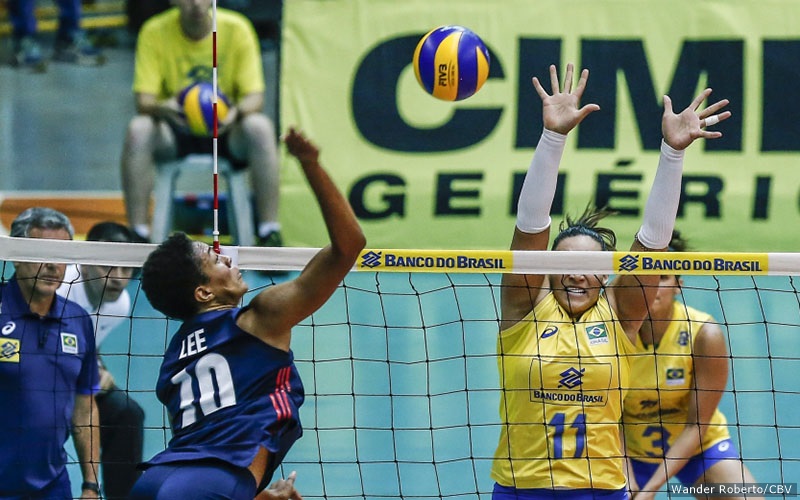 The U.S. Women's National Team is 3-for-3 against Brazil this week, following up wins on Sunday and Tuesday with a five-set rally on Thursday. Current Photo via USA Volleyball

The U.S. Women’s National Team is 3-for-3 against Brazil this week, following up wins on Sunday and Tuesday with a five-set rally on Thursday.

In tiebreak, Team USA went up 6-1 early and held on for the 17-15 win to complete the comeback.

In Set 2, the Brazilians opened with a 4-0 lead, only to see the USA catch up at 5-all. Down 16-10, the Americans dug deep, vaulting ahead 21-20, but could not pull off the comeback, falling 25-23. In the 11-4 rally, Adams and Hancock served up aces and Drews and Lee supplied the offense, while Gibbemeyer notched two blocks to tie the score at 20-all. Lee put the USA on top at 21-20, but Brazil scored five of the final seven to go up 2-0 in the match.

After falling behind 2-0, the United States pushed ahead 7-4 including four straight Brazilian miscues. Brazil settled and regained the lead at 11-10 and went on to a three-point advantage at 15-12. Points from Lee, Drews and Hancock brought it to a 15-all tie. Two more Brazilians errors and a stuff by Rachael Adams put Team USA on top 21-18. A Lowe putaway and Lee block capped the 25-21 win.

Brazil led 10-6 early in Set 4, but the Americans pulled even at 13-all with help from kills by Lowe, Adms and Gibbemeyer. Drews and Kingdon Rishel provided the offensive firepower to tie it up again at 16. A Carlini ace and two Kingdon Rishel putaways gave the USA a little cushion at 19-17, but Brazil scored three straight to steal back the lead. Brazil called timeout trailing 23-22, before Gibbemeyer evened the match with a block and a kill which sealed a 25-23 victory.

The Americans scored six of the first seven points in tiebreak, including kills by Lowe, Kingdon Rishel, Adams and Lee. Gibbemeyer added a putaway to help push the margin to five at 9-4. The Brazilians chipped away, cutting the margin to two at 12-10 and eventually saving three match points to knot it up at 14-all. After another tie at 15, a Kingdon Rishel putaway and Gibbemeyer ace completed the five-set win for the visitors.

The teams will meet one last time on Saturday in Rio de Janeiro at the Maracanãzinho where the Americans won bronze at the 2016 Olympics.