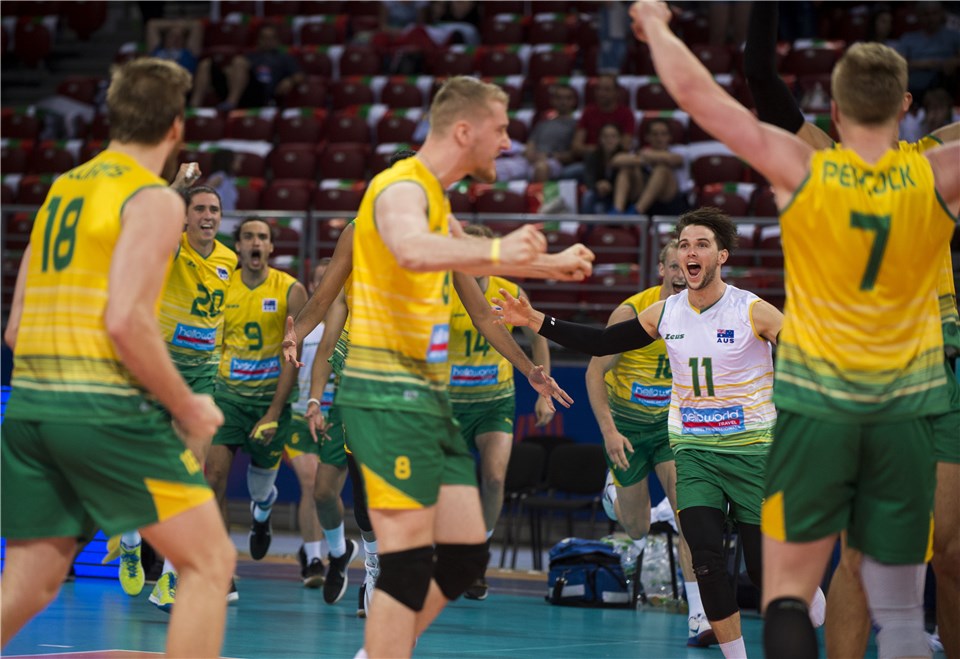 Drazen Luburic racked up 29 points, including 28 kills, and Serbia capitalized on 32 Russian miscues for its second straight five-set win. Australia broke into the win column, scoring a slight upset over 14th-ranked Bulgaria, winning via sweep of the home team on Saturday.  Current Photo via FIVB

Drazen Luburic racked up 29 points, including 28 kills, and Serbia capitalized on 32 Russian miscues for its second straight five-set win.

Luburic accounted for nearly half of his team’s putaways with 28, while also managing an ace. Marko Ivovic and Srecko Lisinac followed with 13 points apiece, combining for 20 kills. Ivovic downed 11 kills and served up two aces, while Lisinac was credited with nine kills, two blocks and two aces. Nikola Jovovic, who started the match and played sparingly in Sets 2 and 3, put up a team-leading three blocks.

Four Russian played boasted double-digit scoring efforts and a fifth was just behind that pace, but it was not enough. Dmitriy Muserskiy racked up 23 points, with 17 kills, five blocks and an ace, while Egor Kliuka pounded down 18 putaways. Konstantin Bakun chimed in with 17 points on 15 kills and two blocks. Ilia Vlasov managed 10 points with six kills, three blocks and an ace. Anton Karpukhov rounded out the scoring with eight points (5 kills, 3 blocks).

Serbia led 8-6 at the changeover in Set 5, but Russia rallied and grabbed a 12-11 advantage of its own. Serbia tied it up and then surged ahead by one on a Luburic ace. His strong serving kept Russia off balance and set up a final putaway by Lisinac.

Set 2 was level at 23-all when a Lisinac kill gave Serbia a chance at the win. Ivovic put the final nail in the 25-23 victory.

Serbia built an early lead in Set 3, but Russia stayed closed, pulling within two in the latter stages behind Kliuka’s efforts. A stuff on an out-of-system ball put the Serbians up 2-1 in the match.

Russia countered in Set 4 and Karpukhov hammered down a kill to send the match to a decisive fifth set.

Australia broke into the win column, scoring a slight upset over 14th-ranked Bulgaria, winning via sweep of the home team on Saturday.

Lincoln Williams continued to lead Australia in scoring, but this time had enough help to secure the victory. Williams notched 15 points (13 kills, 2 aces), while four other players aided the effort with six or more scores. Paul Sanderson (10), Luke Smith (9), Trent O’dea (7) and Beau Graham rounded out the attack. Smith put down nine kills and O’dea added seven. Sanderson chipped in six kills and added two blocks and two aces, while Graham paced the team with three blocks to go with three putaways.

Nikolay Uchikov and Nikolay Penchev led the charge for Bulgaria with 11 and 10 points respectively. Uchikov put down a team-high nine kills and added two blocks, while Penchev tacked on seven kills and a team-leading three stuffs. Todor Skrimov started just the third set, but managed six points on three kills and a team-best three aces. Bulgarian setter Georgi Bratoev turned his ankle after landing on an Australian blocker’s foot in Set 3, bringing on Georgi Seganov to replace him the rest of the way.

Australia broke away late in Set 1, going up 23-18. A Bulgarian challenge prevented the Aussies from earning a set-point try and the momentum followed, as the home side narrowed the gap to two. A service error gave Australia its first chance at the set, but a Bulgarian block kept the stanza going. Smith banged down a pipe set to clinch the 25-23 win.

Set 2 had it all including a yellow card for Sanderson in the early going. The teams were knotted at 14-all midway through. Australia erased a 20-18 Bulgaria lead, but the teams were soon tied again at 23. Sanderson came full circle from the doghouse to the winner’s circle with an ace to cap the 25-23 win.

Bratoev checked out of the match with the ankle injury as his team led 7-6 in Set 3, but the addition of Skrimov to the lineup had Bulgaria up 16-13 midway through. Bulgaria looked to be in prime position to extend the match, leading 24-22, but the team gave away the stanza on errors, presenting the Aussies with their first VNL win.