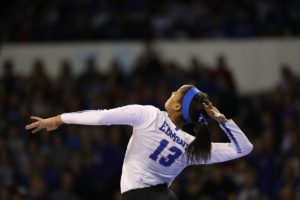 The latest Cumulative Top 50 featuring contributions from the VolleyMob, AVCA and RPI polls.

The top three continue to stand strong in the AVCA Top 25 poll, but Stanford is gaining ground on BYU in number of first place votes. Purdue and Missouri each moved up four spots, while Northern Iowa and Tennessee joined the rankings.

Purdue made a big jump from outside the top 20 to #16 behind a five-set comeback against Penn State.

The top four – BYU, Stanford, Minnesota and Penn State – remained the same in the AVCA Top 25 poll, but the Cardinal did pick up two additional first place votes on Week 9. New to the poll on Week 9 are Missouri, which jumped in at No. 24 with a five-set upset win over then No. 11 Florida on Sunday, and UCF, which garnered its first ever AVCA ranking at No. 25.

VolleyMob Top 25 Power Rankings (Week 9): Illinois Back in the Top 5

Illinois made a jump back into the top five following a wild week of play.

The latest Cumulative Top 50 mashes together three ranking systems to one in week eight.

Illinois remains steady at third in the latest RPI where the top three is the same and the rest is mostly shuffled.