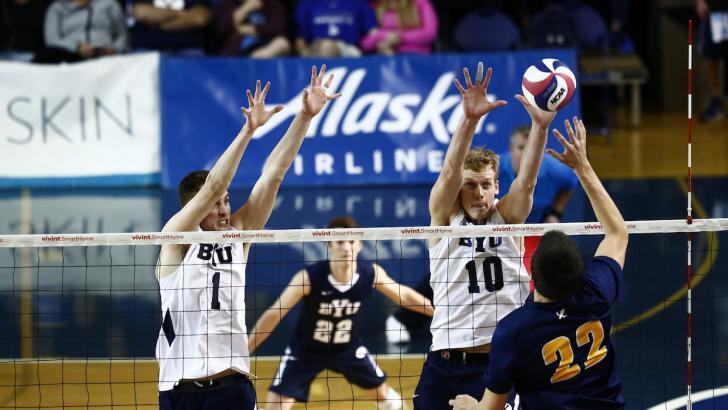 After dropping the first set, the Cougars cruised to a four-set win, behind a 12-block effort.  Archive Photo via BYU Athletics

No. 3 BYU dropped the opening stanza, but rolled after that, taking a four-set road win at UC Santa Barbara on Thursday night.

The Cougars hit at a .365 clip for the match and used 12 blocks to hold the Gauchos to a .153 effort in the victory. Thirteen service aces also aided the effort.

The Gauchos put up a balanced attack with four players accounting for seven or more kills. Redshirt senior outside Jacob Delson led the way with nine, while freshman middle Keenan Sanders added eight. Sophomore outside Corey Chavers and sophomore middle Connor Drake chipped in seven apiece. Drake hit at a .636 clip, with no errors in 11 swings. Casey McGarry dished out 28 assists, while serving up a team-leading four aces and managing a team-best seven digs.

UC Santa Barbara hit at a .478 clip in Set 1, but BYU boasted the early 10-6 lead, thanks to a trio of aces. Chavers and Delson turned in two kills apiece at the Gauchos rallied to tie the game at 13-all. Two more Delson putaways knotted the score at 18. A pair of Langlois kills put BYU up 24-21, but UCSB scored five straight, including two kills by Delson and two Cougar errors, to snatch away the victory.

Down 9-6 in Set 2, UCSB rallied to go up 12-11 with two kills each by Drake and Sanders. The teams tied at 13, 16 and 19, before BYU pulled away with five of the next eight points, including terminations by Jarman and Dobbert. Langlois ended the set with a kill. BYU hit .480 in the stanza.

UCSB raced out to a 4-0 lead in Set 3, courtesy of three Cougar errors. The Gauchos returned the favor with four miscues of their own in an 8-2 BYU run, which put the Cougars up 8-6. The teams tied at 11, but from there it was nearly all BYU. Four blocks, including three by Grosh, helped the Cougars wrap up the set on a 14-5 run.

BYU led Set 4 from start to finish as the Cougars outhit the Gauchos .444 to .042. Six UCSB errors and an ace by Jarman put the Cougars ahead 11-5. UC Santa Barbara would get no closer than five the rest of the night. Five Gauchos miscues and a pair of aces helped BYU close out the road win.

“I’m proud of the way we stayed composed throughout the match after losing that first set,” BYU head coach Shawn Olmstead said. “We put a tremendous amount of pressure on UC Santa Barbara from the service line and that helped our defense get some good touches. Our pin hitters did a great job offensively for us tonight.”

As a team, the Cougars (22-3, 15-2 Mountain Pacific Sports Federation) collected 13 aces – most of the season and third-most all-time in BYU rally-scoring era history.

Langlois got things started off for BYU in the first set with an ace. The Cougars led by as many as four early, but UC Santa Barbara (10-15, 5-12 MPSF) kept things competitive, evening the score at 12-all following an ace. A Grosh kill maintained the BYU advantage at 18-16, and a Langlois kill gave the Cougars set point at 24-21. The Gauchos scored four-straight points, however, to claim their first set point. A final UC Santa Barbara kill sealed the comeback win 26-24.

The Gauchos got off to a strong 5-3 lead in the second set. Aces from Durkin and Langlois then helped BYU on a 6-1 run to take a 9-6 edge. After a timeout, UC Santa Barbara scored six of the next eight points to go back up 12-11. Multiple Langlois kills kept the Cougars in the set, ahead 17-16. A Tim Dobbert kill gave BYU set point at 24-22, and a Langlois kill ended the set for the Cougars 25-23.

The Gauchos came out on a tear in the third set, going up 4-0 early. BYU stormed back on a 4-1 run, capped off by a Sander, Jarman and Durkin block, to tie the set at 5-5. A Langlois kill put the Cougars ahead 11-8, and a Sander and Jarman block extended the advantage to four at 16-12. Another block, this time from Grosh and Durkin, put BYU up 22-15, forcing a timeout from UC Santa Barbara. A Ben Patch, Langlois and Grosh block then won the set 25-16 for the Cougars, putting them up 2-1 for the match.

The fourth set began with a slew of service errors on both sides, resulting in a 6-5 BYU lead. A Langlois kill extended the advantage to six, 11-5, before a Grosh ace made it 17-9. The Cougars continued to cruise from there, taking the set 25-15 on a Gaucho attack error.

BYU will face off against UC Santa Barabara for a second time Friday, April 7, at 5 p.m. PDT, at the Thunderdome for the Gauchos’ Senior Night. Live stats and a video stream will be available. Links can be found on the BYU men’s volleyball schedule page.

UCSB and BYU will play again on Friday evening at the Thunderdome, with a 5:00 p.m. first serve. The last home match of the year for the Gauchos will feature ceremonies honoring former head coach Ken Preston, the team’s three seniors, and departing long-time public address announcer Marc “Cubby” Jacobs.

Freshman setter Casey McGarry was the top performer for UCSB, leading the team with four aces, seven digs, and 28 assists. Senior Jacob Delson had nine kills to lead the Gauchos, though four players had seven or more kills.

BYU got its money’s worth at the service line on Thursday, with all six starters notching an ace as the team accrued 13 on the night. Brenden Sander was the top server for the Cougars with four aces, followed by Jake Langlois‘s three. Langlois led all players with 13 kills on 22 swings.

Though the Gauchos prevailed in set number one, it was actually BYU who led for the majority of the frame. UCSB hung tight with the Cougars until they pulled away late with a 4-1 run to set up game point at 24-21. Undeterred, UCSB went on to reel off five straight points to steal the game.

Corey Chavers got the ball rolling with a kill from the left side, then he went to the service line and keyed the rest of the run. Aided by a pair of Cougar attack errors, Delson provided two kills during the spree including the game-winning point.

Things were similarly tight in set two, with neither team gaining a clear advantage as late as 19-19. From there, a Tim Dobbert kill put BYU up by one before Dobbert ripped an ace to go up by two. The two teams would trade the serve from there on out, allowing the Cougars to even the match at 1-1.

Despite UCSB jumping out to a 4-1 lead, it was all BYU in the third set with the visitors eventually forcing the Gauchos into a -.172 hitting percentage for the set. The Cougars kept it rolling in game four, hitting at an efficient .444 and serving up three aces to clinch the match.