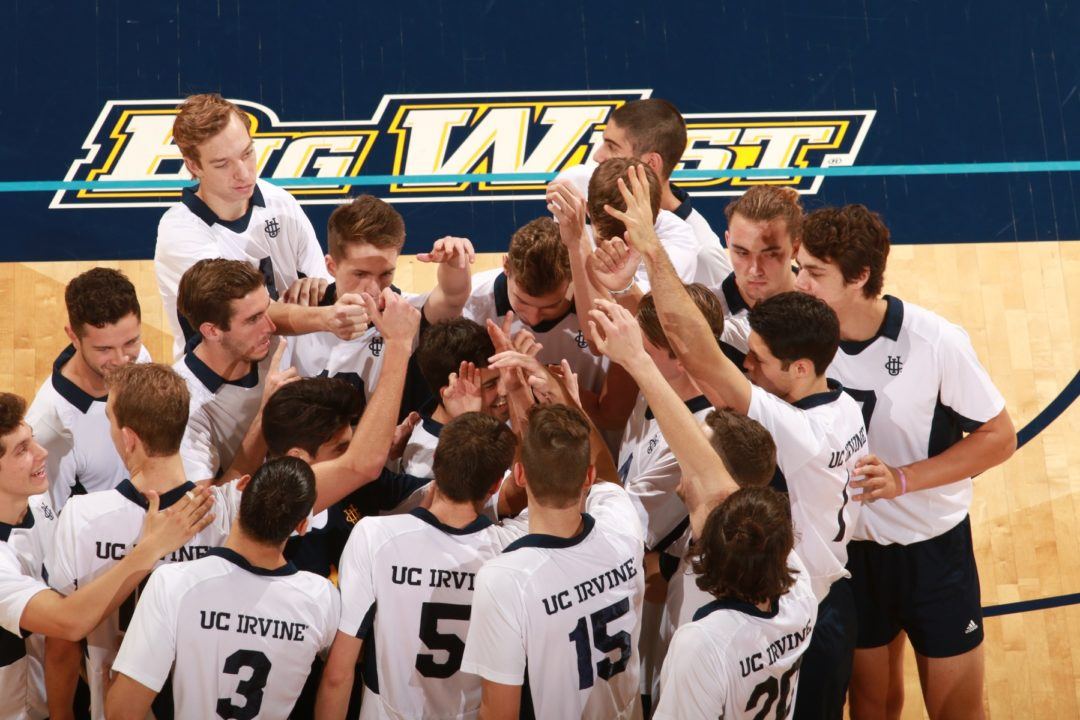 UCI hit .303 in the match and limited Stanford’s offense with a 16-block effort.

Junior outside hitter Aaron Koubi and senior opposite Tamir Hershko led UC Irvine offensively with 15 and 14 kills respectively. Koubi hit at a .320 clip and rounded out a double-double with a team-high 11 digs, while Hershko added six blocks. Senior outside Thomas Hodges followed with nine kills and two aces, while freshman middle blocker Scott Stadick put up a match-high 12 blocks and seven kills.

UCI scored four of the first five points of the night with help from a trio of Stadick blocks. The teams tied at 5, 6 and 7 before the Anteaters surged ahead 11-7. Stanford scored 12 of the next 17 points to turn the four-point deficit into an 18-16 lead, thanks to five UC Irvine miscues. A trio of Hodges kills put the Anteaters back on top 22-19. The Cardinal staved off two set point chances at 24-23 and 25-24 and even earned one of its own at 26-25 on a Rakestraw ace. It would take five more combined set point attempts (two for Stanford, three for UC Irvine) before UCI finished it off at 32-30 on a Hershko putaway.

UC Irvine led Set 2 wire to wire, leading by as many as eight at 17-9. Two blocks and a kill by Stadick aided an 8-1 mid-set run. Stanford answered with a 5-0 run, including two Vega kills and two Rakestraw stuffs, to make it 17-14. Up by three again at 19-16, the Anteaters closed out the set by scoring six of the final eight points.

Stanford came out of the break on fire, racing ahead 7-1 in Set 3 behind two Rakestraw blocks and two Beatty kills. A pair of Koubi kills and three blocks helped UCI to a tie at 10. Down 14-12, the Anteaters scored four straight, but the Cardinal answered with a 6-2 run of its own to make it 20-18. Stanford had the first set-point chance at 24-23, but UCI responded with a Herschko kill and a Stadick block to have a shot at the match. The Cardinal extended the match with a 3-0 run, capped by a Beatty ace.

UC Irvine took a 7-3 lead in Set 4, but Stanford soon caught up and went up 9-8 with help from two service aces and a block. Trailing 12-11, UCI scored seven straight including two Stadick blocks and two Hershko kills. Stanford chipped away cutting the margin to two at 23-21. A pair of Michael Saeta kills stopped the comeback short and sealed the Anteater win.

The win combined with a UCLA loss clinches a home match for the MPSF quarterfinals next Saturday (Apr. 15). UCI will be the No. 4 seed and host No. 5 seed UCLA at 7:00 p.m.

The Anteaters improve to 18-6 overall and 12-5 in the MPSF and extend their winning streak to seven in a row. Stanford goes to 12-12 on the year and 7-10 in league action.

UCI created some separation in the first set with Aaron Koubi at the service line, winning four straight to move to 11-7. The Cardinal would claw back in to the set to tie it at 16-16 then move in front 18-16 with the help of three UCI attack errors. The Anteaters rallied to lead 23-20 only to watch Stanford tie it again at 23-23. A kill by Michael Saeta off the reception was followed by a Tamir Hershko kill to give UCI the 32-30 victory.

An ace and kill by Thomas Hodges pushed UCI out to an 8-6 lead in the second set. Three Stanford errors and a kill by Scott Stadick helped expand the lead to 13-8 and another four in a row, the last an ace by Saeta, moved the margin to 17-9. The Anteaters would win the set 25-18 on a block by Stadick and Hershko.

Stanford jumped out to a 6-0 lead, but UCI rallied on a 5-1 run to keep it close 7-5. Back-to-back blocks edged UCI to 9-10 then ace by Karl Apfelbach knotted the set at 10-10. The teams would battle back and forth until Stanford scored the last three on a kill by Kevin Rakestraw, an Anteater attack error and an ace by Eric Beatty, 27-25.

In the fourth set, UCI went on a 7-0 run, using two Hershko kills, two stadick blocks and Saeta at the service line to open an 18-12 advantage. Leading 23-17, Stanford four unanswered to creep within 23-21, but a kill by Saeta stopped the momentum. Following a Cardinal kill, Saeta pounded the match-winner to give UCI the 25-22 set win and 3-1 match.

UCI recognized the 2007 NCAA Championship team during the match with several members and their families in attendance.

The Anteaters continue the celebrations tomorrow when UCI’s five seniors will be recognized following the match against Pepperdine. The match starts at 7:00 p.m. in the Bren Center.

After trailing 25-24 in the third set, Stanford reeled off three straight points to avoid the sweep. The run was capped off with an ace from freshman Eric Beatty.

The match was seemingly out of reach with the Cardinal down 18-12 in the fourth set. A 9-5 Stanford run cut the UC Irvine lead to 23-21. The Anteaters turned to its setter, Michael Saeta, who registered the final kills of the set for UCI, closing the door on the chances of a Cardinal comeback.

After moving to the right side last week, it was the second straight match Vega had reached the 20-kill plateau. Beatty added eight kills on .417 hitting in three sets played. Middle blocker Kevin Rakestraw totaled seven kills, five blocks and a season-high three aces. Three of Rakestraw’s blocks were solo, the most by a Cardinal player this season.

UC Irvine was led by Aaron Koubi and Tamir Hershko. Koubi tallied a double-double with 15 kills and 11 digs, while Hershko added 14 kills and six blocks. Saeta controlled the offense for the Anteaters with 51 assists to go with six kills, seven digs and three aces.

Stanford closes out the regular season on Saturday at UC San Diego. The Cardinal defeated the Tritons one week ago, a five-set thriller at Maples Pavilion.