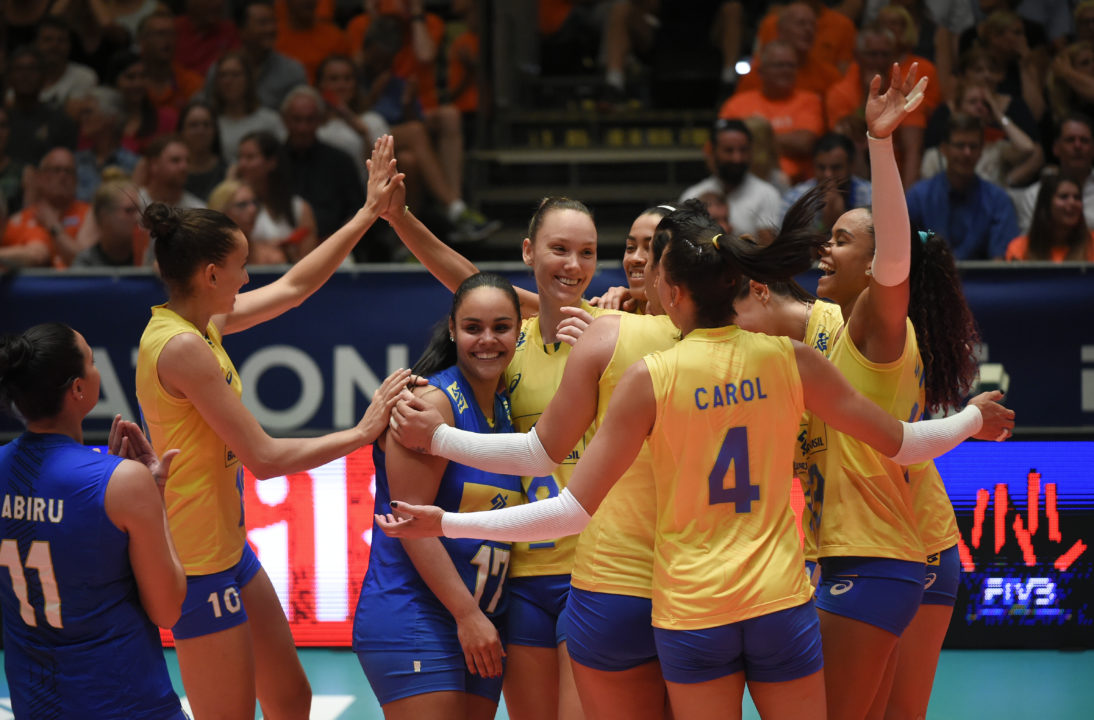 Poland earned its first win of Week 3 action, besting South Korea across the stat sheet in an easy sweep and snapping a four-match skid as Malwina Smarzek notched 19 points. Tandara Caixeta supplied more than enough firepower to lift Brazil past the Netherlands in four sets, although the Dutch outscored the visitors by five points.  Current Photo via FIVB

Poland earned its first win of Week 3 action, besting South Korea across the stat sheet in an easy sweep and snapping a four-match skid.

Malwina Smarzek kept her reign atop the VNL scoring leaderboard in tact with a 19-point effort in the match, tallying a match-high 15 kills, two blocks and two aces. Agnieszka Kakolewska followed with 13 points on six kills, a team-best six blocks and an ace, and Natalie Medrzyk added eight points (6 kills, 1 block, 1 ace). Marlena Plesnierowicz led the team from the service line with four aces.

Jaeyeong Lee and Jeongah Park paced Korea with 11 and 10 points respectively. Lee downed 11 kills, while Park added nine putaways and an ace. The next highest scorer was Heejin Kim with three points on a team-leading two blocks and an ace.

The Poles took an early 5-2 lead behind Kakolewska’s blocking and increased their lead to six at 13-7 on a Smarzek ace. From there, Poland cruised to a 25-11 win.

A Plesnierowicz ace helped Poland to an 8-3 advantage in Set 2. A Zuzanna Efemienko-Mlotkowska kill made it 14-8 and a plethora of Korean miscues eased the Polish side to a 25-15 win.

Korea led by two at the first technical timeout of Set 3, but the advantage was short-lived. Poland scored 12 of the next 13 points behind Plesnierowicz’s serve and Smarzek’s offense. The Koreans did not go quietly, however, thwarting the first four Polish match-point tries before Efemienko issued the final blow at 25-16.

Tandara Caixeta supplied more than enough firepower to lift Brazil past the Netherlands, although the Dutch outscored the visitors by five points.

Caixeta pounded down 26 kills and added a team-best three blocks and team-high two aces. Amanda Francisco was the lone other Brazilian in double digits with 10 points, including nine kills. Adenizia Da Silva (9) and Drussyla Costa (9) followed. DaSilva downed five kills and added three stuffs and an ace, while Costa chimed in with nine kills. Twelve of Brazil’s 14 players saw court time in the match as coach Jose Guimaraes looked for the winning combination.

Lonneka Sloetjes and Anne Buijs were the top scorers for the Netherlands, notching 19 apiece. Sloetjes tallied a team-leading 17 kills, a block and an ace, while Buijs chipped in 15 kills and a team-best four blocks. Maret Balkestein-Grothues also managed double-digit points with 11 on eight kills and a team-high three aces. Celeste Plak turned in five points, all on kills, as a substitute in three sets.

The Dutch outdid Brazil offensively with 59 kills to 56, and earned three more points on errors (18-15), while the Brazilians boasted a slight 10-9 advantage in blocks. Both teams served up seven aces.

Brazil trailed by as many five in Set 1, yet pushed through for the 25-23 victory. In Set 2, the Brazilians made it past a three-point deficit before winning in extra points at 26-24. The Dutch turned the tide in Set 3, but couldn’t maintain it in the final set, falling victim to the Brazilian block in a 25-22 loss.