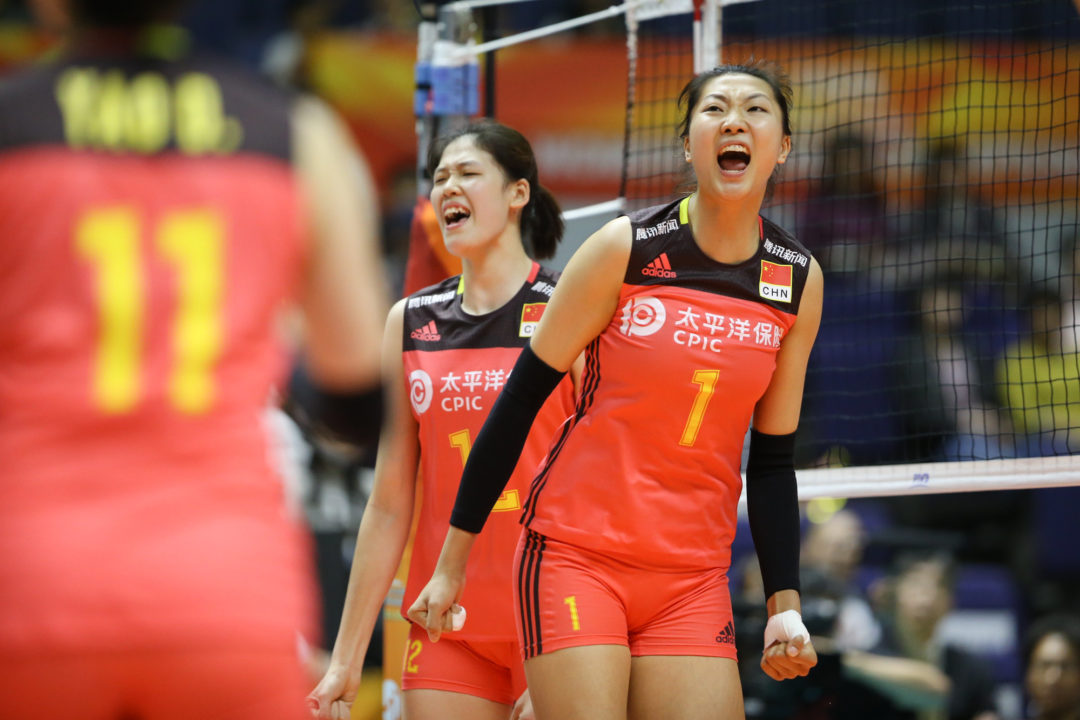 Xinyue Yuan (#1) led all players from all pools with 7 blocks on day 1 of the 2018 FIVB Women's Volleyball World Championships. Current Photo via FIVB

There are going to be a lot of brutal matches in Pool B of the 2018 FIVB Women’s Volleyball World Championships, when leaders Turkey, China, and Italy start to pound on each other as early as Sunday (Turkey vs. China). But the group started with a warmup match for each, and each took care of business in sound 3-0 thumpings of their day 1 opponents.

The biggest questions for China coming into this tournament revolved around two things: how and where they would use Li Yingying, and whether they had the quality at middle blocker to beat the best in the world.

We got some clarity on both positions on Saturday.

Xinyue Yuan led China with 16 points on 9 kills (64% hitting) and an all-matches best of 7 blocked shots out of the middle; while Li entered the match midway through the 2nd set at outside hitter, not opposite, and scored 8 points (6-for-15 hitting) in a set-and-a-half of play replacing Changning Zhang – who is in her first action back from a run of injuries this summer.

The other middle blocker position for China, occupied by Bi Yan, had only 3 kills and 0 blocks in the match.

China dominated the match at the net. They had 17 blocks, as compared to just 3 for the Cubans, and had only 5 errors of their own across 3 sets. Cuba was led by 13 from Diaris Perez Ramos, while Ailama Cese Montalvo had 12 – both hitting from the left side. Cuba actually played a 6-2 rortation, with 2 setters and no opposite, in the match.

Italy was all-systems go in their opening match of the tournament, with all 3 hitter positions scoring 12+ kills. Italy feels a bit like the American-mens-equivalent in this tournament, where they spent all summer experimenting with lineups and resting stars, but in go time, they have a starting 6 that can contend with anybody in the world.

That’s a group led  by teenager Paola Egonu, who led all players in the match with 17 points. She hit 13-for-28 (43%) and chipped in 4 blocks and an ace in the match. Italy had an 11-4 blocks advantage on the day, led by Egonu and supported by 3 from captain and middle blocker Cristina Chirichella. Myriam Sylla (14-for-24, 58%) had 16 points in the match. That’s after having been dropped from Italy’s roster for the final week of preliminary play at the Nations League earlier this summer, when they were ultimately eliminated.

Caterina Bosetti joined them in double figures with 13 (12-for-27 hitting, 1 block).

Bulgaria was led by 9 points from middle blocker Nasya Dimitrova, 8 points from Gergana Dimitrova (no relation), and 8 from Mariya Karakasheva in the match. They caught a little spark late when Miroslava Paskova (7-for-13) came in at opposite in the 2nd set in relief of Silvana Chausheva (2-for-10), which helped close the gap, but it wasn’t enough to steal even a set from the Italians.

Turkey, who is playing better this summer than their #12 World Ranking  (including a runner-up finish at the recent Nations League), swept Canada 3-0 on Saturday. The two teams played a series of friendlies in mid-August, with Turkey winning 2-of-3 of them.

One of the most experienced teams in the tournament, and also one of the best-serving teams, the Turks had an 11-3 advantage in aces in the matchup. That service run came even without the services of 21-year old Hande Baladin, who has a huge serve, can play anywhere along the front line, but spent Saturday’s match on the sideline.

Meryem Boz (13-for 23 hitting) and Eda Erdem (9-for-10 hitting, 4 aces) had 13 points each, while Seyma Ercan (8-for-14, 3 aces) led all players with 14. As a team, Turkey hit 57% in the match and held Canada to 37% hitting. The highlight for the VolleyMaples was a 12-point, 58% hitting day for Kiera Van Ryk, who was named the country’s top collegiate player after just her freshman season last year. That’s an encouraging World Championship debut for a 6’2″ outside hitter around whom Canada can build their future.

Alexa Gray had 9 for Canada (8-for-22 hitting), and recent Michigan State grad Autumn Bailey, who will start her pro career in Turkey after the World Championships, had 7 on just 6-for-21 hitting (29%).

Pool B Standings – After  September 29th