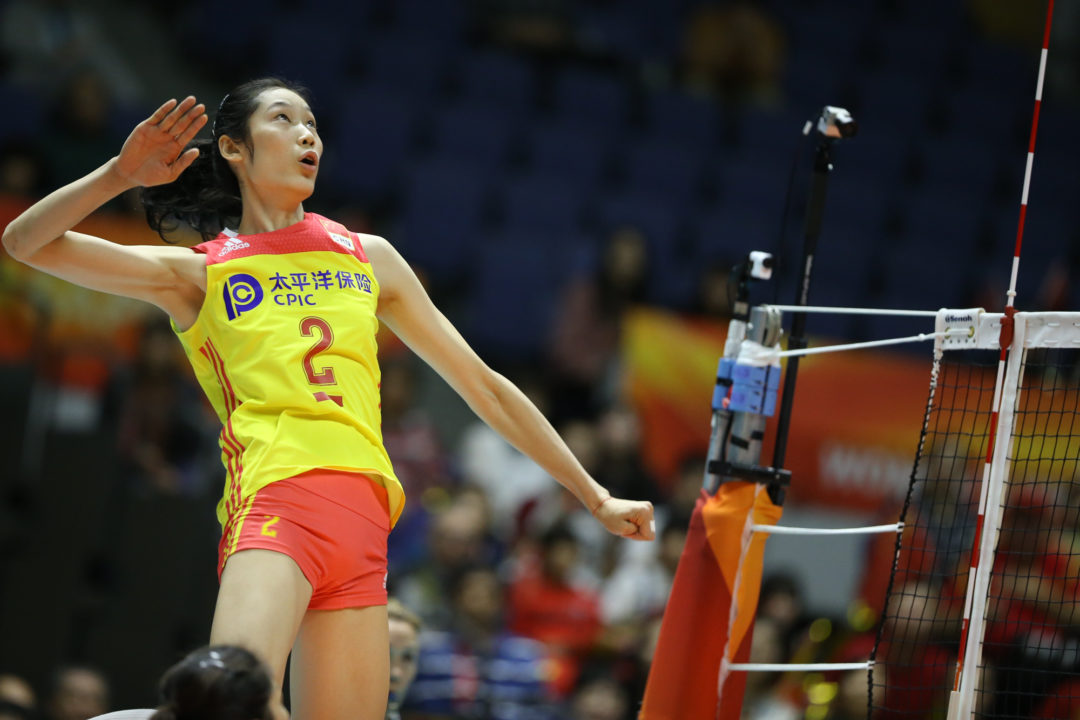 Zhu Ting led China to another 3-0 win, while Bulgaria and Italy also picked up sweeps. Current Photo via FIVB

The first big match of Pool B on Sunday, pitting the Olympic champions China against the Nations League silver medalists Turkey, wound up with a whimper. China swept that match 3-0, and with Italy and Bulgaria also registering 3-0 wins, each of the 6 matches in the pool so far have been sweeps.

The Chinese block was quieter on Sunday than they were in their opener on Saturday, with just 9 as compared to 17 a day earlier, but the outcome was the same: a 3-0 sweep of the Nations League runners-up Turkey.

China did have a little trouble in the serve-and-receipt game: they gave up 6 aces to Turkey, including 2 to their young expert server Hande Baladin (who didn’t play in Turkey’s opener). China had only 9 ‘excellent’ receptions in the match

Turkey did go on a little run in the 3rd set, after several substitutions. Ebrar Karakurt entered the game mid-way through the 2nd set and had 16 points (including 12 in the 3rd) to lead all Turkey players. She hit 15/24 (62.5%) in the match among 73 serves received for just a 12.3% excellent rate.

China, as mentioned, got less out of their middles than they did in their previous match, perhaps renewing concerns over that position. Zhu Ting led the team with 16 points on 15/29 hitting, and Xinyue Yuan had just 7 points and 2 blocks after a 16-point, 7 block outing to open the tournament.

Still, between her and Ni Yan, China got 14 points and 5 blocks total – which might be enough with how deep the team is at outside hitter.

Speaking of which, Changning Zhang went the distance at outside hitter in her 2nd match back from injuries that cost her all of the Nations League and Asian Gaames competitions. She hit 9-for-18 and added 3 blocks to a 12-point effort. That left dynamic teenager Li Yingying on the bench for the whole match after the two split time on Saturday.

After an off-day on Monday, China will play Canada and Turkey will play Bulgaria on Tuesday.

It was another big day for Italian teenage opposite Paola Egonu, as she scored 18 points in Italy’s 3-0 win over Canada. That now gives her 35 points in 6 sets of play in the tournament so far: 5.83/set. This was the two teams’ first-ever matchup in a world-level competition.

Italy has again stood by its starters en route to a comfortable win, playing the same 7 for the entire match: an even more-compact lineup than they had against Bulgaria, where 3 players saw a few points each as service or defensive specialists.

Canada got another big effort from the outside, with hitter Alexa Gray keeping the team in both sets 2 and 3 early. But, ultimately, the effort couldn’t be sustained, and Italy dominated the latter part of all 3 sets. Gray ended with 14 points on 45% hitting, while Kiera van Ryk, their game 1 leader, had just 8 on 28% hitting.

It was a physical Italian team and we couldn’t neutralise them in our play,” said Canadian captain Kyla Richey. “Alexa [Gray] stepped up for us as an offensive weapon and did solid for us but we need other players to step up into that role. Again, we couldn’t really settle into our game today so we still have some work to do going into the next three games.”

Bulgaria had another very-balanced offensive attack on Saturday, but this time the match came out in their favor. Gergana Dimitrova, Nasya Dimitrova, Miroslava Paskova, and Hristina Ruseva each had 11 points for the Bulgarians. That group also combined for 9 blocks and 7 aces as Bulgaria dominated all phases of the match and wrapped it in just over an hour (63 minutes).

The Bulgarians saw this as a confidence-building win after a 3-0 loss to Italy on Saturday. “I’m really proud today with this win by my team,” said captain Hristina Ruseva. “It was really important because yesterday we had a bad loss to Italy. Now we need to get our self-confidence back. I hope in our next game we will be able to concentrate like we did today.”

Cuban captain Diaris Perez had 11 points as well on 10/20 hitting, but the rest of the team hit under 33%. The Cubans could also only muster 2 blocks and 1 ace, while recording 22 errors (Bulgaria only gave away 7 points on errors).