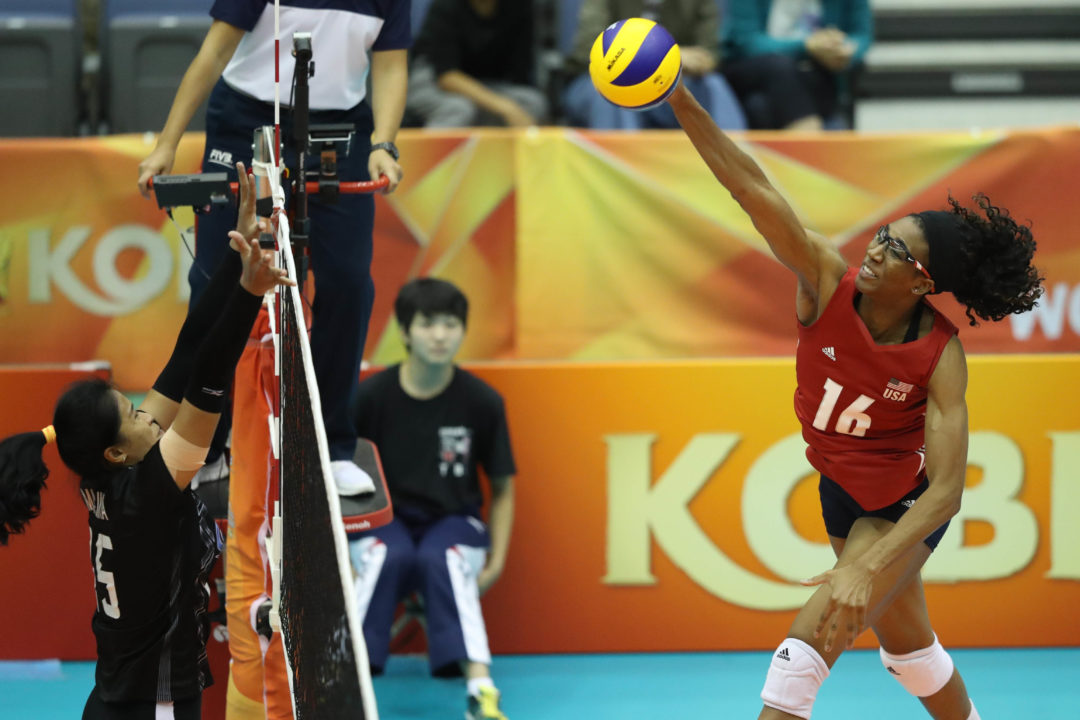 2nd-ranked United States squeaked by 16th-ranked Thailand, which was down a starter and lost its top scorer amidst the 4th set, in 5 to remain undefeated in Pool C play Wednesday.  Current Photo via FIVB

2nd-ranked United States squeaked by 16th-ranked Thailand, which was down a starter and lost its top scorer amidst the 4th set, in 5 to remain undefeated in Pool C play Wednesday. 24th-ranked Azerbaijan qualified for the 2nd round with a victory over 34th-ranked Trinadad and Tobago in straight sets, while 5th-ranked Russia stayed undefeated with a 3-0 win over 10th-ranked South Korea.

2nd-ranked United States survived 16th-ranked Thailand in a 5-set thriller Wednesday night to remain atop Pool C standings along with 5th-ranked Russia. The Americans held the edge on the block (17 to 4) and at the service line (8 to 2), which proved to be the difference makers in the victory.

“I thought we came out really strong to start the match,” USA team captain Jordan Larson said. “Obviously, Thailand is a very strong team, so we were expecting them to come at us hard and they did in the third and fourth sets and definitely in the fifth, so I am really proud of our team for coming out with a win. There are still lots of chances to get better.”

Spiker Kongyot Ajcharaporn was unable to start the 5th set for Thailand after slipping toward the end of the 4th set. She was taken to the hospital following the match for an ankle injury evaluation.

“We knew the United States would be a very strong team with a quick playing style,” Thai head coach Danai Sriwachamaytakul said. “Against a strong serve we could not receive so well in the beginning but then our play improved, and I want to thank all members of the team for their performance. Our No. 18 (Ajcharaporn) will go to hospital to check her (ankle) injury, but the doctor thinks it is not too serious.”

Thailand was not at full strength for the match from the beginning, as opposite hitter Pimpichaya Kokram sat out after sustaining a right knee injury yesterday in the 3rd set against 34th-ranked Trinadad and Tobago.

Despite her injury, Ajcharaporn led the Thai with 23 points followed by Thinkaow Pleumjit, who posted 14 points.

An extended victory in the opening set, spurred 24th-ranked Azerbaijan on to a victory in straight sets over 34th-ranked Trinadad and Tobago on Wednesday inside Kobe Green Arena. With the win, Azerbaijan reached its goal of second round qualification with a 2-2 mark.

“We are very satisfied with this result because it means we have reached our goal,” Azerbaijan team captain Odina Aliyeva said.

On the verge of a win in the opening set, Trinadad and Tobago missed 4 set points before Azerbaijan could recover with 2-straight scores. Azerbaijan carried the momentum earned an exciting first set into the rest of the match to complete the sweep.

Polina Rahimova registered a team-high 27 points for Azerbaijan, followed by Jana Kulan, who contributed 15 points in the win.

Trinadad and Tobago was led by Sinead Jack and Channon Thompson, who notched 18 and 14 points, respectively in the 3-set match.

“I am proud of all the team members today because everyone played their part,” Russia head coach Vadim Pankov said. “The Korean reception was very good and this is why it was difficult to win this match. We have to keep this momentum and this positive feeling when we play the United States tomorrow.”

Nataliya Goncharova was unstoppable in the match, notching 24 points and 22 kills for Russia. Kseniia Parubets also added 10 points, while Irina Koroleva tallied 4 blocks in the win.