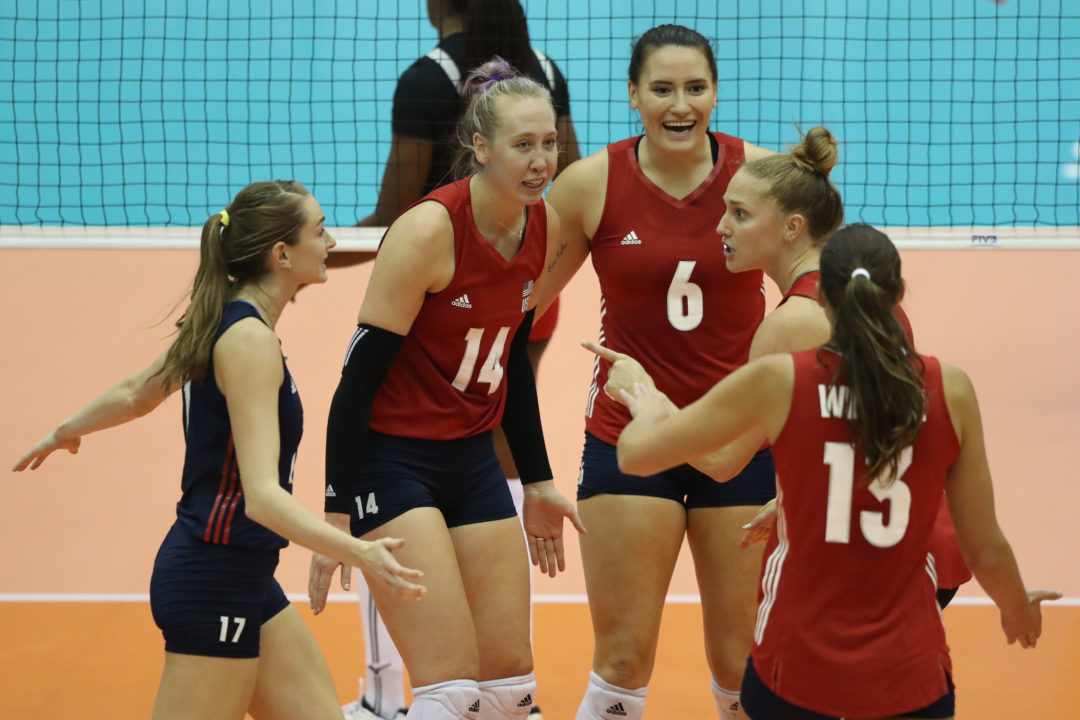 With Nations League MVP Michelle Bartsch-Hackley back in the starting lineup, USA Volleyball made quick work of Trinadad and Tobago in straight sets Saturday to move to 2-0 in Pool C at the 2018 FIVB Women’s Volleyball World Championships.

The Americans were dominant in every way, holding an advantage in attack percentage (.469 to .100), blocks (11 to 3) and service aces (13 to 0). Trinadad and Tobego, which is appearing in its first World Championship, struggled with execution, committing 17 errors to fall to 0-2 in Pool C action.

“Our team did a very nice job of taking care of our side of the net and not worrying about the other team, and executing our game plan,” U.S. Women’s National Team Head Coach Karch Kiraly said. “We were serving very tough and I like how everybody has been able to contribute so much early in this tournament.”

Outside Bartsch-Hackley led the USA with 10 kills, 3 blocks and 2 service aces, while middle Tetori Dixon contributed 13 kills, 4 blocks and 5 service aces. Channon Thompson notched 8 kills for Triniadad and Tobego in the loss.

Azerbaijan evened its Pool C record, 1-1, with a victory in 4 sets over South Korea, which falls to 0-2, in Kobe Green Arena Saturday night. An 8 to 4 blocking advantage, 9 service aces and a kicked up pace keyed the win.

“We improved a lot compared to yesterday’s game (against USA) and cut out a lot of the mistakes,” Azerbaijan captain Odina Aliyeva said. “We made a game plan and were able to respond with some quick play. This led to our win.”

Azerbaijan 🇦🇿 joined the list of Sunday winners in Kobe after a well-earned 3-1 victory over Korea 🇰🇷 @KOR_Volleyball, one that boosts their hopes of moving forward at #FIVBWomensWCH. Take a look at the highlights!

After finding itself on the verge of a major upset, Russia rallied back from an 0-2 deficit to survive Thailand in 5 sets at the 2018 FIVB World Championships. The Russians were led to victory by Nataliya Goncharova, who contributed 27 kills, and Irina Koroleva, who notched 7 blocks.

Unforced errors kept Russia off-balance early, and nearly caused their demise. However, the Russians’ ability to make serve-receive adjustments and get used to Thailand’s quick pace of play spurred the comeback charge.

“We allowed Thailand to play very quick volleyball at the start of the match,” Russia captain Evgeniya Startseva said. “In the third set we adjusted to this quick movement and our serve became stronger so we were able to respond.”

With the win, Russia remains undefeated 2-0 along with the USA. Thailand drops to 1-1 and is tied with Azerbaijan in Pool C standings.