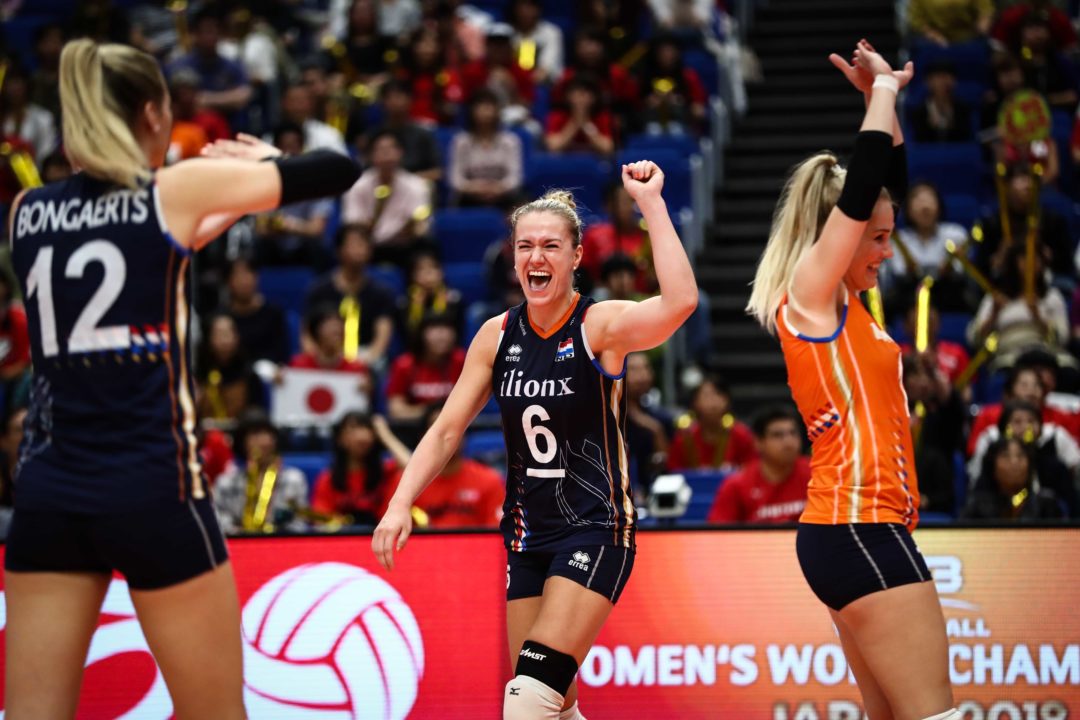 Maret Balkestein-Grothues led Netherlands to a 3-2 win over Japan on Sunday, giving them the Pool A lead. Current Photo via FIVB

While the elimination of teams like France before the Final 6 round of men’s volleyball shows how big parity is there, the women’s tournament has been far less exciting so far. Aside from a couple of matches through 2 days, it’s been ‘sweep city’ in the preliminary rounds, with countries separated by only a few spots in the World Rankings having lopsided outcomes.

Pool D, for example, has had 6 sweeps in 6 matches. Pool B can make the same claim. (More on these numbers in a separate article).

Things appear ready to pick up as we get back into the work week, though. Only Pools A and D will play on Monday, which includes a huge match between world #4 Brazil and world #3 Serbia.

Most groups seem to have been set up to a crescendo, rather than ‘opening-with-a-bang.’ Crowds have responded in kind, with low tournouts for many matches, including fewer for host Japan’s 2nd on Sunday than their 1st a day earlier. A typhoon raging outside contributed to low attendances as well, including just 350 in the last match of Pool D.

This was a roller-coaster match for the Dutch. The sets they won were by the minimum 2 points. The sets they lost weren’t even close. Japan actually outscored them 114-105.

But, on the strength of 20 points from the tournament’s leading scorer, Lonneke Sloetjes, the Dutch had enough in the end to overcome the host nation.

Having already played Germany, that is probably the Netherlands’ last test of the preliminary tournament. They’ll now be able to coast through Pool A to a perfect record, giving them both the opportunity for rest, building experience, and a perfect record as they approach round 2 of the tournament – with wins carrying forward from this preliminary set.

Russia’s Irina Koroleva had 10 kills and 7 blocks as the team fought-off a hot Thailand squad in 5 sets in Pool C. She hit 63% in the match, and with partner Irina Fesitova (6 blocks) led a big 15-block run at the net for the Russians.

Russia went down 2-0 to Thailand, who was still playing without injured teenage star Chatchu-on Moksri, but Russia used their block for an annihilation in the 3rd set (25-13), and they rolled downhill to the win from there.

After 2 days, there’s not much room left for unpredictability in Pool A. The Dutch will probably win, and be followed by Japan and Germany. The only thing left in the air is whether Mexico (Japan, Germany, Netherlands) or Cameroon (Netherlands, Japan, Argentina) can pick up either another win, or enough tie-breaking efforts, to take the 4th spot. Based on schedule, Cameroon has the bigger opportunity with winless Argentina remaining.

China broke the 3-way tie atop the pool by sweeping Turkey 3-0. That leaves just Italy and China perfect, but we’ll have to wait until Thursday for that matchup. Bulgaria looked good against Cuba and have a lot of weapons – Turkey will have to be on upset alert when Pool B play resumes on Tuesday. They might need an upset over Italy on Wednesday to give themselves a realistic shot at the Final 6, since preliminary records roll forward.

With secret weapon Sarah Wilhite turning into a service machine, the Americans were predictably dominant in a win over T&T, even using their 2nd string. Russia, on the other hand, looked shakier in a 3-2 win against Thailand. Thailand went up 2-0 on Russia early, though, and one can’t help but think what would’ve happened with a healthy Chatchu-on Moksri on the court. The US will play them on Wednesday, giving her an extra few days of rest. The Americans can’t fall into a trap in that match, especially if she returns.

Serbia and Brazil took care of business as the top two teams (and it’s not that close) in Pool D. They’ll play on Monday for the tie-breaker to win the pool. Don’t sleep on the DR at 0-2 though; they’re the only team that has had to play both Brazil and Serbia already, so they’ll hope to go on a run this week and climb back to 3rd in the pool.