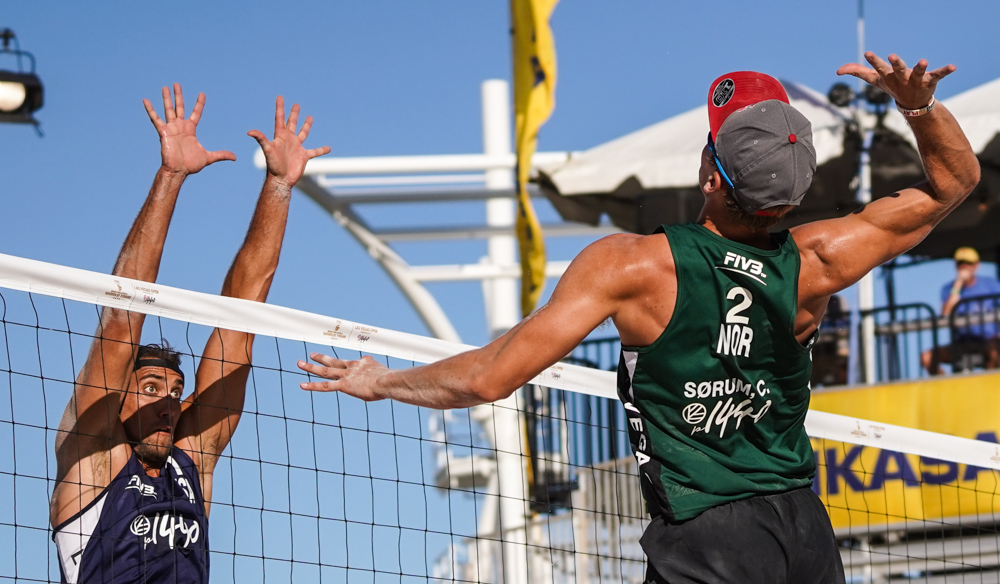 Poland's Grzegorz Fijalek/Michal Bryl, which were runnerup to Norwegians Anders Mol/Christian Sorum at the World Tour Finals and at the Vienna Major will have a third shot at the team in the Las Vegas Open Final on Sunday. Current Photo via FIVB

Mol/Sorum have won each of the last three FIVB events they have entered along with the title at the 2018 CEV European Championships, piling up $250,000 in prize money over the four events: including the Gstaad and Vienna Majors and the World Tour Finals.

All told, the duo has won five World Tour medals in 2018, including a silver at the Itapema Four Star in May.

Poland’s Grzegorz Fijalek/Michal Bryl across the net in Sunday’s final. The pair finished runnerup to the Norwegians at the World Tour Finals and at the Vienna Major (Aug. 5).

Crabb/Bourne are the host nation’s last hope of a medal at the event. The duo will vie for third place against Krasilnikov/Stoyanovskiy.

Crabb/Bourne are coming off a title win at the Qinzhou Three Star (Oct. 4), which marked Bourne’s first FIVB action since Sept. 18, 2016. Krasilnikov/Stoyanovskiy earned a silver medal at the Yangzhou Four Star last Sunday, in their first FIVB event together.