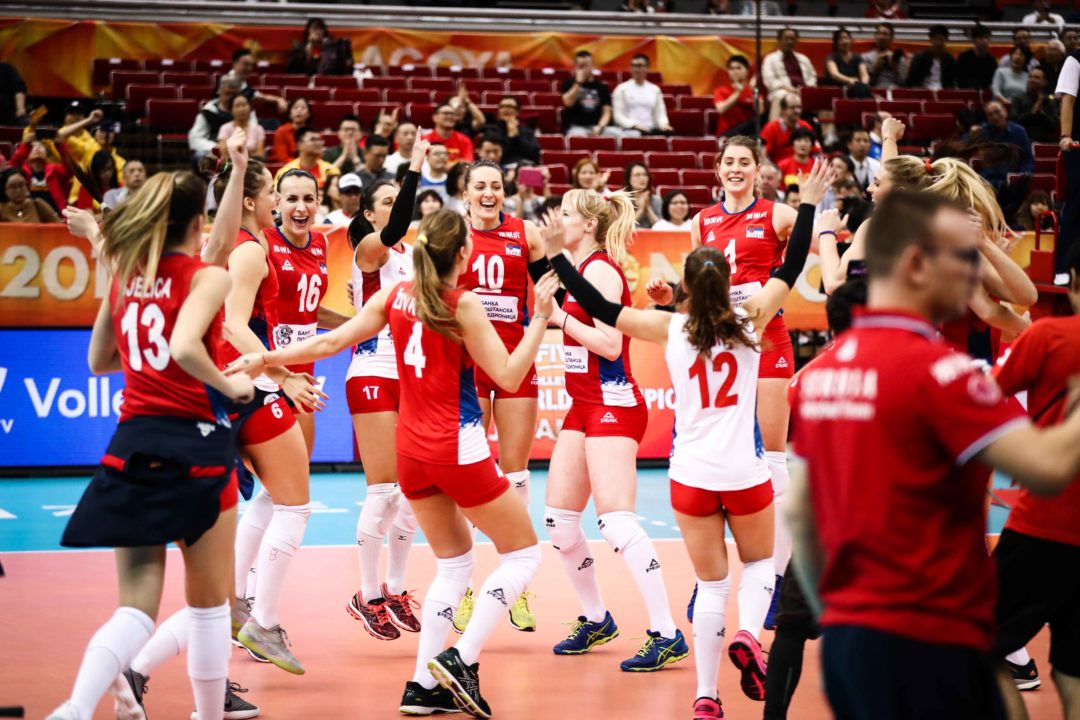 Serbia's Tijana Boskovic turned in 29 points (27 kills, 2 blocks), while Italy's Paola Egonu notched 28 as the Serbians issued Italy its first loss of the World Championships heading into the semifinals.  Current Photo via FIVB

Both teams already had claimed a spot in the semifinals based on Monday’s results, but Serbia handed Italy its first loss of the World Championships on Tuesday, snapping a 10-match streak.

“We have already qualified for the semifinals; we tried to do our best today with motivation,” Serbian coach Zoran Terzic said. “We didn’t play well in the last two matches of the second round after qualifying for the third round. We needed this game to play good again against a strong opponent in difficult situations. We must go on and play well in the semifinals.”

Two of the top scorers of the competition went head to head in Italy’s Paola Egonu and Serbia’s Tijana Boskovic and both delivered marquee performances. Boskovic turned in 29 points (27 kills, 2 blocks), while Egonu notched 28 (22 kills, 4 blocks, 2 aces), but Serbia edged out the Italians in overall kills (60-50) to pick up the win.

Italy served up more aces (8-4) but that was balanced by four extra points for the Serbians on miscues (20-16). Both teams put up 14 blocks.

For Italy, Elena Pietrini (15) and Crisitina Chirichella (10) joined Egonu in double-digit scoring, while Anna Danesi chimed in with nine points. Pietrini downed 13 kills and served up two aces, while Chirichella and Danesi managed a team-best four blocks apiece beside Egonu.

Serbia grabbed the early 6-4 lead in Set 1, but Italy rallied to tie it up at 12 en route to a 16-14 advantage. Serbia regained control and earned a set-point try at 24-21. Danesi served up an ace to keep the set going, but a Serbian timeout iced the server to claim the 25-21 win.

Set 2 was more of the same as Serbia built a slight lead at 8-6 onto to see Italy tie it up at 10, but it was nearly all Serbia from there as the team built an eight-point advantage at 23-15 capped by an Onjenovic ace. Rasic gave the Serbs the 2-0 lead with a kill at 25-19.

After the intermission, Italy seemed to wake up. The team went up 7-5 on a Pietrini ace and increased the lead to four at 20-16 on a Boskovic mishit. Serbia scored three in a row to extend the set, but Egonu claimed Italy the victory at 25-23 with her eighth point of the stanza.

Trailing 7-5 in Set 4, Italy scored three in a row to take the lead. Serbia was back on top at 11-10, only to see the Italians score six of the next nine to go up 16-14 at the second technical timeout. Mihajlovic tied it up at 17 and Rasic notched two stuffs to give Serbia the 19-17 edge. Boskovic kicked into gear down the stretch, adding a block and the match-ending termination.

“They (Serbia) played physically strong today,” Italian coach David Mazzanti said. “Their defense gave us trouble. We could not play our volleyball. We lack aggressiveness. We can still improve.”

The victory gives Serbia the top spot in the semifinals coming out of Pool G. The Serbs will face the Netherlands on Friday in the first semifinal match. Italy will face off with China.