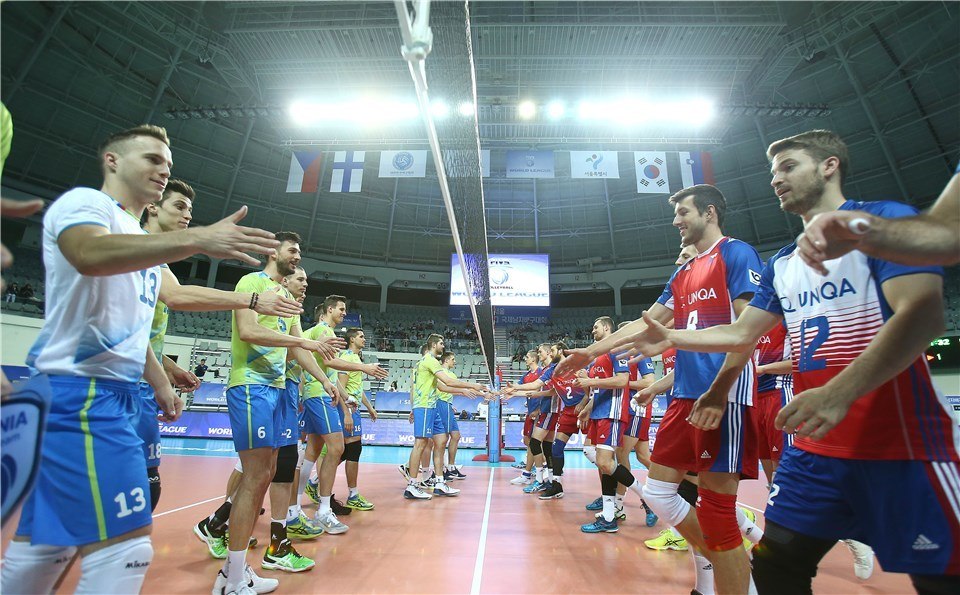 Slovenia remained undefeated in Pool A2 play with a 3-1 rout of the Czech Republic, moving to 9 points and a tie for the top spot in Group 2. Current Photo via FIVB

Slovenia remained undefeated in Pool A2 play with a 3-1 rout of the Czech Republic, moving to 9 points and a tie for the top spot in Group 2. Slovenia is currently tied with Slovakia, which plays in Pool B2.

Alen Sket raked in 21 points and Klemen Cebulj 15, outscoring everyone on the Czech side to lead a 3-1 win for Slovenia. Slovenia played 10 different men and had four score in the double digits.

The Czech Republic was outspiked by a massive 60-38 margin, but did lead with 12 total blocks to Slovenia’s 6. 5 of those blocks came from Michal Finger, who also had a team-high 13 points. Petr Michalek had 12 himself.

The loss drops the Czech Republic behind Korea in total record, but the two teams still remain tied at 4 points apiece.

Korea earned its second win in as many days, knocking off Finland in a brutal five-setter. Finland went up 1-0 on a hard-fought first set, but Korea fought back to take two more sets before Finland evened things up. The third set came down to just two points as Korea triumphed 15-13.

Joo-Hyeong Park had a game-high 24 points for Korea, with Kang-Won Lee scoring 17. A deep Korean roster wound up using freshness to outlast Finland – 12 different Koreans got on the floor, compared to just 8 Finnish players.

Jan Helenius had 20 points to lead Finland, getting 3 of them on blocks. Finland outblocked Korea 12-7, but struggled to get digs, losing that stat 8-22.