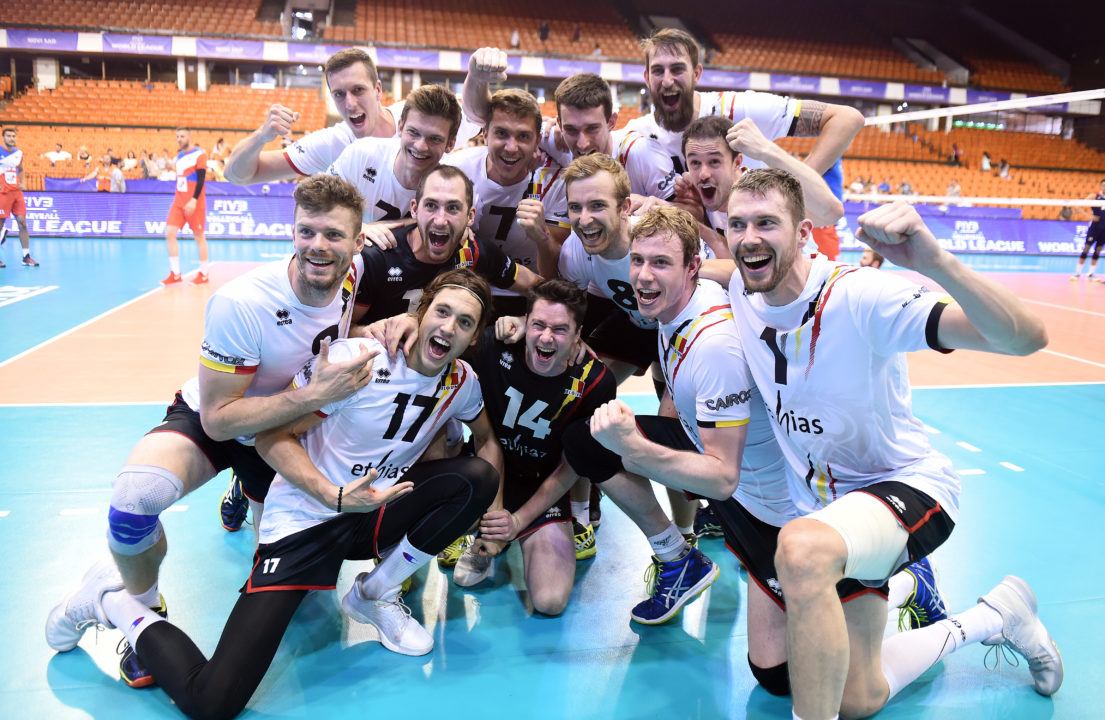 A 3-1 win by Belgium vaulted them up to 2nd in the Group 1 standings, while the Americans earned just 1 point in the first weekend of action. Current Photo via FIVB

In last year’s World League, it took 19 points from 9 games to make the final 6. If the Americans swept their remaining 6 matches, that would get them to the same 19 points, but that’s an unlikely scenario. For all intents-and-purposes, the Americans’ focus for the next two weeks now turns to cementing their future by testing out young talent on the international stage.

Another big day from Belgium’s big rightside/leftside combo of Bram van den Dries and Sam Deroo had 20 and 18 points, respectively, to carry the Belgian offense for the 3rd-straight game. Their 7 points was the most won in the pool and leaves them 2nd behind France in the overall Group 1 table.

Deroo had 14 kills and only 1 error to go with 3 blocks – resulting in a 56% success rate and whopping .520 hitting efficiency.

As a team, Belgium landed 46% of their shots, which was actually lower than the Americans’ 50% success rate, but the Americans had 20 hitting errors as compared to just 13 for Belgium.

Team USA continued to rattle their lineup. This time, veteran Micah Christenson spent most of the game on the bench, making substitution appearances in just two sets, as team captain Kawika Shoji got the start.

Garrett Muagututia continued to see more action at outside hitter, though he only got 3 kills, while for the second-straight day Ben Patch got most of the team’s run at opposite.

Patch scored another 21 points in 4 sets on Sunday, with 17 kills and 4 blocks. As Team USA seeks depth at the opposite position, Patch’s back-to-back starts imply that head coach John Speraw likes what he sees from the recent graduate of BYU. It was another boom-or-bust performance from Patch though: he had 17 kills on 34 swings, but also had 9 hitting errors and 5 service errors, building off 6 and 5, respectively, on Saturday.

The defending World League champions from Serbia recovered from a surprising 3-0 sweep at the hands of Belgium on Saturday to pick up the maximum 3 points on Sunday.

On Saturday, Serbia’s block struggled with only 4 stuffs on 33 block attempts, whereas that number grew to 10 in Sunday’s rematch – on a much-more-active 55 attempts (even if 30 of those attempts resulted in Canadian points).

Serbia was successful on 51.1% of their shots, led by a rebound game from 2016 MVP Marko Ivovic. Ivovic started only 1 set through his team’s first 2 games, but on Sunday he started all 4 and led Serbia with 16 points. He recorded 13 kills with just 3 errors on 21 swings – a 61.9% success rate and a whopping .476 hitting efficiency. He also had a block and 2 aces for Serbia, who as a team had more of the former (9) than the latter (8).

Canada had 3 players crack the 15-point barrier in the match. Stephen Maar led the way with 16, marking his second-straight game in double figures. High-flying 18-year old Sharone Vernon-Evans had a career-high of 15 in just his 9th international cap, which was matched by 15 from Gordon Perrin.