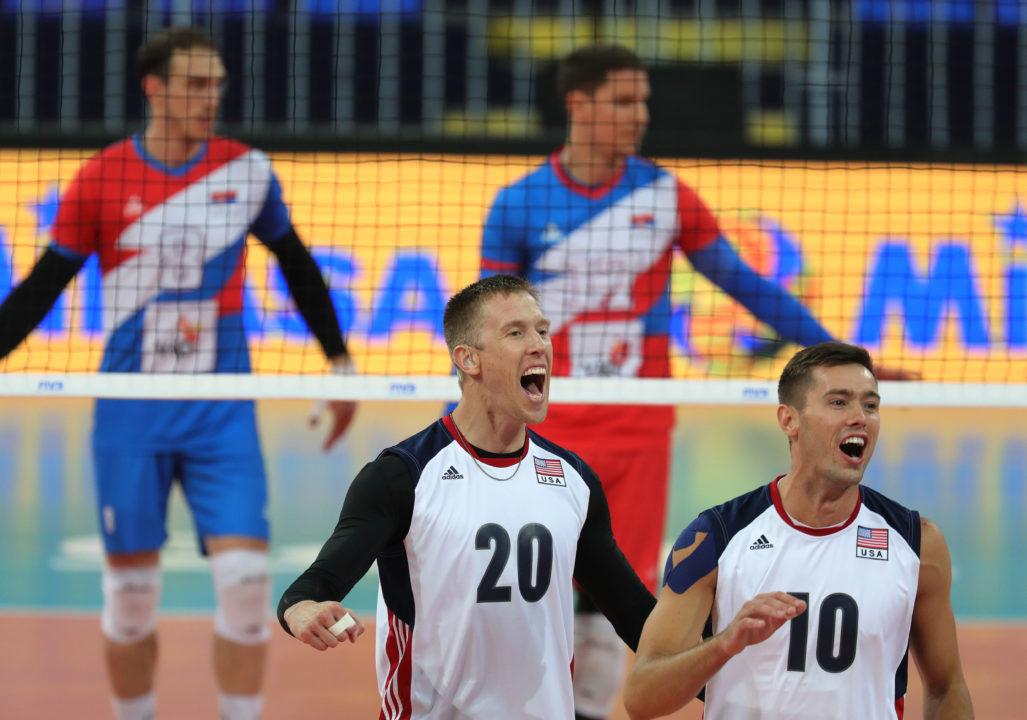 Day two of the FIVB World League Final Six has concluded with Canada and the USA both upsetting their opponents. With their wins, both teams have secured their spot in the semifinals that will take place on July 7. Current Photo via FIVB

Day two of the FIVB World League Final Six has concluded with Canada and the USA both upsetting their opponents. With their wins, both teams have secured their spot in the semifinals that will take place on July 7.

Canada ran straight through Russia in a three-set sweep that will send the Canadian crew straight to the semifinals. Canada used strong attacks to take down the tough Russian squad, with a 43-33 attack advantage in the match.

The win gives Canada them their highest-ever finish in the World League. Their previous best was a fifth-place finish in Mar del Plata in 2013. In that World League, the Canadian also took down Russia in a tough match. They ended with a 1-1 record but were booted from the semifinals due on tiebreakers.

“We’re very satisfied for this qualification and also because even though it wasn’t our best game, we made fewer mistakes than yesterday and played good volleyball overall. We have to prevail on two very hard sets and we could take advantage of that position from that point. We are aware also that this result leaves us on a very comfortable place for what’s ahead, so we’re very happy,” said Canada’s head coach Stephane Antiga

The star of the show was up-and-comer Sharone Vernon-Evans, who has the second-highest spike-hit height of 12’6.5″ in the world. Vernon-Evans’ 14 points led the Canadian crew to victory on 12 kills, one block and one ace. Up until this match, Vernon-Evans has been present but not a true force for the Canadian crew.

As back-up, Vernon-Evans had John Gordon Perrin and Stephen Timothy Maar who also contributed 12 points apiece in the win.

Russia did not play up to their normal expected standard against the Canadian team and the team’s head coach Sergey Shliapnikov saw that.

“We played the first two sets on a leveled basis against Canada, and we could have won any one of them or maybe both. Unfortunately, we didn’t and in the third set we lost our focus and couldn’t be up to the level anyone would expect from Russia,” said Shliapnikov.

Leading Russia in the defeat was Egor Kliuka with 11 points, all on kills.

The United States fought their way past the defending World League champions in a four-set match against Serbia. Using a strong attack against the Serbians helped the Americans to the victory, despite having 30 errors in the match to Serbia’s 23.

In the first two sets of the match, the Americans were able to take a lead over the Serbian crew and find a way to the end. The third set got away from the American crew, as the Serbian’s decided to wake up and found a way to better every ball they touched. The fourth set began much like the third set, with Serbia grabbing an early lead and taking a decent enough lead over Team USA. However, after leading 16-14 going into the second technical timeout of the match, Team USA stepped up to go on a 7-2 run that gave them a 21-18 lead. After a few Serbian errors and a Taylor Sander ace, the Americans were able to pull out the four-set win.

“It’s always interesting to see how your team is going to respond after you have a disappointing loss like the one yesterday, so I’m most pleased with how we can onto the match, how we won the first two sets and how we hold on when Serbia had a nice run. Third set they served really well and they were ahead in the fourth, so I’m really proud of the guys for how they responded there. Serbia is a great team, so this is a great win for us and for this team to be in the semifinals is amazing,” said USA’s head coach John Speraw.

Unlike in day one, Ben Patch was not the most dominant scorer for the American crew, but Sander stepped up to take the leading role in the victory. In the match, Sander put down 22 points, with 18 kills, one block and three aces. Team USA put down five aces in the match, which is uncharacteristic of the team, as they have struggled tremendously from the service line. Thomas Jaeschke took but a leading role for the Americans, as well, stepping up in crucial moments to put down 14 points. Patch contributed another 11 points in the win.

After being a solid force for the Americans throughout the tournament and in the loss to France yesterday, Jeff Jendryk did not see the floor after the first set, putting down just three points.

For Serbia, Aleksandar Atanasijevic earned himself a starting position with the Serbian crew after being a substitute in the first set, ending with 18 points. Srecko Lisinac added another 15 points for the Serbians in the loss.