Standings After Day 2 of the 2018 W. Volleyball Nations League 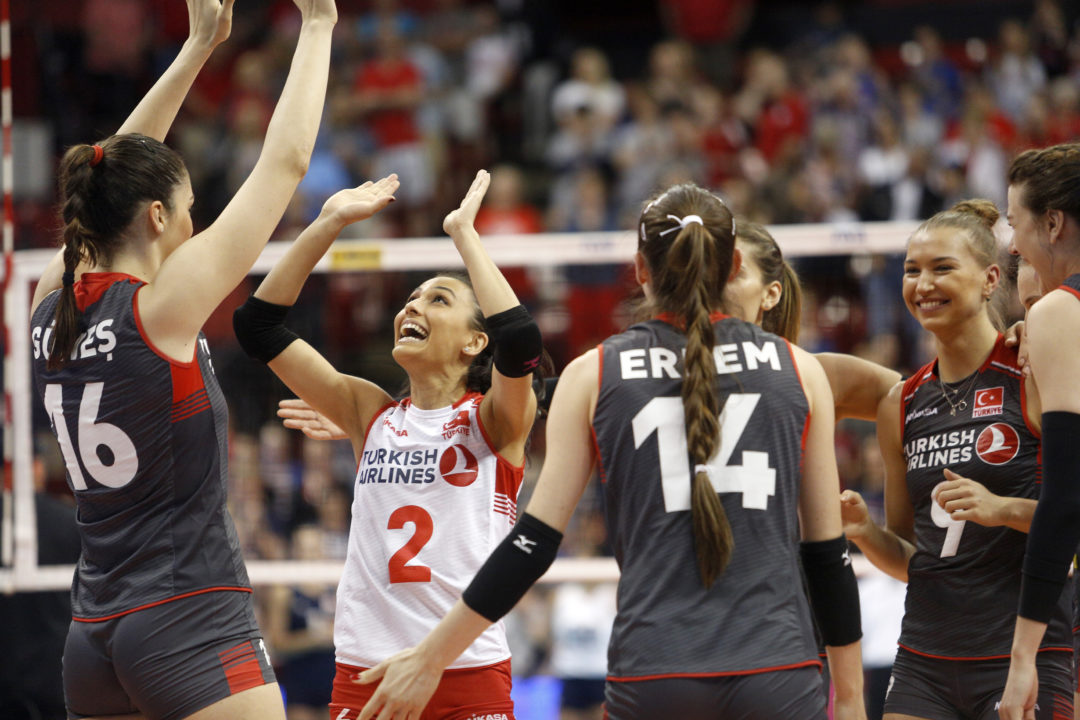 Turkey had the upset of the day on Wednesday, beating the United States 3-2. Current Photo via FIVB

After a few upsets on day 1, day 2 of the 2018 FIVB Women’s Volleyball Nations League went almost to chalk in the final results – with one major exception. In the final match of the day, the Turkish women, who have been the revelation early, upset the United States (in front of a home crowd) 16-14. With a long tournament ahead, American head coach Karch Kiraly tried to let his starting, less-experienced lineup work things out. But the time he subbed in Jordan Larson late in the 2nd set, it was too little, too late, and the Americans lost their first match, while Turkey jumped into the top 5 and a qualifying position. 8 blocks, 7 kills, and 1 ace from Zehra Gunes might be the performance of the day.

Otherwise the results were about what was expected from the day.

After shocking last year’s World Grand Prix champions Brazil on Tuesday, Germany was humbled by Serbia in a 3-0 sweep on Wednesday. Italy, last year’s Grand Prix runners-up, dropped a second straight match with their young team (that only has 2 of the 14 players from last year’s Final 6 roster).

China, playing without Zhu Ting, has found a powerful new opposite in Lingling Yi, who had double-digit scoring for her second-straight match (which is the entirety of her senior international career). Still, in the weakest of the week 1 pools, and without their superstar, we’ll learn much more about them on May 24th when they play Serbia in Macau: which should be their first real test of the tournament.

Argentina continues to give teams fits, though in two days they’ve not come up with any points in 3-1 losses to Russia and the Netherlands.

The biggest matches on Thursday to finish the round will be Russia versus the Netherlands in Yekaterinburg (pool 1); and then both matches in pool 4 with Brazil vs. Serbia and Germany vs. Japan – both crucial matches for positioning coming out of the first week of play.

* – Challenger teams, the last ranked of which will have to play a special relegation series to qualify for the 2019 tournament.