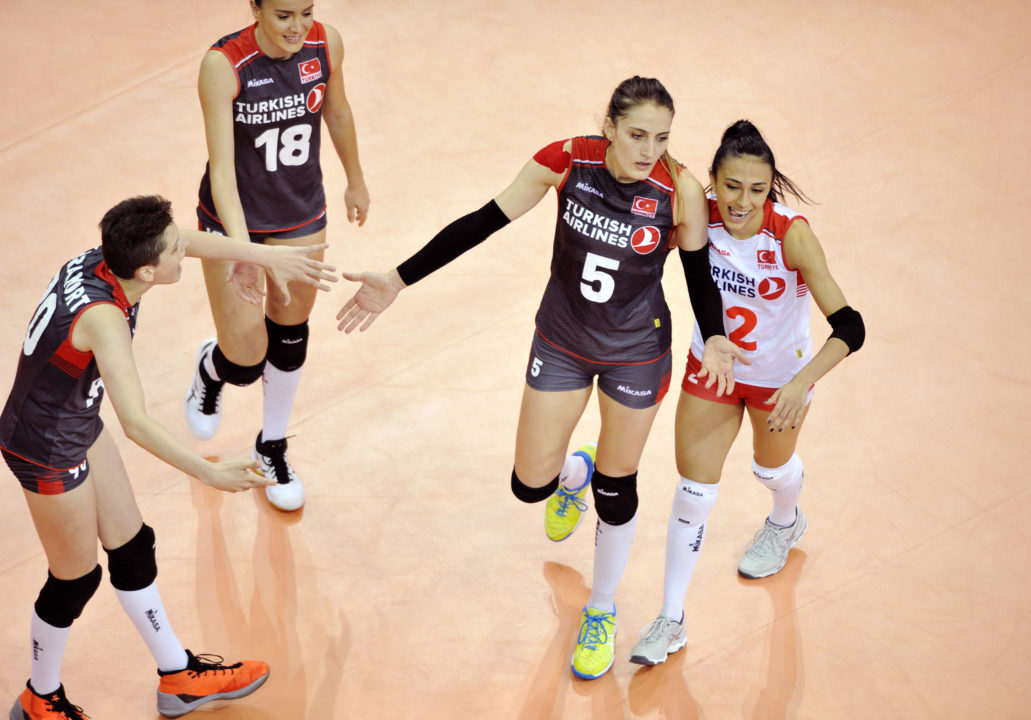 Turkey outdid the United States across the statsheet, besting the Americans in kills (62-60), blocks (20-17) and aces (8-5), although the USA did rally back from down 2-0 to force a fifth set, before falling in tiebreak.  Current Photo via FIVB

The tiebreak was tied at 7-all before Turkey scored five of the next six, two on Ercan putaways, to go ahead 12-8 and force a USA timeout. A review on a touch call was overturned, giving Boz a kill and putting Turkey just two points away at 13-9. Putdowns by Gibbemeyer and Bartsch-Hackley kept the Americans within striking distance at 13-11, but a Gunes kill put Turkey on the hill at 14-11. Two kills and a Turkish error each thwarted each match-point try, keeping USA in the game and tying the score at 14-all. A hitting error by Hill and a stuff block by Edrem Dundar and Gamze Alikaya capped the Turkish upset at 16-14.

Turkey boasted a slight 16-14 advantage in Set 1. The United States grabbed the lead at 17-16 and again at 20-19 forcing a Turkish timeout. Annie Drews put USA up 22-20, but it was not enough as Turkey rallied to tie at 23-all and rejected three American set-point tries before earning one of its own at 27-26. A hitting error by Kelsey Robinson sealed the 28-26 Turkish win.

The United States made some lineup shifts late in Set 2 and continued to tinker with the lineup in Set 3, inserting Murphy and Larson back into the starting rotation. The change worked and the Americans put together a 9-0 run to turn an 8-all tie into a dominating 17-8 advantage. The set was far from over, however, as Turkey battled back with 10 of the next 13 points to narrow the gap to one at 20-19. A pair of Turkish miscues and two USA kills put the home team on the hill to extend the match at 24-19. Another hitting error by Turkey breathed new life into the United States with a 25-20 win.

The USA boasted a 18-13 advantage late in Set 4, but again Turkey came charging back, knotting it up at 20-all, en route to a 22-21 advantage of its own. Turkey earned the first set point try at 24-23, but a putaway by Hill evened the score and a Turkish error gave the Americans a try. Bartsch-Hackley, a late sub, came through with a huge stuff to send the match to tiebreak with a 26-24 win.

Here are the postgame reactions:

United States coach Karch Kiraly: “Turkey is a really good team. We are a good team and those kinds of battles are going to happen a lot. This was only match 2… I really like the way our team responded down 2-0 and came storming back. We even had a swing to go up 15-14,  didn’t quite put it down to the floor, but Turkey played some really good volleyball. We are thankful because teams are going to bring a lot of good at us and it is only going to make us better in the long run.”

United States outside hitter Michelle Bartsch-Hackley:
“From the bench it just looked a little disconnected, but I think still that is really normal for us, because its still a brand new team really and we’re just trying to figure it out from being overseas. Turkey is a really tough team and they are good servers, we are just working really hard and trying to make great angles, and again, I think it is just (about) time.”

United States middle blocker Tori Dixon: “It is always good to put on the uniform, no matter what the outcome is. It was a great opportunity to compete. Turkey is a really good team and I am happy with how our team fought back at the end.”

Turkey coach Giovanni Guidetti: “I don’t know when the last time Turkey beat the USA. I don’t think many times in history of Turkish volleyball. We are just at the beginning of the tournament where every team is not really ready and making many experiments. But of course, this kind of match is difficult for this young group because we are facing one of the best teams in the world. We are leading 2-0, and even when they come back we were able to win the tiebreak. That means our team is mentally strong and did not give up, and that is the most important thing. In the fifth set we didn’t make too many mistakes. Our serve worked really well, and our block worked really, really well and that was the difference.”

Turkey captain Eda Erdem Dundar: “We just entered the court with a free mind. We said girls, let’s just enjoy and do whatever we can do. Let’s do our best. The first two sets actually, we played really good. We helped each other, we didn’t do unforced errors and we were 2-0 in front, but then USA started to play good and also they changed their lineup. They joined back to the game. They serve very good … and they really pushed us with the serve and it the third and fourth set, we couldn’t receive well. but, at the end, in the tiebreak set, we were so excited. We knew that if we win 15 points, we are going to win that game and we just went point by point. At the end, we helped each other and we won the game.”