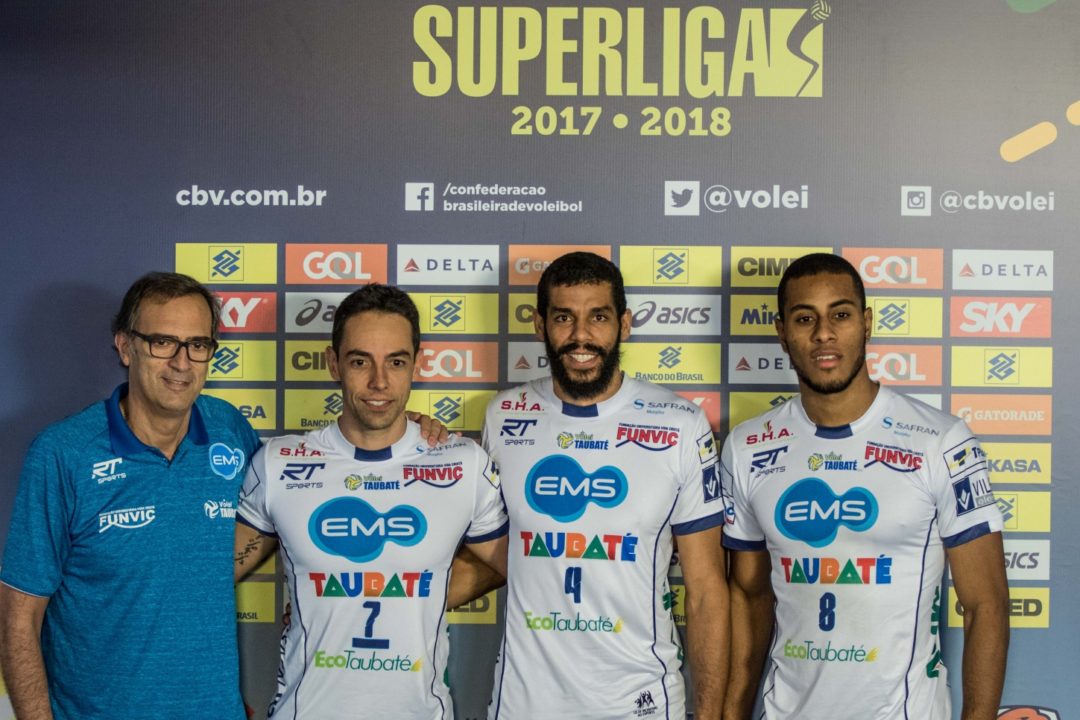 Volleyball fans got a special treat this week, as both Funvic EMS/Taubaté and Sada/Cruzeiro, two of the best male teams in the world, played two games in a span of 5 days. Their first match, played on 11/1, was a head to head battle, in what many believed served as a preview to this season’s Superliga finals match up. Taubaté came out on top with a 3-2 (21/25 26/24 28/26 24/26 15/6) win behind Ricardo Lucarelli‘s 15 points. Yoandy Leal led the way for Cruzeiro with 21 points. Five Taubaté players scored in double figures, which allowed the team to win the game even though it was less efficient than Cruzeiro in hitting, receiving, and blocking (45% to 42%, 31% to 22%, and 18 to 15, respectively).

Taubaté  took to the court again on 11/5 as Marko Ivovic had his first start of the season. It beat Lebes Canoas 3-0 (25/19 25/18 25/22) behind Wallace Souza’s 13 points. Ivovic had a solid performance with 9 points, as he slowly gets back into playing shape after suffering an ankle injury during the off-season. Leandro Silva had 11 points in the losing effort. Canoas was out-blocked 8-2 on the game.

Here are the results for all of the week’s remaining games:

Team of the Week: Taubaté

Cruzeiro has dominated the world of volleyball for so long that it is hard to remember the last time they lost a game. It’s no surprise then that Taubaté has always come short when facing this volleyball powerhouse. Things took a different turn, however, this time around, as the team rose to the challenge and finally won one against their number one rivals.

Player of the Week: Yordan Bisset

The young Cuban outside hitter had a phenomenal all around game. He hit an unbelievable 75% (12 of 16), which is something that resembles a middle blocker’s attacking rate, definitely something very hard for outside hitters to achieve. He also had 3 aces and 3 blocks on his 18 point performance that helped Minas secure a win and a fourth place in Superliga’s current standings.