TCU rallied from down 2-1 to best North Texas in five sets on the road Friday night to move into the NIVC Third Round.  Current Photo via TCU volleyball 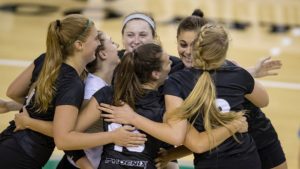 DENTON, Texas – TCU rallied from down 2-1 to best North Texas in five sets on the road Friday night to move into the NIVC Third Round.

TCU hit .647 with just one error in the decisive fifth set. The Frogs cruised to a 9-4 lead as Buckingham downed two kills and Ashleigh Martin added a kill and a block. North Texas called timeout and rallied to within three at 11-8 after a York ace and TCU miscue. Walsh took over from there, notching four kills down the stretch en route to the 15-10 win and the match.

It would only be fitting for Anna Walsh to finish it off as the junior puts down kill No. 25 to seal the 3-2 victory on Friday!#GoFrogs pic.twitter.com/ckkO8DdOXD

The teams tied 10 times in the first 28 points of the match. North Texas gained some separate after the 14-all tie with an 8-3 run including kills by four different players. Down 22-17, TCU recovered to tie the score at 23 on the second of two aces by MacLean, then capitalized on a service error to fight off a set-point try at 24-23. IN the end, Wright and Teakell downed kills to give North Texas the 26-24 win.

The Horned Frogs jumped out to a six point lead in Set 2, going up 12-6 with help from six UNT errors. Later trailing 20-14, the Mean Green surged with a 6-1 run to make it a one-point game at 21-20. Valerian had two kills and Milam added a kill and an ace in the rally. TCU held on for the 25-21 win thanks to two kills and a block by Walsh. A hitting error capped the set to even the match.

North Texas trailed by as many as five in Set 3 at 20-15, but used kills from five different players and three TCU errors to steal away the 25-23 win.

The Frogs led 13-9 in Set 4 after MacLean notched two kills and a block, but North Texas surged ahead 19-17 with a run including  two Chamberlain kills and three TCU errors. The Mean Green was two points from ending the match at 23-21, but TCU stayed alive and extended the match with a 4-0 run, including two Buckingham putaways.

With the win, the Horned Frogs have earned the right to host third round matches in Fort Worth on Wednesday. TCU will face Green Bay, while UC Irvine and Texas Tech will meet in the other quarterfinal.

Another career-high night offensively pushed the TCU volleyball team into the National Invitational Volleyball Championship (NIVC) Elite 8 with a 3-2 (24-26, 25-21, 23-25, 25-23, 15-10) victory over North Texas on Friday night at the North Texas Volleyball Center in Denton, Texas.

With the victory, TCU secures its place in the NIVC Elite 8 for the first time in program history and will host the third and fourth rounds at The Rickel in Fort Worth from Dec. 6-7.

Trailing 2-1 in the match and down 23-22 in the fourth set, TCU used a kill from Abigail Buckingham to spark a 3-0 run and steal the set to send the match into the decisive fifth set. From there, it was all junior Anna Walsh in the final frame as she put down seven kills to score a career-high 25 kills in the match to secure the comeback for TCU.

Along with Walsh’s career-high kills, Lexi MacLean also put down 14 kills and Buckingham finished with 10 kills. Dani Dennison picked up 21 digs in the match to lead the defense, while Berklie Baker and Kayla Scheevel were each responsible for 13 digs. As a team, TCU record 14.0 total blocks with Walsh and Swanson leading the way with 7.0 each.

Stat of the Match
25 – The number of kills that Anna Walsh totaled in the match to mark a career-high for the junior. Walsh also became the first TCU player to score 20+ kills in a match this season.

Quotes of the Match
TCU Director of Volleyball Jill Kramer
Opening Statement
“First of all, North Texas is a really great team and they have had a great year. Andrew (Palileo) has done an amazing job here. They are really physical and they have some really good volleyball players on that team. We knew that coming in and we were going to have to serve really tough and keep them out of system to have really any type of success defensively. Our team was locked in really well and we talk about playing better for longer a lot and I thought we did that tonight. I am proud of them for sticking it out and there were times that we got down and we fought back. There were times we were up by a lot and we let them back in and we didn’t let any of that phase us. We stuck with it the whole time and just kept fighting. That is what good teams do.”

Up Next
TCU will host the third and fourth rounds of the NIVC starting on Wednesday, Dec. 6 inside The Rickel at the University Recreation Center. The Frogs will welcome UC Irvine and Texas Tech for a match at 4 p.m., before taking on Green Bay at 7 p.m. The winners of the two matches will play in the semifinals on Thursday, Dec. 7 at 7 p.m.

“This season went by in a blink of an eye because we were having so much fun together,” junior setter Karley York said. “It’s hard to have a season come to an end when you love these people so much.”

“We’ll reflect on it once we get further away from the season,” North Texas head coach Andrew Palileo said. “I’m disappointed in the loss, but on the other hand, I’m not because we set a lot of records and had a lot of firsts.”

Senior outside hitter Alexis Wright led the team with 16 kills, and freshman outside hitter Valerie Valerian and senior middle blocker Holly Milam joined Wright in double-digits with 14 each. Milam tallied a team-high 16 digs. Wright posted eight of her 16 kills in sets four and five.

“I didn’t really make a physical adjustment,” Wright said. “I just wanted to be there for my team.”

Senior middle blocker Amanda Chamberlain had the most kills (9) since Nov. 9 against Western Kentucky, and fellow senior middle blocker Mikali Myers saw action in Friday’s match. With Wright and Milam leading the way in kills and digs, respectively, the seniors left it all on the court in their final match.

”I just wanted the seniors to go out on a good note,” Palileo said. “I challenged them, because in a do-or-die situation, we have to rely on them. We needed them to step up.”

The Mean Green (29-4) were doomed from the beginning of each set, trailing 4-1 in the first set, 9-4 in the second set, 6-2 in the third set, 7-3 in the fourth set, and 9-4 in the final set. However, North Texas managed to claw back in each set as the largest final score margin was five points in the final set.

“It’s hard, especially in that fifth set, when you’re only playing to 15,” Wright said.

The momentum seemed to shift in the Mean Green’s favor in the third set, closing out the frame on an 8-2 run, led by a pair of kills by Wright and a kill and ace for Valerian.

With a two-sets-to-one lead, North Texas committed half of their eight attack errors in the fourth set early on as TCU (14-16) took an 8-4 lead. Trailing 14-11, the Mean Green once again fought back with an 8-3 run to take a 19-17 lead. After a pair of Wright kills put match point in sight at 23-21, the Horned Frogs scored four straight points to take the set and a force a set five.

• The Mean Green’s .193 team hit percentage is the third-lowest in a single-match this season.