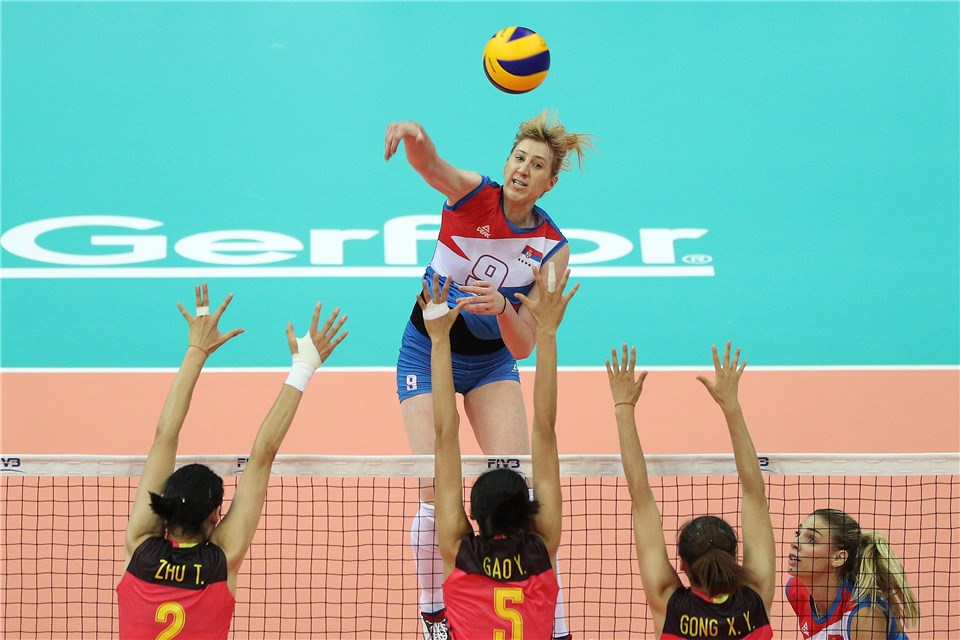 Serbia's Brankica Mihaljovic scored the most points (46) of any player in week 1 of the 2018 FIVB Women's Volleyball Nations League. She'll lead her team to a rematch of last year's Grand Prix bronze medal match. Archive Photo via FIVB

Serbia and China are two of the best teams in this tournament, though both suffered a surprise loss in the opening week. China, after dominating its first two opponents, was swept 3-0 by a young South Korean team. But, without their superstar Zhu Ting, and relying on a very young team, there won’t be much concern in Beijing, as the team is guaranteed a spot in the Final 6 as hosts anyway.

Serbia, meanwhile, was beaten on that same day 3-1 by Brazil – even though Brazil had looked rocky earlier in the week. Serbia, like China, didn’t lose a set before they lost their 3rd match.

A  projection for teams to advance to the Final 6 could be around 25 or 26 points. If a team can win two of their three matches every week that would set them up well.

Note: China is highlighted because they have secured a spot in the Final 6 as the event’s host. Teams with asterisks (*) are in this pool.

This pool has a dichotomy between the top teams and the bottom teams, with China and Serbia being a potential finals preview, while Poland and Thailand are likely to be battling in the bottom half of the table. The big matchup will take place on the final day of the pool, Thursday, May 24th.

In last year’s Grand Prix, Serbia beat China 3-1 in pool play, and repeated the same score in the bronze medal match. China had Zhu Ting in both of those matches, and Serbia was still able to win both in fairly-comfortable 4th sets.

There’s still been no word out of China as to whether Zhu will return, but comments from her coach last week indicate that she’ll rest again (she’s on a rare ‘vacation,’ visiting family) before re-joining the team next week in Hong Kong for their 3rd-straight pool on home soil.

Poland only came away from the first week of play with 1 victory, over a neutered Italian team, but put up a good fight in their opener against the United States, before losing handily to Turkey. They should be the favorites against Thailand: a win that they’ll desperately need to keep in any kind of contention for the Final 6.

Yuan Xinyue will not be in Macau. She will be playing in the Army Volleyball competition along with Gao Yi and Liu Yanhan