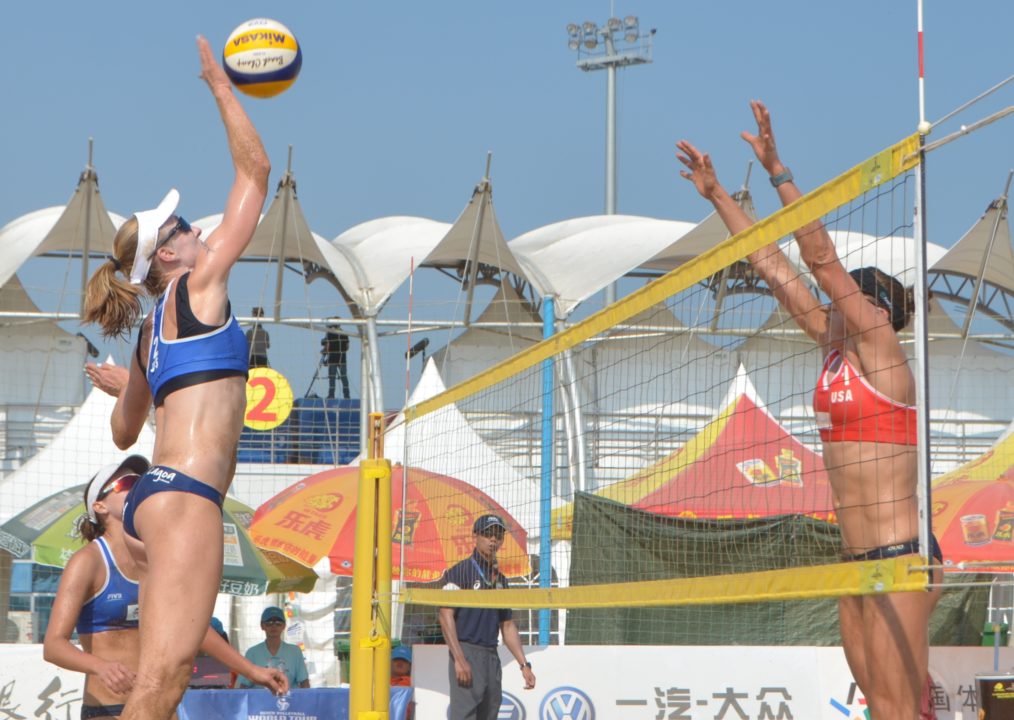 No. 2 Emily Stockman/Kelley Larsen, No. 3 Betsi Flint/Emily Day and No. 24 Caitlin Ledoux/Sarah Sponcil picked up a pair of victories on Saturday to earn a spot in the Haiyang semifinals beginning at 9 p.m. ET. On the men's side, two Brazilian pairs are among the final four.  Current Photo via FIVB

Four women’s teams representing the United States were among those that advanced to the quarterfinals on Saturday morning and at the end of the day, three were left standing heading to Sunday’s semifinals.

No. 2 Emily Stockman/Kelley Larsen, No. 3 Betsi Flint/Emily Day, No. 6 Amanda Dowdy/Irene Pollock and No. 24 Caitlin Ledoux/Sarah Sponcil were among the eight winners in the second knockout round.

Flint/Day and Sponcil/Ledoux advanced to the quarterfinals with tiebreak victories, each rallying after dropping their opening sets. Flint/Day topped No. 23 Anja Dorfler/Stephanie Wiesmeyr of Austria (17-21, 21-12, 15-5), while Sponcil/Ledoux moved on with a 15-21, 21-10, 15-11 effort against No. 19 Megan McNamara/Nicole McNamara of Canada.

Once into the quarterfinals, Flint/Day had to face off against countrywomen Dowdy/Pollock, winning in straight sets 21-12, 21-16.

“It feels great,” Ledoux said. “It’s our first tournament together, so getting to the semifinals is really a big accomplishment. We knew that we were playing a great team, but our communication through the match was really good. As a new team we had to focus on what we are doing on our side and be able to talk through plays and always look forward to the next play. I think we did a great job on that. I hope we can keep building on that.”

Stockman/Larsen will battle Schneider/Tillmann in the first semifinal, while Flint/Day will face fellow Americans Ledoux/Sponcil for a shot at the gold medal.

Three of the four quarterfinals went the distance, with Likejiang/Jiaxin the only team making it through in a short match, although even that went to the wire (22-20, 23-21).

“We are getting better each day,” George said. “We played as a team and prevailed with great rallies and blocks. Thiago blocked very well. We started very well in the first set and got some points from it, but we slacked a bit in the second set. We had to keep our patience in the tie-break set.”

“I’m happy because this is my first 3-star event and we reached the semifinals,” Luciano said. “My teammate helped me a lot in this game. Brazil versus Brazil in the semifinals will be very hard, but we hope that we will win against George and Thiago.”

The quarterfinal marked the second three-set match of the day for George/Thiago, who had to fight through Slovenia’s Zemljak/Pokersnik 21-18, 19-21, 16-14 in the second round earlier in the day.

Huber/Dressler also went the distance in Round 2, topping Turkey’s Mermer/Urlu. Fourth seeded Americans Stafford Slick/Casey Patterson and No. 6 Bill Kolinske/Miles Evans each were knocked out in Round 2, falling to Alvaro Filho/Luciano and Thailand’s No. 21 Nuttanon Inkiew/Sedtawat Padsawud respectively. The latter match saw Kolinske/Evans win the opening set 24-22, before falling 21-14, 15-12. 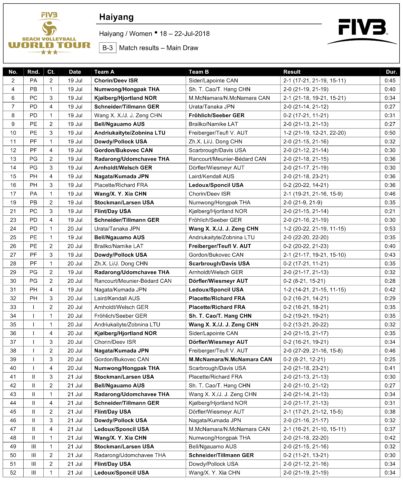 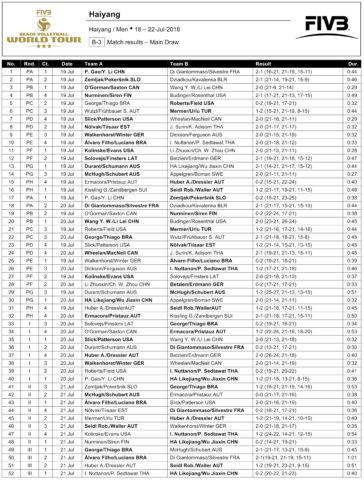