Top Seeded Alvaro/Saymon Out as Round of 32 Wraps Up 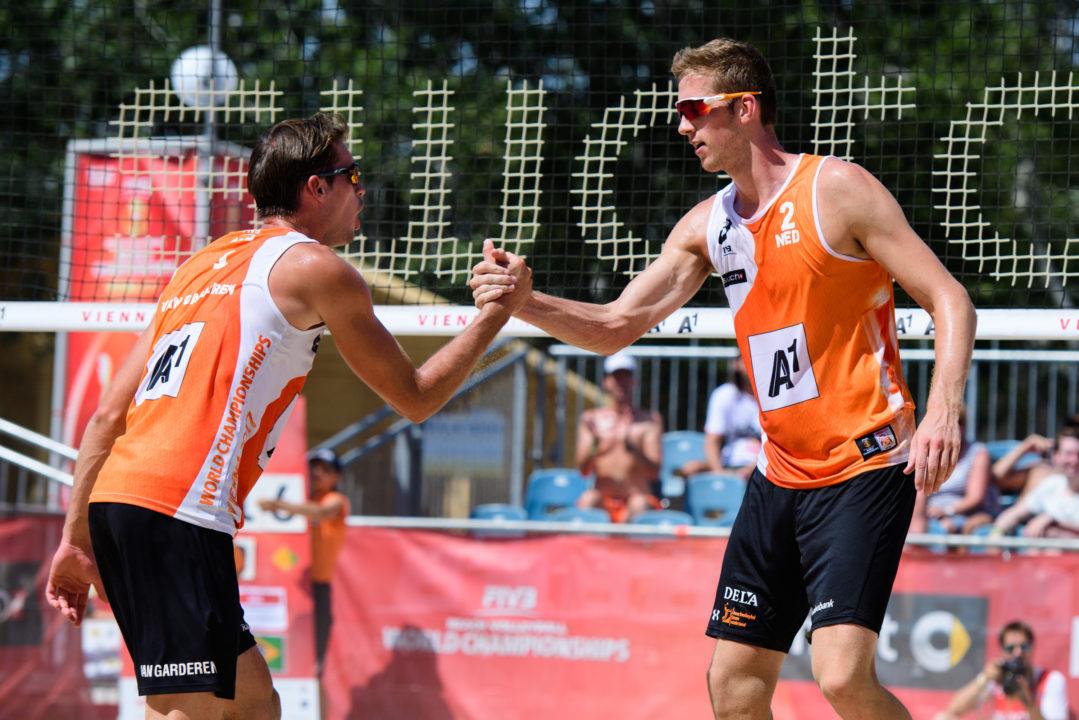 Christiaan Varenhorst and Maarten van Garderen of the Netherlands pulled the upset, topping the top seeded Brazilians in straight sets, 21-17, 21-18 with help from 12 miscues. Current Photo via FIVB

Top seeded Brazilian duo Alvaro Filho and Saymon Barbosa already made history of one of just two No. 1 seeds to drop a match in the preliminary  round, and now the duo are out of the tournament just one match later in the Round of 32.

Christiaan Varenhorst and Maarten van Garderen of the Netherlands pulled the upset, topping the Brazilians in straight sets, 21-17, 21-18 with help from 12 miscues.

“Their strategy really worked against us today. We beat them in The Hague earlier this season, but they were the better team today,” Saymon said. “Of course we expected to go one or two steps further on this tournament, but it’s only our first season together and we had some pretty good results. We keep believing in our team, we keep working hard and preparing for the next tournaments.”

Olympic silver medalists Paolo Nicolai and Daniele Lupo, the No. 11 seeds, also are out after a 21-19, 21-19 loss to Canadians Sam Pedlow and Sam Schachter.

No. 10 seed Alexander Brouwer and Robert Meewsen of the Netherlands also were upset on Thursday. Nine of the Top 12 seeds remain as the tournament moves into the Round of 16 on Friday.

No. 5 seed Alison Cerutti/Bruno Schmidt of Brazil, the defending Olympic gold medalists, are on to the quarterfinals after an easy 21-15, 21-7 win over Edgards Toc/Rihards Finsters of Latvia.

Only one of the three American duos survived the Round of 32, with the other two falling in three-set affairs. No. 3 seed Phil Dalhausser and Nick Lucena topped their Italian foes 21-18, 21-17 to move on. Ryan Doherty and John Hyden lost to the tournament’s No. 2 seed Janis Smedins/Aleksandrs Samoilovs, while Theo Brunner and Casey Patterson were edged by No. 12 Clemens Doppler and Alexander Horst of Austria.