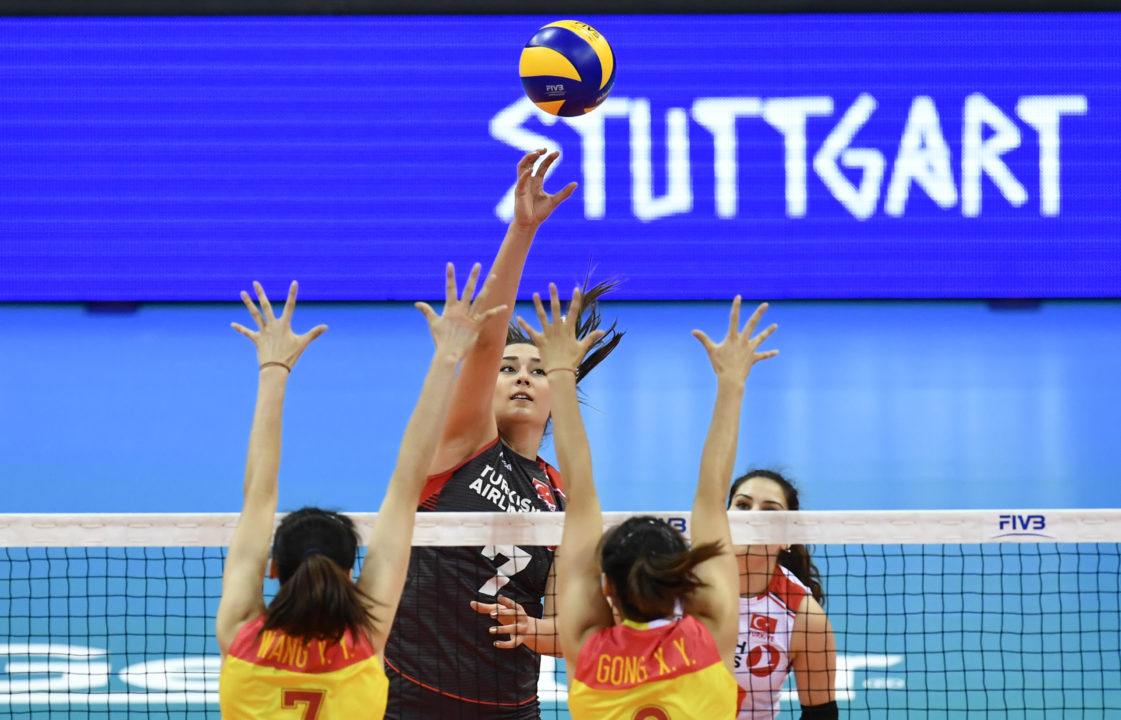 A 20-point lead in kills was the difference for Turkey in a hotly contested match with China to wrap up VNL play. The Dutch edged Germany in every way in a four-set victory to cap its VNL preliminary round efforts.  Current Photo via FIVB

A 20-point lead in kills was the difference for Turkey in a hotly contested match with China to wrap up VNL play.

Xiangyu Gong was the top scorer for China with 18 points (11 kills, 5 blocks, 2 aces), while Yingying Li (12), Xinyue Yuan (11) and Yuanyuan Wang (10) followed. Li racked up 10 kills, while Yuan added seven putaways, two blocks and two aces. Wang notched a team-best five blocks to go with four kills and an ace. China went 12 deep in its roster in the loss.

After falling behind early, Turkey claimed a 13-9 lead midway through with help from a 5-1 run led by Karakurt. Yingying and Wang kept China in the game, but Baladin had the last say in the stanza supplying an ace as Turkey won it 28-26.

China led by three early in Set 2 only to see Turkey score five straight to grab a 10-9 advantage. Gunes and Beyza Arici led the way from the service line as the Turkish lead soared to four at 16-12. Karakurt and Baladin helped close out the 25-21 victory.

China’s block coupled with encouragement from Yuan and offense care of Yingying, helped the team pull through with a 25-20 Set 3 win to extend the match.

The Chinese jumped out to an 11-7 lead in Set 4, but Turkey answered with a five-point run with Gunes at the end line and Baladin dropping bombs. Gong exited the match with an ankle injury and China stumbled momentarily, but stayed close. In the end, Ismailoglu came through from the end line to close out the match at 25-20.

The teams will meet again in Nanjing at the VNL Final Six, which begins on June 27.

The Dutch edged Germany in every way in a four-set victory to cap its VNL preliminary round efforts.

Nika Daalderop took the reins for the Dutch, scoring a match-high 20 points with 18 kills and two aces. Juliet Lohuis (17), Lonneke Sloetjes (16) and Yvon Belien (11) followed. Sloetjes chipped in 15 kills and a block, while Lohuis was all over the place with eight kills, a match-high six blocks and three aces. Belien tacked on six kills, four blocks and an ace, while Celeste Plak rounded out the scoring with nine points, all on kills in the first three stanzas.

The Dutch started slow, but eventually built a 10-7 lead in Set 1 as Plak found her footing. The teams were soon tied at 13-all thanks to Scholzel’s heroics. Belien continued to lift her level and Daalderop came through in the even as the Netherlands clinched a 25-21 win.

An error riddled second set had German coach Felix Koslowski fuming, but it did little to settle his team as the Dutch went on to a 25-16 win behind Lohuis’ blocking. Plak and Sloetjes excelled offensively and Femke Stoltenborg supplied key serving in the victory.

The Netherlands stumbled in Set 3, while Stigrot heated up for Germany. Vanjak lifted the Germans to a 21-19 advantage and a Plak miscue sent the match to a fourth set.

The Dutch recovered with a 25-19 win behind Daalderop and Lohuis. Germany stayed close as Stigrot battled, but Sloetjes and the Netherlands closed out the match.