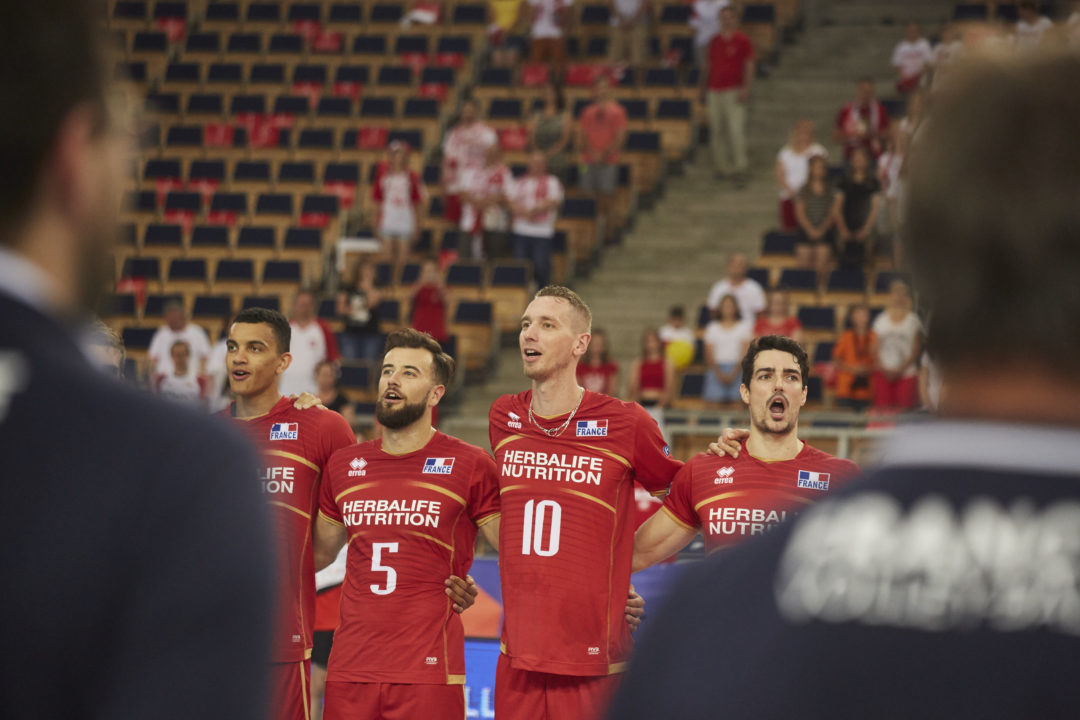 France has made just one change heading into week 4 of the FIVB Men’s Volleyball Nations League, and that’s the return of starting middle blocker Kevin Le Roux to the lineup.

He’ll take the spot of Daryl Bultor, who started one of France’s 3 matches last week in his first national team duties of the summer. That match, a 3-0 win over winless South Korea, saw Bultor hit 80% and score 6 points (4 kills, 2 blocks). He also served as a late-match sub and scored 2 more points.

The French have rested different players at different points of the inaugural edition of this tournament, but in week 4 they’ll have essentially their ‘best’ lineup in play in Pool 16 in Varna, Bulgaria when they face off against Canada, Brazil, and Bulgaria. This is a crucial pool for France as they test their might heading toward the Final 6, because it includes the team that France beat for World League gold last year Brazil, and last year’s World League bronze medalists Canada.

France is guaranteed of a spot in the Final 6 as that stage’s host.

The pool will also include the hosts Bulgaria, who will have an emotional boost not only from the home crowd, but from Georgi Bratoev, who has returned to the Bulgarian lineup just 2 weeks after an ankle injury that was initially feared to be a break, turned out to be a sprain, and was expected to keep him out for the remainder of the tournament.

Le Roux has seen limited action in this year’s tournament (he’s scored only 24 points in the first 3 weeks of play), but was a key contributor as France’s leading blocker in last year’s World League. He was dialed up late in the tournament last year as well, where his 13 blocks in the 4 matches of the Final 6 tournament were almost as many as the 14 he had in the 9 matches of the preliminary stages.

In an interview the French federation this week, France’s most creative and volatile player Earvin Ngapeth said that this weekend’s play is important, but quickly turned his focus to the next weekend, where France plays in Modena.

Ngapeth has played for Azimut Modena, the pro side in Italy, since 2014, but announced earlier this year that he was signed to join the 4-time defending European champions Zenit Kazan in Russia next season.

Ngapeth also said his time in Qatar, where he had a cameo appearance after the completion of his Italian season, was a good spot for him to sharpen his technical and physical skills and stay in shape for the start of the Nations League.

Speaking of head coach Kevin Tillie’s rotation, which has given a lot of players action in different situations this season, Ngapeth said that the rotations were important, not just because of the rest he and the other stars receive, but because of the rhythm.

“Yes, but beyond that, it’s important because we know that in Lille, we will need everyone, so it’s positive that all players come with paws and rhythm It’s good that everyone is participating in the party and we are all ready for the Finals, because to win the Volleyball Nations League, we will need the fourteen players.”

The only gap now in the full-fledged French lineup is Trevor Clevenot, who returned to the team’s roster in week 2, and has spent the last 2 weeks as the backup to one of the world’s elite liberos Jenia Grebennikov, but hasn’t actually seen the court yet. Clevenot is still working his way back from shoulder surgery, and has been included in the French team so that he could continue rehab under the watchful eye of the National Team staff – if not for this Nations League, then for the World Championships at the end of the summer.

France’s Roster for Week 4 of the 2018 Volleyball Nations League in Varna, Bulgaria