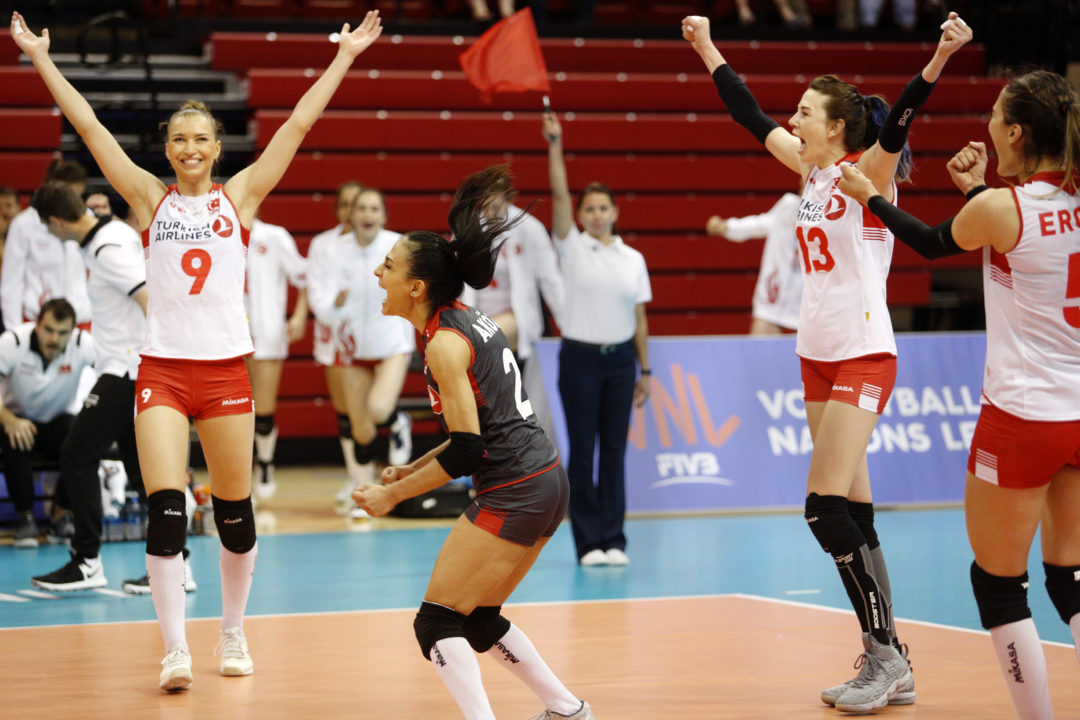 Turkey outdid Italy 47-29 in kills and did not allow the Azzure a lead in the match until the 3-2 point of Set 2 en route to a shocking sweep to kick off Volleyball Nations League action in Lincoln, Nebraska. Current Photo via FIVB

Turkey outdid Italy 47-29 in kills and did not allow the Azzure a lead in the match until the 3-2 point of Set 2 en route to a sweep.

Notably the Italians were missing star youngster Paola Egonu, who was left off the opening weekend roster.

The Turkish side had just one ace, that coming off the hand of Seyma Ercan.

Italy was led by Anastasia Guerra, who notched 13 points, with 11 kills, a block and an ace. Serena Ortolani followed with seven points, tallying six kills and a block. Six other players notched kills as Italy went three players into its bench for support.

Rossella Olivotto, Marina Lubian and Ofelia Malinov put up two blocks apiece to help the team to a 10-7 lead in stuffs.

After being outdone 19-6 in kills in the first set of the match, Italy kept things closer in Set 2. seemingly had an answer for every point, however, turning a 10-9 deficit into a 15-12 lead of its own as Ercan chipped in three kills. Italy was within two late at 22-20, only to see the set slip away on a final 3-1 Turkish run capped by back to back kills by Cansu Ozbay, the last on a dump set.

Italy led midway through Set 3, but again saw the tides turn toward Turkey, which outscored its foes 10-6 down the stretch, capping the win on a missed serve by Camilla Mingardi.

Turkey coach Giovanni Guidetti: I am happy about how the team played. I enjoyed the atmosphere on the court. I liked the spirit of the players and the way they fought for every ball. We are really in the beginning with our training and starting with a victory is always a good feeling.

Turkey captain Eda Erdem Dundar: We started really good. We know Italy are strong, young and a fresh new team like us. We put all our energy on the court. We are a young team but we have so many talented players. When enjoy when we play together. Today we showed that we are real fighters. We don’t give up. We got a good result to start the tournament with a 3-0 victory.

Italy coach Davide Mazzanti: Kudos to Turkey for the game. We gave away too much especially in the second set. We are working on attacking. Sometimes we lose our timing and we are working on that. Today we were not able to do well in defense and blocking. Turkey had the chance to profit from our weakness today.

Italy player Serena Ortolani: We could not play our level. We had many difficulties at the beginning of the game. Maybe we had some emotions for the first match of the tournament. We must raise our level in an important match with Poland.