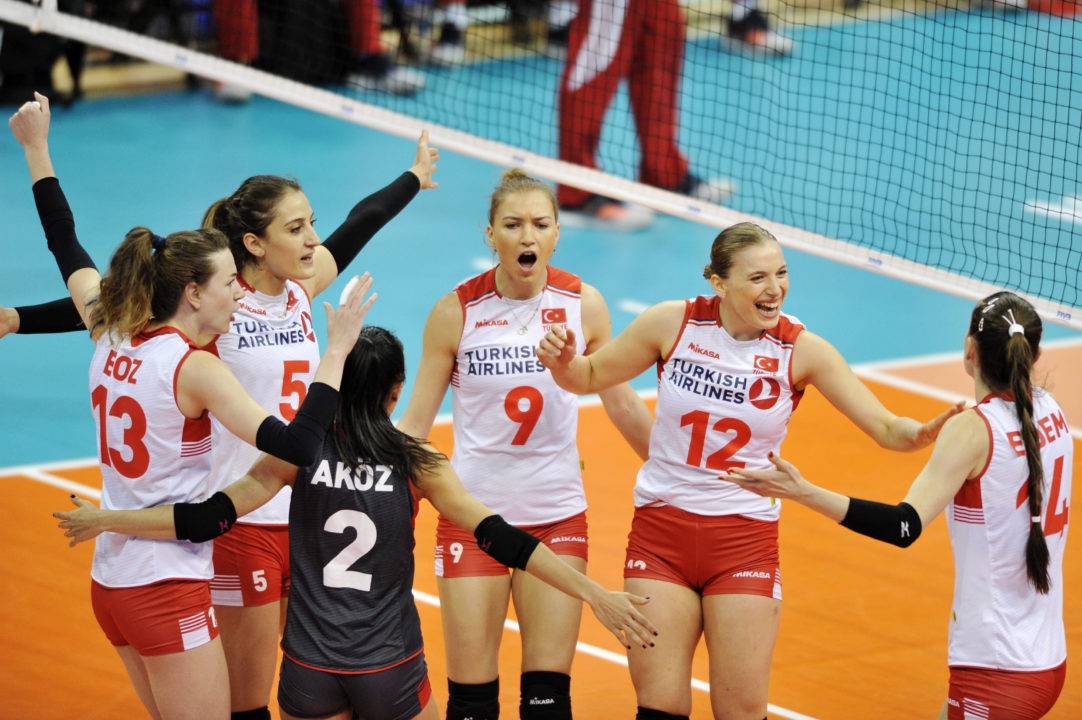 Turkey spread the offense around, with eight players tallying a kill, and used both of its setters in a sweep of Poland. The Turkish side had to rally in Set 3 to close out the win, coming back from a 12-7 deficit to grab the 25-23 win and go undefeated on the week.  Current Photo via FIVB

Turkey spread the offense around, with eight players tallying a kill, and used both of its setters in a sweep of Poland. The Turkish side had to rally in Set 3 to close out the win, coming back from a 12-7 deficit to grab the 25-23 win.

For Poland, Malwina Smarzek scored a match-high 14 points with 12 kills and two blocks. Captain Agnieszka Kakolewska added nine points with four kills, a team-leading four blocks and an ace. Natalia Medrzyk chipped in six kills. Gabriela Polanska added three stuffs in just a set and a half of play.

The teams were fairly even in Set 1, with neither gaining more than a two-point edge until late in the stanza. The teams were knotted at nine, before Turkey went ahead 14-12. Poland answered and tied it up at 16 and 17 and even earned a brief lead at 20-19. From there, however, it was all Turkey, including a pair of blocks and final putaway by Karakurt Ebrar.

Set 2 saw Turkey surge ahead 9-2 early and never look back. Poland trailed by as many as 11 in the set at 18-7, but did not give up. The Polish team was within six at 19-13 forcing a Turkish timeout, and rallied from 10 down (23-13) to cut the margin to six again at 23-17, before succumbing. A service error and a Ismailoglu kill wrapped up the win.

After a crushing Set 2 defeat, Poland came out strong in Set 3, scoring four of the first five points, including an ace by Zehra Gunes. The Polish side built its lead to five at 12-7. Turkey began to chip away from there, narrowing the gap to one at 15-14. Poland held on and led by three at 18-15, before the Turkish attack became too much. Turkey scored seven of the next nine points, including an ace by Caliskan Kubra that pounded into the tape and over to tie it at 19-all. Down 22-20, Poland got back-to-back blocks by Polanska to tie it up. A net violation gave Turkey its first match-point try at 24-22 and a Ercan kill closed it out two points later.

Here’s a look at the postmatch reactions: