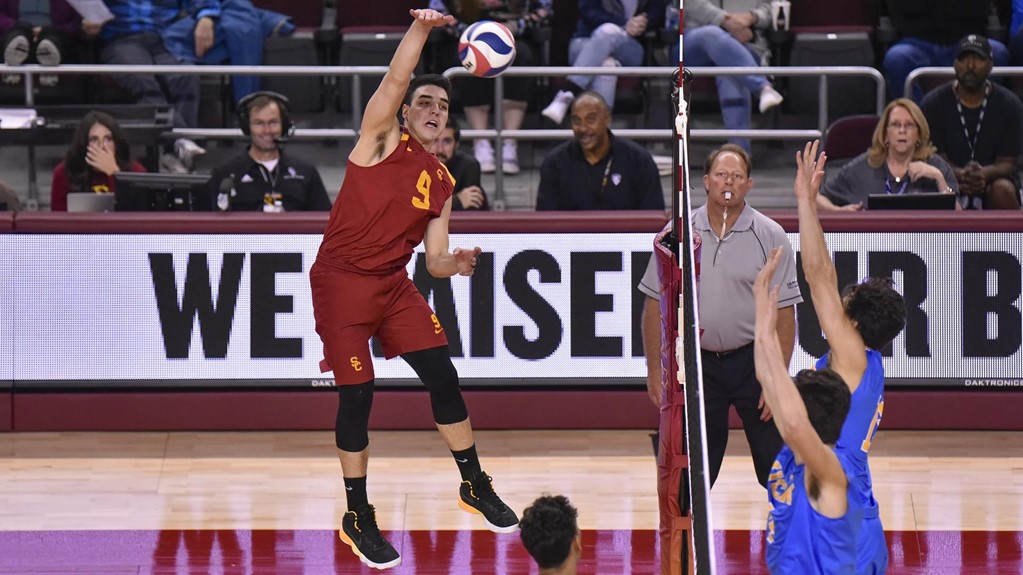 Blocks were key in lifting No. 3 UCLA and No. 14 Concordia Irvine to MPSF quarterfinal sweeps on Saturday night. No. 20 USC meanwhile pulled the lone upset of the night, besting No. 8 Pepperdine in four sets with help from 19 Gianluca Grasso putaways. Current Photo via USC Athletics

Blocks were key in lifting No. 3 UCLA and No. 14 Concordia Irvine to MPSF quarterfinal sweeps on Saturday night. No. 20 USC meanwhile pulled the lone upset of the night, besting No. 8 Pepperdine in four sets with help from 19 Gianluca Grasso putaways.

Junior outside Jordan Ewert was tops offensively for Stanford with nine kills, but hit at a -.043 clip (9-10-23). Freshman opposite Jaylen Jasper tallied six kills, but hit .000 (6-6-19), while redshirt senior middle Kevin Rakestraw added five putaways on a perfect 1.000 clip (5-0-5). Rakestraw was one of five players with a block to his credit, while Ewert served up the team’s lone ace.

It Was Over When: UCLA led throughout Set 3, leading by as many as seven in the 25-18 victory. After a tie at 8, the Bruins scored five straight, including three Stanford miscues, to go up 13-8. From there, the Cardinal would get no closer than three, although they did so six times, last at 18-15. UCLA pulled away for good with a 4-0 run, helped by three Stanford errors and a block by Missry and Gyimah. A Sam Kobrine kill made it 24-17 and a triple block by Hessenauer, Gyimah and Jake Arnitz sealed the victory two points later.

It Was Over When: Leading by just one at 9-8 in Set 4, USC scored five in a row, including two blocks, to vault ahead 14-8. After a service error, the Trojans poured on three of the next four, with kills by Grasso and Jack Wyett, to go up 17-10. A Wyett ace pushed the margin to eight at 20-12, but Wieczorek notched two putaways in a 4-1 Pepperdine run to make it 21-16. Two Lewis putdowns put USC on the hill for the upset at 24-17. A service error paused the Trojans momentarily, but a block by Wyett wrapped up the match and extended USC’s season.

It Was Over When: Concordia Irvine took control of Set 3 with a 4-0 run, which put the Eagles up 10-6 and forced a GCU timeout. Howell notched a kill and a block in the rally, which was capped by a Barsemian ace. Down five at 14-9, Grand Canyon mounted a comeback, scoring seven of the next 11 to narrow the gap to two at 18-16. A block and a kill by Barsemian and two Turner putaways aided the Lopes in the stretch. The Eagles pushed ahead by five at 23-18 as Predney, Darcy Taig and Saada each posted a kill. A Predney putaway and GCU hitting error wrapped up the sweep and sent Concordia on to the MPSF semis.