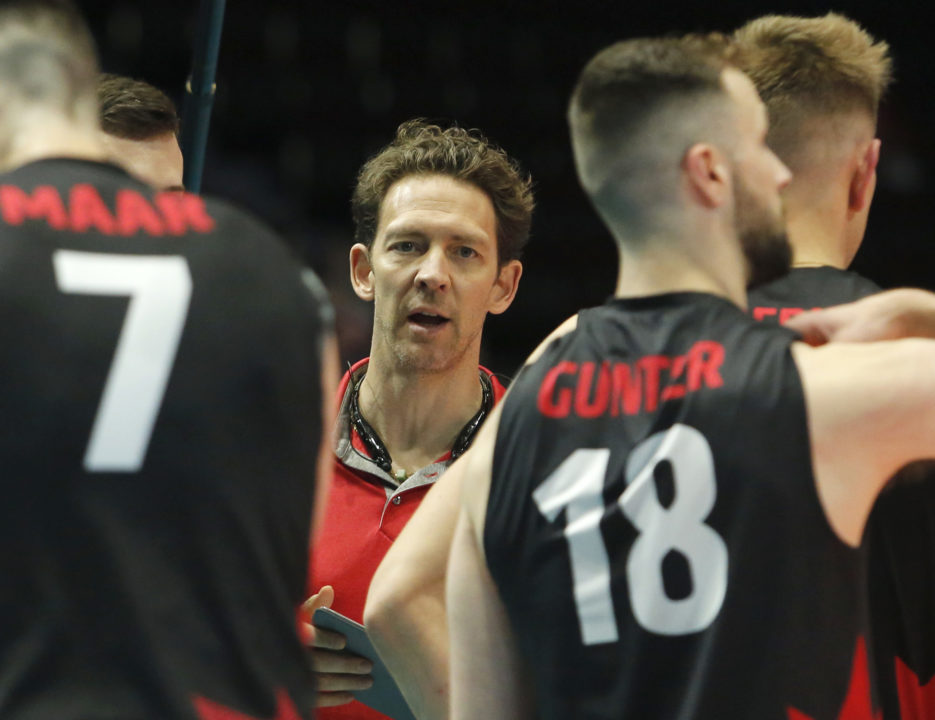 Canadian men's head coach Stephane Antiga (above) will try to lift his team to another new-height at this year's World Championship. Archive Photo via FIVB

As Italy, Japan, Bulgaria, and Finland begin play at the 2018 FIVB Men’s Volleyball World Championships in the honorary host-country opening matches on Sunday, Volleyball Canada has announced their roster. Canada, which has branded themselves as the #VolleyMaples for the tournament, play in Pool B, and will begin their tournament against the Dutch men.

They also will play Brazil, China, Egypt, France, and the Netherlands in their bid to place in the top 4 in the pool, which would advance them to the next round of the tournament. Pool B plays in Ruse, Bulgaria.

Canada has never finished higher than 7th at the World Championships, which happened at the last edition in 2014 World Championships. The team has cleared a lot of superlative hurdles lately, though, including a bronze medal at the 2017 World Ledague that was their best-ever finish in that event.

Canada will have a key piece of that bronze medal team back: Sharone Vernon-Evans, who missed this year’s Nations League with an injury. He made his return to Canada at the Memorial of Hubert Jerzy Wagner Trophy, though Canada went 0-3 in that tournament.

The roster includes 12 of the 14 players who won that World League bronze.

Among the absences from the roster that stands out: Ryley Barnes, who came off the bench and had 10 points in the World League bronze medal match win over the US. He suffered ligament damage and a fracture in his ankle in August, and is expected to miss significant time both for Canada and his pro team Civitanova. Ryan Sclater, the 2017 USports Player of the Year and professional with SVG Luneburg in Germany, has taken over Barnes’ role on the team

Also missing is reserve setter Brett Walsh, who has been supplanted by Jay Blankeneau in that role behind TJ Sanders.

The only change from the Wagner Trophy roster is that Eric Loeppky is out at middle blocker, replaced with National Team regular Stephen Maar.