Volleymob/Brahm Predictions for the rest of First Round 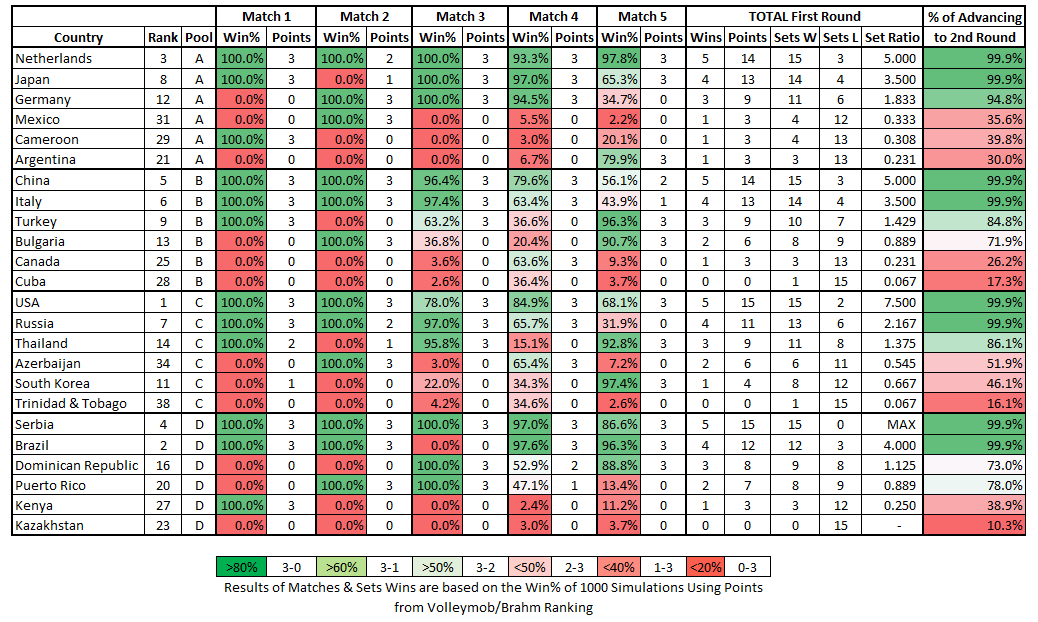 With the halfway point of the first round 2018 FIVB Volleyball Women’s World Championship, we here at Volleymob wanted to... Current Photo via Jeremy Brahm

With the halfway point of the first round 2018 FIVB Volleyball Women’s World Championship, we here at Volleymob wanted to make some quick adjustments to see where our predictions will go for the remaining two or three matches for each of the teams.

If you look back at our predictions from September 26th just before the tournament started, the teams that are leading their pools are pretty much correct. However, Serbia’s 3-0 sweep of Brazil is the major mistake that we had of the big teams. We had thought that the Brazilians would win a close five-set match, which would give them the best record in Pool D at the end of the five matches. Now, Serbia is projected to finish in first in Pool D and Brazil second. This difference will have consequences in the second round. Additionally, with Japan taking the Netherlands to five sets, which we did not predict (although we got the result right), that additional point for Japan right now would put them ahead of Brazil by 1 point entering the second round. With only the top three teams advancing from Pool E, which will have the Netherlands, Serbia, Brazil and Japan, an extra point from the first round can put you in the third round. Japan is favored in all of their remaining first round matches, but I have a feeling that Germany will give the Japanese a scare, maybe going five sets, which would take Japan’s point advantage away.

Moving onto other shocking results so far, Thailand’s upset of South Korea has put the Koreans on the ropes and they followed up their opening day loss with a 3-1 loss to Azerbaijan. A loss to the USA on Tuesday would nearly eliminate the South Koreans with two matches to play. Azerbaijan has used Polina Rahimova to great effect, which has given them a 30% jump in advancing to the second round from the beginning of the tournament. Kenya’s 3-0 win over Kazakhstan was impressive as it was the Kenyan’s first win in the World Championships ever. Lastly is Mexico’s win over Argentina in straight sets. The Mexico win shows how far the Argentine women had fallen and that maybe dropping the captain before the tournament was a bad idea. If Argentina beats Cameroon on the final day of pool play in Pool A, Mexico could possibly make the second round.

Our data feels that Netherlands will win Pool A, China in Pool B, the USA in Pool C and Serbia in Pool D in the first round. Other teams that are expected to qualify for the second round are Japan, Germany, Italy, Turkey, Bulgaria, Russia, Thailand, Brazil, Dominican Republic and Puerto Rico. That leaves two spots left, one in Pool A, mentioned above and then one in Pool C, between Azerbaijan and South Korea. A win by Azerbaijan would all but put them in the second round, and I expect that they will have no problem with Trinidad & Tobago.