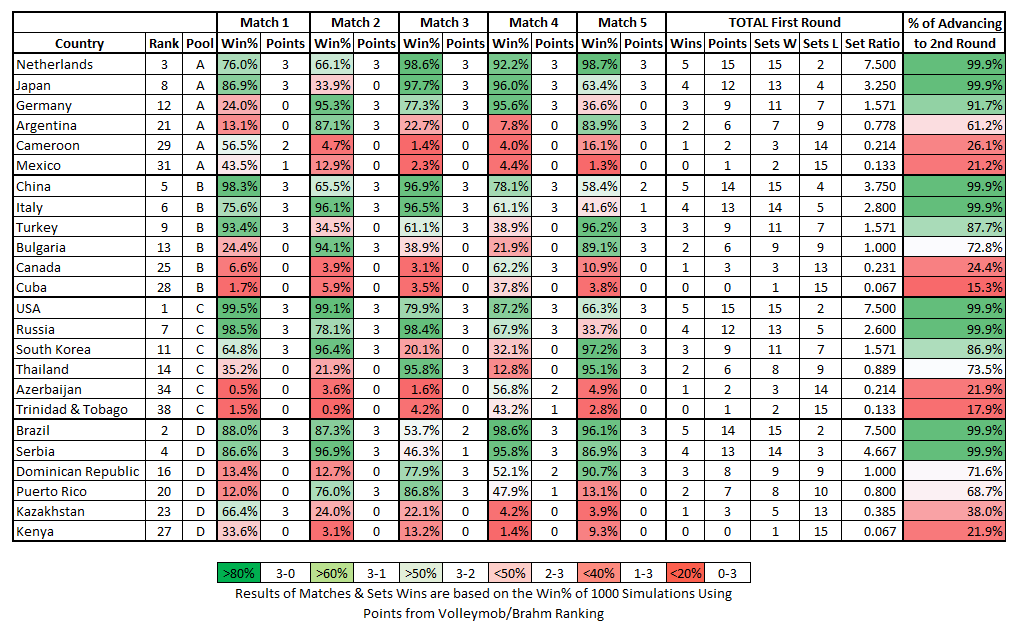 With the 2018 FIVB Volleyball Women’s World Championship in Japan starting on Saturday afternoon (Friday night on the West Coast of the USA and Canada), we at Volleymob wanted to take the Brahm Ranking system and see if the predictions that he had done for the men’s tournament would also work on the women’s tournament. We are using the Volleymob/Brahm women’s national team rankings at the end of the August 2018.

The picture that you see above is a prediction for each of the pool in the first round of the 2018 FIVB Volleyball Women’s World Championship. Here is how the calculation for each match and pool was created.

With that said, we shall look at each pool to determine which teams will advance and which matches may change these predicted results.

In Pool A, the Netherlands are favored to win every match in the first round, including over the hosts Japan. I expect them to win the pool with a perfect 5-0 record and 15 points. The only match Japan is not favored in is against the Netherlands but they should finish second at 4-1 and 12 points. They may face difficulty in their final match of the first round against Germany. Germany is an overwhelming favorite against the three weakest teams in the pool of Argentina, Cameroon and Mexico and will finish in third place at 3-2 with 9 points. Argentina from my projections will take the fourth spot and be the last team in Pool A to advance to the second round at 2-3 with 6 points. Cameroon in my mind would be the only team to possibly overtake Argentina as they were close to defeating Argentina in 5 sets at the 2016 Rio Olympics inpool play. Mexico is just overmatched in this pool.

Over to Pool B, aka the “Pool of Death”. With China, Italy and Turkey being placed together in this pool the chances that one of the three will be going home after the second round is very high as they will face the USA and Russia in the second round. It would be crazy if all three teams finished at 4-1 in the first round. I can see it happening, but on my projections, it won’t. China is favored to win in all of their matches and a 5 set win over Italy in their final match of the first round takes them to 5-0, but 14 points. Italy should easily take care of Bulgaria, Cuba and Canada, and have some difficulty with Turkey to finish second at 4-1 on 13 points. Turkey could pull a surprise over Italy and China, but Turkey also should easily defeat Bulgaria, Cuba and Canada. They will be third at 3-2 with 9 points. Turkey being the odd one out at the end of the second round (right now). Bulgaria should dominate Cuba and Canada to take the final spot in the second round.

In Pool C, the USA and Russia will battle for first place in the final match of the pool. However the USA should win the match and finish in first place with a perfect 5-0 record and 15 points. Russia would be second at 4-1 with 12 points. South Korea should take care of the others in the pool Thailand, Azerbaijan and Trinidad and Tobago to finish third at 3-2 with 9 points. The projections show Thailand finishing in fourth at 2-3 with 6 points. However, if Azerbaijan uses the high scoring sensation of Polina Rahimova, it could defeat Thailand and take the fourth spot. Trinidad and Tobago are playing in the World Championships for the first time and will have difficulty with much tougher competition.

Finishing with Pool D, Brazil and Serbia are both >86% favorites in each of their matches, except in the head-to-head between the two teams. Brazil is a slight favorite in the match against Serbia, which will allow them to win the pool at a perfect 5-0 with 14 points. Serbia will be second at 4-1 with 13 points. Of the remaining four teams, the Dominican Republic are favored in their other three matches and should finish in third at 3-2 with 8 points. Puerto Rico is favored over Kazakhstan and Kenya and should finish in fourth at 2-3 with 7 points. Kazakhstan and Kenya will have more of a chance to win against Puerto Rico than the Dominican Republic, but I don’t think that they will.

Remember the predictions are ranking points scored from on individual match results scored over a four year period and different from the FIVB ranking. The last three years the Turkish women’s team had dropped from a 5th place my ranking in May 2015 to 18th to start the points this year in May. They are now 9th. Their wins this year mean more in my ranking system. I do believe that this team will surprise people. I mentioned that in the article. Italy and China cannot take Turkey lightly in the first round. I was upset when the USA lost in the VNL preliminary round on opening night to Turkey. However as the matches kept going it proved not to be a fluke, they are good.

That’s very interesting data.Thank you
And I wish the Korean Team a victory.