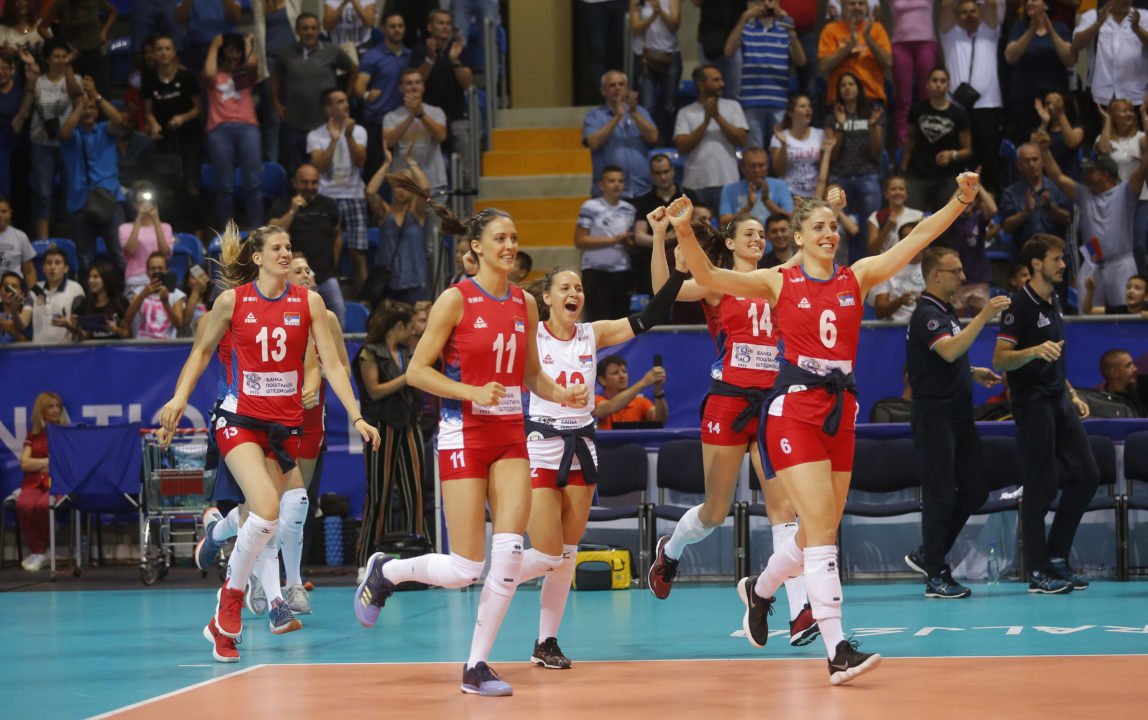 Irina Voronkova was too hot to handle for Belgium as the Russian star put up 23 points in a four-set win Thursday. Serbia picked up two key points in the VNL standings, rallying for a five-set win over Turkey thanks to a 28-point effort by Tijana Boskovic after trailing 2-1 in the match.  Current Photo via FIVB

Irina Voronkova was too hot to handle for Belgium as the Russian star put up 23 points in a four-set win Thursday.

Voronkova guided Russia in sets 1 and 2, but Herbots and Grobelna answered her to keep Belgium close in Set 2. The teams were tied at 15, before the Russians closed out the win on a 10-5 run, including a Voronkova ace and back row putaway.

Russia seized a 5-1 lead in Set 3, but soon faced a 12-7 deficit as Lemmens took over with an impressive serving run for the Belgians. Voronkova answered with five kills to tie things up at 13. Van Gestel upped her game and Laure Flament added two kills to give Belgium a set point try. Grobelna extended the match with a back row kill to cap a 25-23 win.

Belgium carried the momentum into Set 4, going up 13-11, but it was all over from there as Russia scored nine straight en route to a 25-18 win. Lyubushkina served up three straight aces in the rally to help put the match out of reach.

While Russia kept its foot in the door for a possible Final 6 berth with the win, the team must now face the cream of the crop in No. 1 China, No. 2 USA and No. 4 Brazil in Jiangmen, China, next week.

Serbia picked up two key points in the VNL standings, rallying for a five-set win over Turkey after trailing 2-1 in the back-and-forth match.

Turkey boasted a slight edge offensively (57-52 in kills), while Serbia controlled the net (12-9 in blocks). Both teams served up 10 aces, while Serbia had help from five extra Turkish miscues (32-27), although both teams totaled 105 points for the match.

Tijana Boskovic accounted for nearly a third of Serbia’s tally with 28 points, with 23 kills, a team-high four blocks and an ace. Brankica Mihajlovic and Milena Rasic poured in 16 points apiece to help lift Serbia to victory, notching 14 and 11 kills respectively and each serving up two aces. Jovana Stevanovic put up four blocks in just over three sets of action to help limit the Turkish attack, while Rasic added three stuffs.

Maryem Boz, Eda Erdem Dundar and Zehra Gunes each posted double-digit scoring efforts for Turkey with 21, 15 and 14 respectively. Boz downed 17 kills to go with three aces and a block, while Erdem Dundar and Gunes notched 10 putaways and three blocks each. Erdem Dundar also led the team from the service line with two aces alongside Meliha Ismailoglu (9 points).

Turkey led by as many as three twice in Set 5, last at 8-5 as Boz scored four of the team’s first seven points. Serbia evened the score both times and grabbed a 12-10 lead of its own on a block by Boskovic. She then added two more kills as Serbia claimed the 15-12 victory.

In Set 3, Boz starred, serving up an ace early on and then contributing a huge kill at 20-15 to kick off a late rally which gave Turkey the 2-1 lead.

Set 4 belonged to Boskovic and the home side as she contributed a key block to end a 6-0 scoring run for Turkey and then tooled the block to give Serbia set point at 24-20.