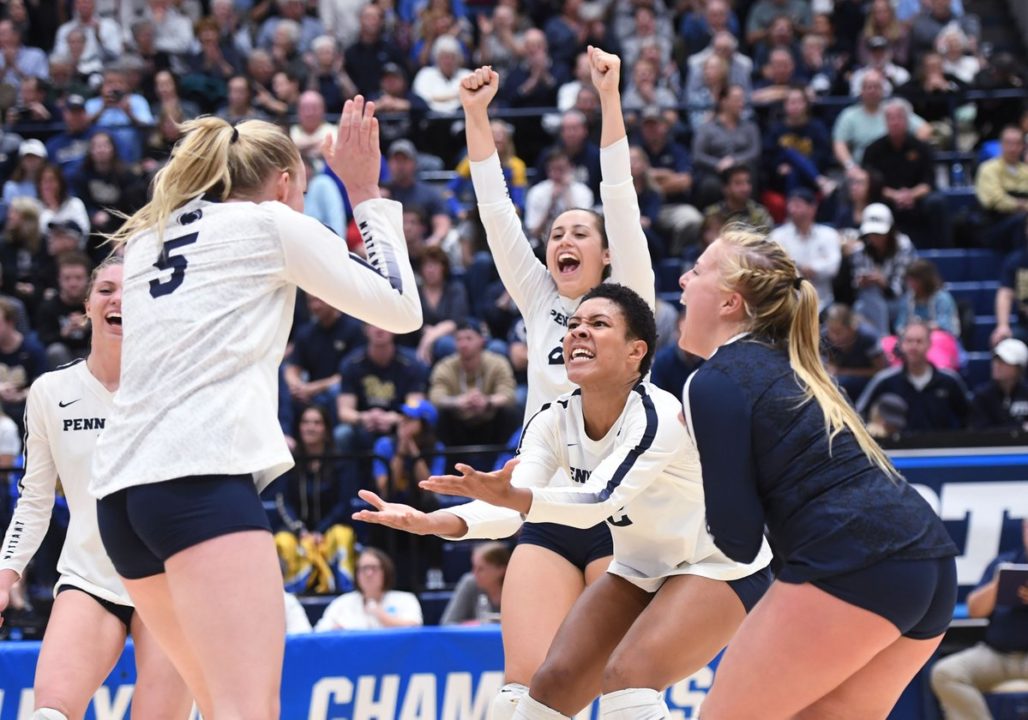 Penn State's quest for its 13th NCAA Final Four berth took three match-point attempts and overcoming a pair of Spartan set point tries, but in the end, the Nittany Lions finished off the sweep.  Current Photo via Penn State Athletics

UNIVERSITY PARK, Pa. – Penn State’s quest for its 13th NCAA Final Four berth took three match point attempts and overcoming a pair of Spartan set point tries, but in the end, the Nittany Lions finished off the sweep and punched their ticket to Kansas City with their 23rd straight victory.

The Final Four berth is the team’s seventh since 2007, with all but one of those resulting in a national title.

On Saturday, PSU relied on its blocking prowess to grab the win, putting up 14 stuffs and holding Michigan State to a .149 hitting effort. The Nittany Lions hit .276 on the night and bested the Spartans 46-43 in kills and 14-8 in blocks. One of the nation’s top serving teams (6th nationally), MSU served up seven aces, while allowing just two.

Senior outside hitter Simone Lee was the lone PSU player with double-digit kills, notching 12 to go with 10 digs and three blocks. Senior right side hitter Heidi Thelen was an X-factor in the match with nine kills, while hitting at an errorless .643 clip (9-0-14) and putting up four blocks. Senior outside Ali Frantti added eight kills and 10 digs. The Spartans held senior middle blocker Haleigh Washington to a season-low .176 hitting effort and five kills, but she came through for the Nittany Lions at the net to the tune of 10 blocks. Sophomore libero Kendall White pulled up a match-high 18 digs.

Redshirt senior outside Autumn Bailey put down a match-high 18 kills in her final match as a Spartans, while hitting at a .333 clip and adding 12 digs. Senior outside Holly Toliver added nine kills, 10 digs, four blocks and three aces. Senior middle Alyssa Garvelink was third on the team with six kills, while putting up six blocks. Freshman libero Jamye Cox registered a team-leading 17 digs.

Penn State built an 8-5 lead early with kills by five different players, including two each by Frantti and Lee. Michigan State scored nine of the next 13, as five different players turned in kills, to put the Spartans up 14-12. MSU pushed ahead by four at 18-14 with two kills and a block by Bailey. The Nittany Lions used a 7-1 run to turn things around and go up 21-19 forcing the Spartans to use up both of their timeouts in the process. Back to back blocks by Washington and a kill by Frantti put PSU on top. MSU knotted the score at 22, before committing two hitting errors and falling 25-23 on a Lee putaway.

The Nittany Lions jumped out to a 6-1 lead in Set 2 behind two Lee kills and two stuffs by Washington and setter Abby Detering. The Spartans would get no closer than three the rest of the stanza (6-3). Two kills and solo block by Lee made it 12-4. Washington notched a kills and three blocks to push the margin to 10 at 23-13. Michigan State kept the set going with a 4-0 run, including three straight Bailey putaways. Kills by Bryanna Weiskircher and Thelen capped the 25-17 win.

Penn State cruised to a 5-1 lead in Set 3 and boasted a 9-4 edge before Michigan State began its comeback. Toliver, setter Rachel Minarick and Brooke Kranda narrowed the gap to two at 9-7 and again at 13-11. Two Washington kills and an ace made it a five-point game again at 17-12. Down 20-15, the Spartans put together an 7-3 run to slice the margin to one at 23-22. Five kills, two by Bailey, and two aces, put MSU back in the game. Nia Reed gave Penn State its first match-point try at 24-22. Bailey thwarted that attempt and a block knotted the score at 24. An ace by Toliver gave the Spartans a set-point attempt at 25-24. Bailey downed her 18th kill to give MSU another shot at 26-25. Penn State came through with three straight points to cap the sweep. A kill and a block by Thelen set up the final point, which came on a Michigan State hitting error.

The No. 1 Penn State women’s volleyball team earned it 13th NCAA Semifinal Appearance with a sweep of No. 12 Michigan State, 3-0; 25-23, 25-17, 28-26, in the University Park Regional Final on Saturday evening inside of Rec Hall on Penn State’s campus.

Penn State trailed late in the opening set, falling behind 18-14 to the Spartans. However, the grit and determination of the senior-laden Penn State squad saw the match even up at 19’s, and then take the lead when Haleigh Washington (Colorado Springs, Co.) recorded back-to-back solo blocks to give Penn State the advantage. From there, the Nittany Lions would go on to take the set, 25-23.

In the second set, Penn State jumped on the Spartans early, taking a commanding 12-4 lead. Late in the second, MSU went on a 5-1 run and closed the gap to 23-17, but that was the closest the Spartans would come, as Penn State strung together a kill from Bryanna Weiskircher (Rockford, Ill.) and Heidi Thelen (Edgewood, Ky.).

Heading into the break, Michigan State knew they were going to have to fight, and they came out swinging. The Spartans put down 19 kills in the final set, but it was not enough to stifle the Nittany Lions, who hit .317 in the final set, and saw Thelen go off for five kills on seven attempts to spark Penn State to a gutsy, 28-26, final set win.

Simone Lee (Menomonee Falls, Wis.) was named the Most Outstanding Player of the University Park Regional, and she finished the evening with a double-double, leading the team with 12 kills, adding 10 digs, and three blocks.

Thelen finished the match with nine kills and a match-best .643 hitting percentage. She also added four blocks and two digs.

Ali Frantti (Spring Grove, Ill.) earned a spot on the University Park Regional All-Tournament Team as she finished the match with eight kills and 10 digs. She also added a block.

Penn State finished the match with a 14.0-8.0 blocking advantage while holding MSU to just .149 on the attack.

The Nittany Lions have now secured a spot in the NCAA Women’s Volleyball Championship Semifinal as they are slated for another Big Ten matchup. Penn State will face Nebraska on December 14. The time is still to be determined.

No. 12 Michigan State’s magical 2017 season came to a conclusion on Saturday evening, as the Green and White fell to No. 1 overall seed Penn State 3-0 (23-25, 17-25, 26-28). MSU, which was appearing in the NCAA Regional Final for the first time since 1996, put up a valiant effort vs. the Nittany Lions, but came up against another senior-laden team and fell just short of the Final Four.

MSU finishes its season with a 24-9 record on the year. Penn State is 33-1 and will play Nebraska in the NCAA semifinals next week.

Rachel Minarick became MSU’s all-time assist leader, as her 34 helpers pushed her career total to 4,581 and past Nikki Colson (4,563, 2000-03). Autumn Bailey tied her season best with 18 kills and hit .333, securing a double-double with 12 digs. Holly Toliver just missed a double-double with nine kills, 10 digs, four assists, three aces, and four blocks, and Alyssa Garvelink moved into third place all-time at MSU in block assists with six kills and six blocks on the night.

For the Nittany Lions, Simone Lee had 12 kills , 10 digs, and three blocks; Haleigh Washington had 10 blocks but just five kills and hit .176. Heidi Thelen had nine kills and hit a match-best .643.

The teams engaged in a tight first set battle, with Penn State taking a 25-23 win after battling back from a four-point deficit. The momentum carried over for the Nittany Lions in the second set, who built a lead as many as 10 points. The mountain was a bit too tall to climb for the Spartans, who did mount a late comeback and make it 23-17 before the Nittany Lions closed it out on back-to-back kills. MSU trailed in the third set by as many as five points, but battled back into it to force extra points. The Spartans held set point at 25-24 in an effort to push it to a fourth set, but the Nittany Lions closed out the win on a 4-1 run to take the third set 28-26 and seal their spot in next week’s Final Four.