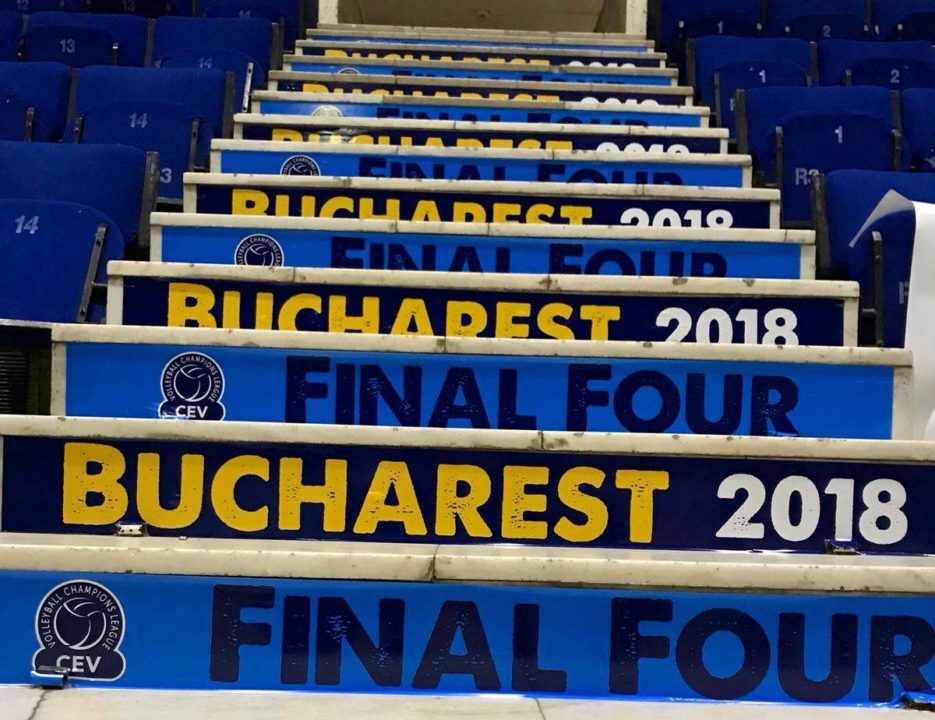 Who will win Europe's most coveted volleyball crown? Current Photo via CEV

The time finally has come for Europe’s best Women’s clubs to dish it out in the Champions League Final 4. On the line will be Europe’s most coveted volleyball title. Turkey’s powerhouses once again look to dominate: VakifBank will be chasing their 4th title in 8 years, while Galatasaray will try to prevent hosts Alba Blaj from making history for Romania after their sensational campaign in the League Round. Meanwhile, Conegliano will try to avenge its 2017 silver medal finish. CEV put out a nice list of facts and figures for this weekends match-ups. We bring you the best of them:

• In the semis, VakifBank will play Imoco Volley CONEGLIANO in a repeat of last year’s gold medal match and in a game featuring the 2018 national champions of Turkey and Italy.
• Titleholders VakifBank ISTANBUL are making a record sixth straight appearance in the Final Four of the CEV Volleyball Champions League. Turkish teams have won five of the last seven Champions League titles – VakifBank in 2011, 2013 and 2017, Fenerbahce in 2012 and Eczacibasi in 2015.
• Kelsey Robinson and Kimberly Hill are not only long-time teammates from the USA national team – they even switched positions and team ahead of the 2017-2018 season, with Robinson moving from Conegliano to Istanbul and Hill doing just the opposite.
• Chinese national hero Zhu Ting, an Olympic champion from Rio 2016, will be vying for her second straight Champions League crown and possibly for another MVP award to go with the one she took last year in Treviso. She is the top scorer in this year’s CEV Volleyball Champions League on 190 points. As for Imoco Volley, Hill and Samanta Fabris have been their most prolific players this far on 139 and 137 points, respectively.
• The team captain of VakifBank, Gözde Kirdar, will retire from competitive sport after the Final Four. She will be trying to add a fourth Champions League crown to her resume and a fourth title this season to go with the Turkish national league, Supercup and national cup.
• Imoco Volley will have to make do without their starting middle blockers – Robin de Kruijf and Raphaela Folie are nursing injuries and will be missing the event in Bucharest. It is the second time in a row that this happens to De Kruijf – she had to sit out last year’s event in Treviso due to injury as well.

Zhu Ting is an almost unstopable offensive force. Scoring at a 5.59 points/set clip with a 53% hitting percentage, she will be just too much to handle for Conegliano‘s defense., which will be without its two starting middle blockers. We expect a sweep.

• CSM Volei Alba BLAJ are the first Romanian team to contest the Final Four since the establishment of the CEV Volleyball Champions League in the 2000-2001 season. The event at Sala Polivalenta in Bucharest coincides with the first Volleyball event of this profile to take place in Romania in decades. Romania previously hosted the 1955 and 1963 editions of the European Championships.
• Ana Cleger of CSM Volei Alba BLAJ was the top scorer of this year’s League Round on 140 points, 10 clear of the Chinese superstar of VakifBank ISTANBUL, Zhu Ting. Tijana Malesevic, on the other hand, is a reigning European champion with the Serbian national team while Aleksandra Crncevic will contest her second Final Four in a row after doing so last year with Dinamo MOSCOW.
• Like Gozde Kirdar, Galatasaray‘s Neslihan Güler, who scored 38 points against Igor Gorgonzola NOVARA in the Playoffs 6 to secure a 3-1 away win after Galatasaray had previously lost 2-3 at home, will also be retiring from competitive sport after the Final Four.
• Tatiana Kosheleva, one of the star players on the roster of the Turkish team, will be missing the Final Four in Bucharest due to injury.

This match-up is not as simple as it seems to be. While on paper Galatasaray is the clear better team, Alba Blaj will be playing at home, with Ana Abel scoring at a scorching 6.09 points/set rate.  It will not go down without a fight, specially with Galatasaray missing Kosheleva.. We expect a narrow Galatasaray win in close sets.