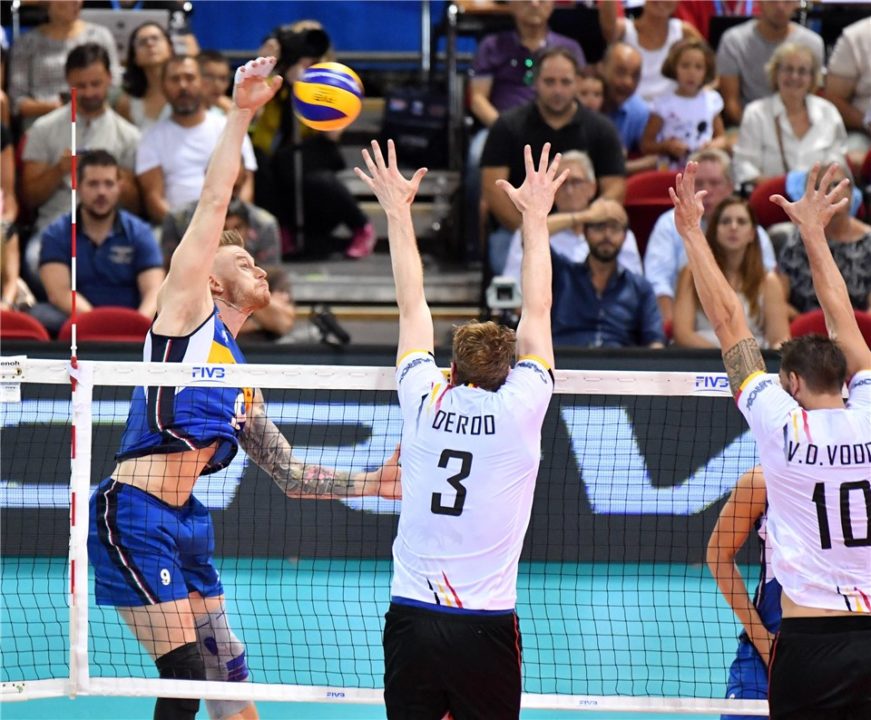 What is a team to do when its opponent’s star hitting duo erupts for a 25/31 (80%) hitting night? Belgium had to find out the hard way what it means to play against an inspired Italian team that has in it superstars of Zaytsev’s and Lanza’s caliber. Meanwhile, the Italian team continues to gift its home fans with dazzling performances. Here is the day’s recap:

Italy didn’t give Belgium a chance to built on its opening day win against Argentina, handling the Flemish team a very quick 3-0 (25/20, 25/17, 25/16) loss. Ivan Zaytsev had a monster game, scoring 20 points while hitting 15/17 and netting 5 aces. Equally effective was his partner Filippo Lanza, who scored 10 points on 10/14 hitting, as Italy an unheard of 70% from the field as a team. Meanwhile, Belgium had a not-so-stellar 47% hitting night. Next up for Italy is Argentina while Belgium will try to bounce back against Slovenia.

Flying in from the back, it's Italy's 🇮🇹 #5 Osmany Juantorena (@osmanijp5) with the massive spike that Belgium 🇧🇪 can't get! Fine serve he made to start this point, too! #FIVBMensWCH #volleyball #volleyballWCHs @Federvolley pic.twitter.com/wht0JBY0YY

What a rally!! Italy 🇮🇹 & Belgium 🇧🇪 with great saves to keep this one going, and it's the hosts who finally get the point!#FIVBMensWCH #volleyball #volleyballWCH @Federvolley pic.twitter.com/jZNf2tb9E9

Japan made quick work of the Dominican Republic by handing it a quick 3-0 (25/20, 25/26, 25/16) loss in only 82 minutes of play. Yuri Ishikawa led the way with 17 points on 15/20 hitting while Henry Capellan had 14 in the losing effort. Japan hit 58% from the field as a team while holding its opponent to 40% hitting, while also out-blocking it 12 to 4. Next up for Japan is Slovenia while the Dominican Republic will try to bounce back against Argentina.

Japan’s Coach Yuichi Nakagaichi: “We are very happy for the victory, but we need to improve our game because next matches will be more difficult. Now we celebrate this match, but from tomorrow we need to start with the same belief”.

Japan’s Captain Masahiro Yanagida: “I’m very happy for the performance of my team! We played very well but we can improve our game. Next matches will be very hard like the match against Italy”.

DR’s Coach Jose Alexander Gutierrez Sanchez: “Our team is very young. For almost everyone it is the first experience in a World Championship, so it is right that they enjoy it. At the next World Championship we will be ready!”

DR’s Captain Elvis Contrera: “Our team is very young, players are not even twenty years old so we are not experts. This matches are very good to grow up and I’m sure that at the next World Championship we will be ready!”