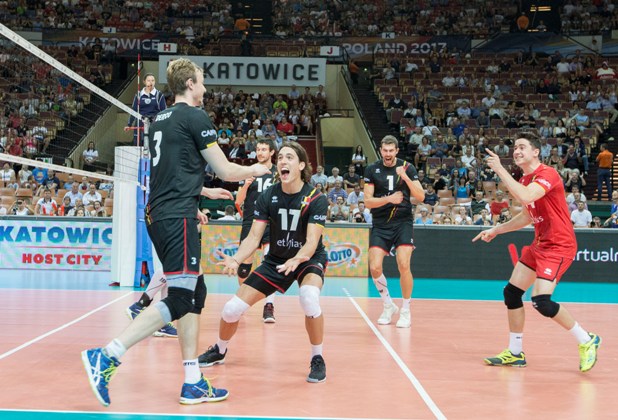 There will be three new teams on the podium at the 2017 European Men's Championship as the last remaining 2015 medalist, Italy, was eliminated in the quarterfinals on Thursday. Poland and France were knocked out in Wednesday's playoffs. Current Photo via CEV

There will be three new teams on the podium at the 2017 European Men’s Championship as the final remaining 2015 medalist, Italy, was eliminated in the quarterfinals on Thursday. Poland and France were knocked out in Wednesday’s playoffs.

Russia will play Belgium in the semifinals, while Serbia will take on the Germans. The teams did not meet in World League play.

In a repeat of the team’s pool play meeting, Russia swept Slovenia, knocking the defending silver medalists out of the European Championships in the quarterfinals with help from a superior blocking effort.

“We played very well today, it was a very important match, thanks to which we qualified for the semi-final, and we are happy about it,” Russian coach Sergey Shlyapnikov said. “From one side, a day off let us rest, but it’s easy to lose a match rhythm. Team work was a key to success.”

Russia boasted the lead at each of the three timeouts in all three stanzas, while besting the Slovenians 13-2 in blocks, 3-1 in aces and 34-30 in kills. The Russians also were the more efficient side, hitting at a 56 percent clip, while Slovenia managed just a 37 percent efficiency. Slovenia committed 17 service errors in the match.

After jumping ahead by five early in Set 1, the Russians boosted their advantage to eight midway through the set (16-8) and held onto the lead the rest of the way. A service error clinched the victory.

Set 2 was close in the early stages, until a Volkov block gave Russia a 12-8 lead. From there, the Russians carried on to a 25-19 win, including five blocks. Another Slovenian service error capped the stanza.

Russia led Set 3 throughout, despite a setter chance by the Slovenians. The Russians led 21-16 late after a handful of blocks, before Artem Volvich punched the team’s ticket to the semifinals with his sixth kill of the day.

“I am asking myself what happened today,” Slovenian coach Slobodan Kovac said. “The players said that they were tired, because they had to play less than 24 hours after the last, very important match. To be honest, I don’t like it and I cannot understand why they didn’t use today this positive energy and adrenaline from yesterday’s match. Of course, the opponent is a very good team, but when you play against Russia for the second time, losing the first match by own mistakes, you should have a different attitude, especially that a day earlier you had defeated such a strong team like Poland. This match showed that Russia are better at the moment and they aspire to play in the final of European Championship, but this tournament already brought a few surprises and everything is possible. Every match is a new story and we will see what happens next. We are upset, because I thought that we are able to be in top four.”

“I think it was really difficult,” German captain Lucas Kampa said. “We started with very bad serving and we had problems with putting ball on the other side. The Czechs played the way we expected. They did not surprise us at all. I am happy that we managed to get out of this difficult situation. We made a lot of errors during the whole game, but in the very decisive moments we managed to reduce them at least a little bit. Before the semifinals we have to improve everything. For sure we have to serve better and be courageous. It looked like we were scared to play very offensively. If you want to play in the finals, you have to serve well.”

Michal Finger downed a match-leading 19 kills en route to a 21-point effort to lead the Czechs. Donovan Dzavoronok followed with 15 points, all on kills.

Grozer managed nine points in the opening stanza, lifting Germany to the 25-22 win. The Czechs boasted the early lead (8-5), but the Germans had seized control by the midway point (16-14). Sixteen kills and three aces contributed to the win.

A strong blocking effort gave the Czech Republic an easy route to a 25-16 win. In addition to the team’s four blocks, the Czech’s benefited from 11 German miscues in the stanza. The victors stretched a two-point lead to five (16-11) at the second timeout, before pushing ahead to a nine-point win.

The Germans had help from eight Grozer kills and five blocks in edging out the Czechs for a 25-23 Set 3 victory. Lukas Kampa accounted for three of the blocks, while Bohme’s stuff capped the win.

Finger came alive in the final stanza and the Czech Republic managed four blocks to give the team the early advantage. However, the Germans seized control at 16-14 and held off the their foes for the win and the semifinals berth. Grozer wrapped up the win with an ace.

“We played for maximum risk, Finger said. “Germany played really well. We did not manage to break the Germans’ game. They were simply better than we were. We played well in the second set, when we made just few mistakes, unlike our opponents. Well, sometimes you win and sometimes you lose. Unfortunately, this time we lost.”

A balanced attack, featuring four players with double-digit scoring tallies, paced Serbia to a sweep and a ticket to the semifinals.

Drazen Luburic (13), Uros Kovacevic (11), Nemanja Petric (10) and Marko Podrascanin (10) shared the load for the Serbians. Luburic managed 11 kills and two blocks, while Kovacevic chipped in 10 kills and one of the team’s two aces. Petric and Podrascanin notched eight putaways each, with the former also registering an ace and the latter managing a team-best two blocks.

Serbia is assured of besting its seventh place finish from 2015 after downing Bulgaria, which just missed the podium in fourth two years ago. The victory leveled the recent series with the Bulgarians following a five-set affair on World League Week 3.

Serbia won the match by nine points, most of which came on the team’s 45-36 kill advantage. The Serbians also won the block (7-5), which the Bulgarians countered with a 26-24 edge in points off errors. The teams each managed two aces.

The teams were knotted at 7-all in Set 1, before the Serbians broke away for a 13-9 lead. A Luburic putaway pushed the edge to five at 20-15, but Bulgaria cut the margin to two at 22-20 as Sokolov heated up. A Kovacevic ace preserved the set Serbia.

Bulgaria went up 4-1 in Set 2, but could hold off the Serbians, which caught up at a 11-all en route the lead. Errors plagued the Bulgarians allowing Serbia to take a four-point lead. Petric came through with the final point to seal the 25-22 win.

After trailing 6-4 in Set 3, Serbia came back to take a 9-8 lead behind Petric. Bulgaria regained the edge at 14-12 and led by two again at 20-18 after aces by Sokolov and Nikolay Nikolov. Bulgaria had set points chances, but could not finish, eventually falling as Kovacevic buried two kills to steal the win for Serbia.

Fourteen blocks helped Belgium to a sweep of defending bronze medalist Italy and earned the squad a spot in the semifinals for the first time. The win was Belgium’s second of the summer over the Italians, including a four-setter during Week 3 of World League play.

The Belgians outblocked Italy (14-4), hit at a 48 percent efficiency (to 40 percent) and outdid their foes from the service line (4-3). Italy scored eight more kills (38-30), but gave up 27 points on errors, including 18 on serves. For its part, Belgium committed just 10 errors in the match, eight on serves.

“We tried to win this game, but we came across a really strong opponent,” Italian coach Gianlorenzo Blengini said. “We did not do our best. Our serve, our block and our defence were much worse than yesterday. We focused too much on getting points. We should have focused on our technical skills.”

Luca Vettori (12) and Daniele Mazzone (10) turned in double-digit scoring efforts for Italy, but could not keep the team in the medal race. Vettori downed 12 kills, while Mazzone added seven putaways, a team-best two blocks and an ace.

Italy led 16-15 at the second timeout of Set 1, but several errors and a few Belgian blocks turned the tables to give the victors a 19-16 lead, which they maintained en route to a 25-21 win.

Deroo starred in Set 2, leading the Belgians to a 25-11 drubbing.

In the final stanza, the teams were back and forth, but the Belgians scored just enough to keep Italy out of the lead. Unforced errors, including a service error to wrap up the match, aided Belgium in the 25-23 win.

“It was a very equal start to 20-20,” Belgian coach Vital Heynen said. “Then we won the first set and played good volleyball. Only in the third set we started thinking about winning and got a little bit nervous, but luckily we held on and I think it was an amazing game for us.  We go to the semifinals to win… maybe not by 3-0, but a 3-2 would be OK for us.”