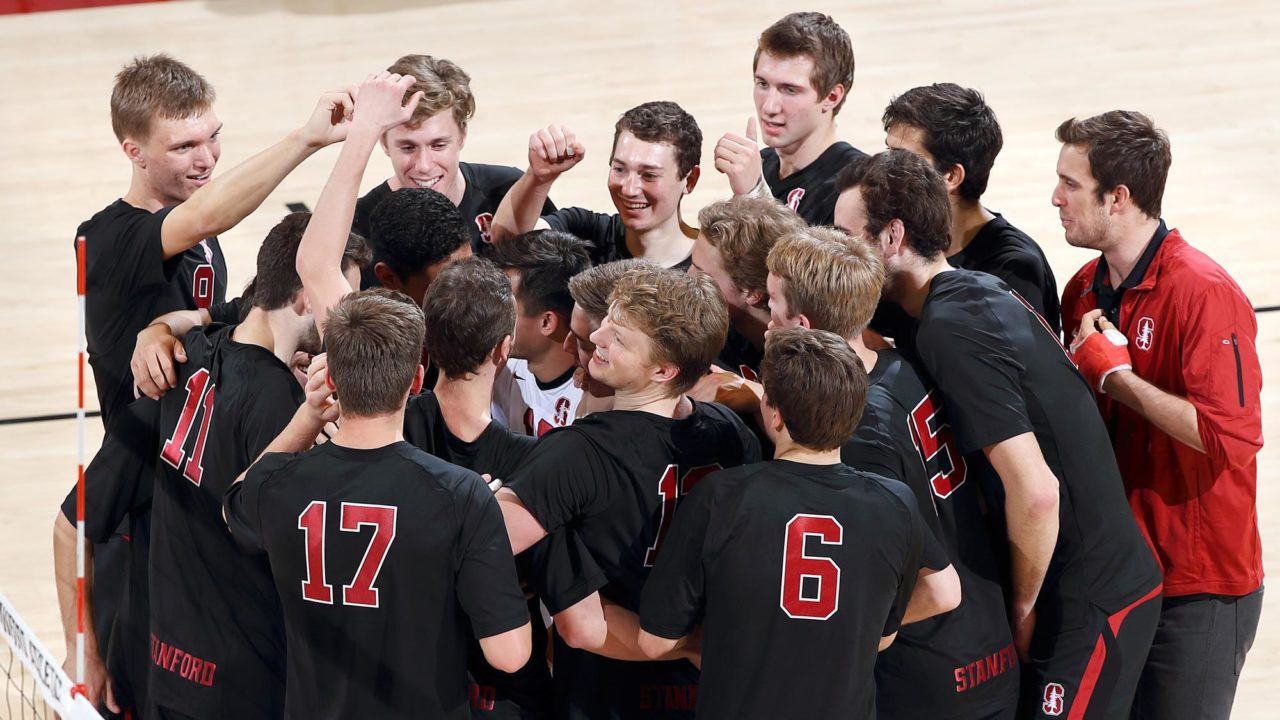 #8 Stanford had a season-high of 84 kills on 194 swings to defeat #12 UCSB and now Stanford is tied with Hawaii for 3rd in the MPSF conference. The second game of the match went all the up to a high of 43-41. Thanks from a combination of the 5-setter, plus that one huge rally, their 84 kills were the highest by any NCAA team in a game this season, and Long Beach State’s 75 tied for the 2nd-highest.

Cardinal Jordan Ewert had a career high and match-best 26 kills as well as totaling 9 digs and 3 blocks. Kevin Rakestraw also had a career-high of 19 kills and 5 blocks during the match.

UCSB’s red shirt senior Jacob Delson had 19 kills and 11 digs but it wasn’t enough to get the Gauchos out of a 6 match losing streak – in spite of the solo block that ended the monster 84-point set. Conner Drake had a career-high 12 kills and lead the team with 7 blocks.

Sophomore outside hitter Jordan Ewert had 26 kills overall to lead the comeback for the Cardinal (8-4, 5-2 MPSF), which hit .333 down the stretch behind Paul Bischoff’s (55 assists) setting.

Redshirt senior Jacob Delson had a 19 kill-11 dig double-double to lead the Gauchos (6-7, 3-7), who are now in the midst of a six-match losing streak.

Each of the first three sets on Saturday were extremely tight, with UCSB emerging victorious in the first two. Stanford pulled out the third with a late rally, then parlayed that momentum into sizable wins in the final two frames.

Particularly contentious was the second set which lasted a total of 84 points, the longest in any MPSF match this season and the longest for UCSB in the Rick McLaughlin era (since 2008). The Gauchos had the majority of control in the set, leading by as many as four until the Cardinal came back to tie it late with a 5-1 run that made it 21-all.

Both teams had their chances to win it in extra points, with the Gauchos enjoying seven game points to Stanford’s 11. Ultimately, it was strong serving from Cherry and the UCSB block that proved decisive, as a Randy Deweese-Drake double block set up game point before Delson came through with a huge solo block of a Ryan Smith swing to put the Gauchos ahead 2-0.

Extra points didn’t prove as fortuitous for UCSB in the third, as a late Gaucho comeback came up short thanks to two quick points for Stanford off a 24-24 tie. Senior outside hitter Gabriel Vega (16 kills, six digs, four blocks) came up big first for the home squad with a clutch kill that made it game point, then middle blocker Stephen Moye recorded the most important of his match-high eight blocks with a solo stuff on a quick hit from Drake to make it 2-1.

The Gauchos return to Rob Gym, where they are 6-2 this season, for a pair of contests next week, first hosting Long Beach State on Wednesday night before welcoming CSUN on Friday night. Both matches are scheduled for 7:00 p.m. starts

It was the second-consecutive five-set match win for the Cardinal, which improved to 8-4 overall and 5-2 in the MPSF. Stanford out hit UC Santa Barbara (6-7, 3-7 MPSF) .253 to .217 with a season-high 84 kills on 194 swings. The Cardinal is now tied with Hawai’i for third in the conference, just a half a match behind second-place BYU.

Stanford found itself in an 0-2 hole after failing to convert on 12 set-points in the second. With 25 tie scores and 11 lead changes, it was the longest set played by Stanford since a 41-39 loss to Pepperdine on March 29, 2003.

Junior Kyle Dagostino started the match at setter for Stanford, totaling 13 kills and seven digs in four sets played. Freshman Paul Bischoff took over and posted his second career double-double with career-highs in assists (55) and digs (13).

Stanford picked up its defensive intensity as the match went on. The Cardinal racked-up a season high 60 digs as a team, led by junior libero Evan Enriques. The Punalu’u, Hawai’i native finished with a season-best 15 digs and matched his career-high with five assists.

As a team, Stanford tallied 14.0 blocks, with freshman Stephen Moye pacing the squad with a career-high eight. The Cardinal limited the Gauchos to just three kills in the final frame, forcing UCSB to hit -.200

Stanford hits the road next week to face USC on Thursday, Feb. 16 and Cal Baptist on Saturday, Feb. 18. Thursday’s match against the Trojans will be televised live at 6 p.m. on Pac-12 Networks.