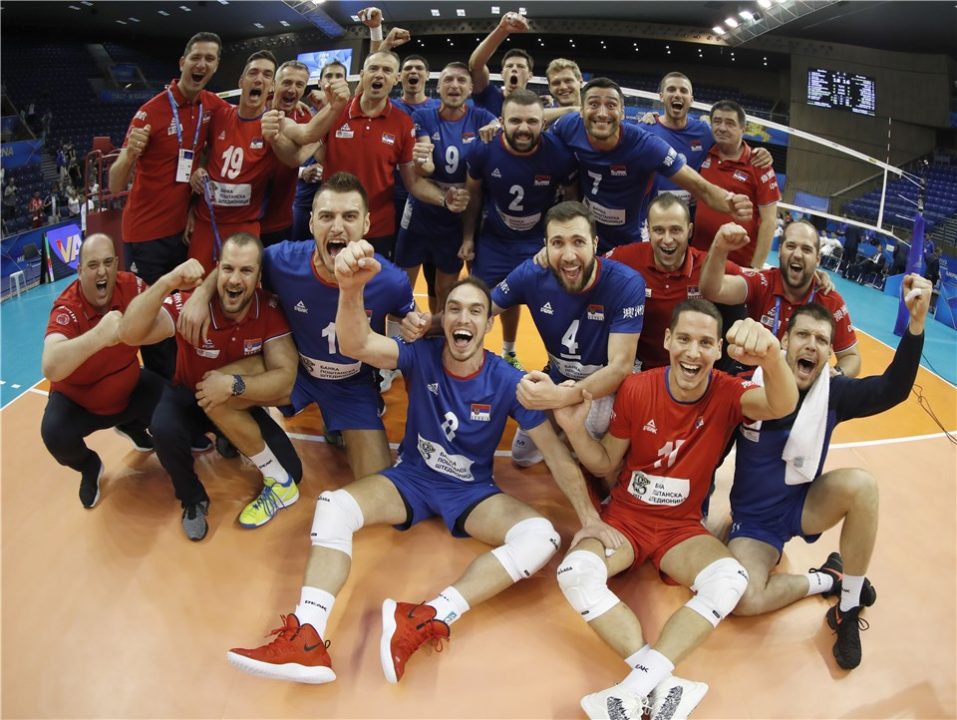 After a 3-2 win over France, Serbia and Poland now both have a 5-1 record in Pool H.  Current Photo via FIVB

Serbia got themselves back into contention to win Pool H with a 3-2 win over France. The French have found themselves in a deeper hole with that defeat. Argentina is holding on to just a slight chance of advancing, but they showed they are not going down without a fight. They scored a 3-2 upset over previously undefeated Argentina.

Argentina’s coach, Julio Velasco, through everything he could at the defending World Champions in order to stay alive in the tournament. He utilized all 14 players on his roster in the tie-break victory. Only 3 players started in every set: Cristian Poglajen, Sebastian Sole, and Maximiliano Cavanna. The lineup experiments and adjustments led to a vital victory for the Argentinian side.

Poglajen led the scoring for Argentina with 14 points on 12 kills, 1 block, and 1 service ace. Jose Luis Gonzalez came on as a substitute in the first set and played through the fourth set on his way to 12 points. Those points came on 9 kills, 2 blocks, and a service ace. Sebastian Sole contributed 10 points in the middle on 8 kills and 2 blocks. Facundo Conte, coming off of a 33-point performance against Japan on Tuesday, only scored 5 points and was relegated to the bench after the second set.

Poland was led by Artur Szalpuk and his match-high 19 points. He hit 50% on his way to 18 kills and also chipped in 1 block from the outside hitter position. The other outside hitter, Aleksander Sliwka scored 13 points on 11 kills and 2 blocks. Coach Vital Heynen used both Bartosz Kurek and Dawid Konarski at opposite. Kurek started the match and scored 8 points on 7 kills and 1 block. He was replaced by Konarski in the third set. Konarski finished the match with 11 points from 9 kills and 2 blocks. Jakub Kochanowski led the match with 5 blocks for Poland.

Konarski remains optimistic after this setback. “We are dissapointed for, but we have everything in our hands in the upcoming matches,” he said. “I hope we will win them.”

Aleksandar Atanasijevic tied the record for points in a match at the FIVB World Championships with 38 points, and Serbia needed every single last one of them to get the victory. This point total included a match-high 6 points in the tie-break set. The opposite for Perugia tallied 35 kills on 54 swings for a 64.8% attack efficiency. He also chipped in 2 blocks and an ace.