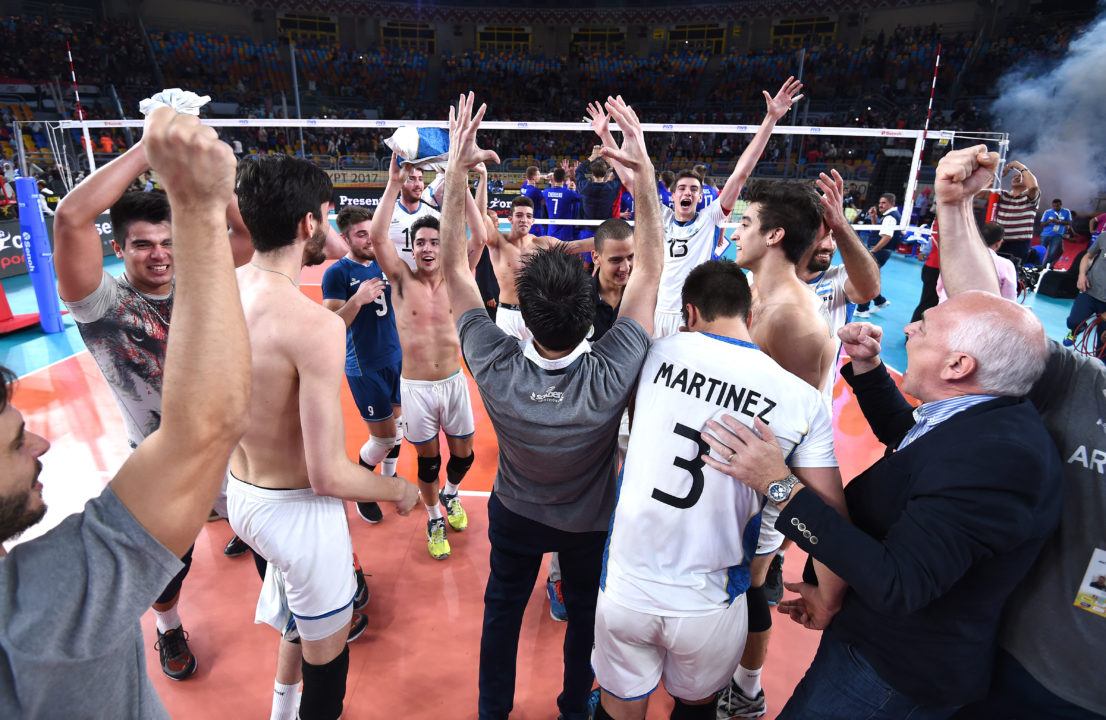 With the gold medal, Argentina cements its status as the biggest contenders for a new spot on men’s volleyball pantheon Stock Photo via Courtesy of FIVB

A rising presence in South American volleyball for the last five years, Argentina’s gold medal in such an important youth tournament solidifies its case as an up and coming volleyball force to be dealt with in the future and contend against Brazil for continental supremacy.

Led by top scorer Gaston Fernandez on 20 points and opposite German Johansen, Argentina out blocked Russia 10 stuffs to 6 and took revenge for their defeat as U21s in the 2015 final in the hands of the same opponents. Argentina produced at times some amazing defending to keep Russia at bay and showed exceptional passion to keep the lead they built up for an incredible win.

It took Russia three sets and again some creating substituting by coach Andrey Voronkov to get started but this time it was too little, too late. The defending champions fought tooth and nail in the tight third, but even so never got a chance to finish it. On Argentina’s second set point Brian Melgarejo blocked Sergei Pirainen on the outside to bring it home.

Again Russia desperatley tried to stay alive in the fourth and this time got the job done on their second set point when Augustin Loser sent the ball wide on a quick attack from the middle. They did it again in the fifth after 13-13 on a pipe by Denis Bogdan followed by a double block by Bogdan and Denis Chereiskii. But at 9-9 in the sixth Argentina broke away with a six-point run to bring it home after two long attacks by the Russians for the last two points.

Cuba won the bronze medal outclassing Brazil 4-1 (18-16, 15-13, 15-13, 20-22, 15-11) as the last day of the competition got underway. Cuba could had done it the easy way with a straight sweep, had they taken advantage of a 14-12 lead (back from 10-12 down) in the fourth and a total of four match points. Brazil had also missed a chance to take a 1-0 lead when they blew a set point at 16-15 in the first, before Cuba took control to take it on their own third. Cuba dominated the blocking and served four aces to Brazil’s one, with Miguel Gutierres scoring 19 points and Miguel Lopez adding another 16. Brazil’s Douglas Souza was the game’s top scorer with 22 points.

But the South Americans, winners of the inaugural edition of the U23 Worlds in 2013, were clearly disappointed and seemed to lack motivation after their semifinal defeat in seven sets to Russia on Thursday. Brazil had been undefeated all through pool play, including a 4-3 win over Cuba earlier in the week.

It was Cuba’s first medal in the short history of the competition – an improvement on their fourth-place finish of 2015 in Dubai.

Brazil, coach Giovane Gavio: “We didn’t play well. Cuba were better than us. They played very well, especially the high balls. We tried to serve well, but we didn’t succeed, because Cuba were excellent. It was a difficult match for us.”

Brazil captain, Fernando Kreling: “The match was very difficult, because Cuba were very hard. It was all the more difficult after we lost the first three sets. One of the factors that let us down was that we didn’t train enough before the competition, and we were not in our best mood.”

Cuba coach, Nicolas Vives: “The match was great. Brazil are a good team and we performed better than we did yesterday against Argentina. To win the bronze medal is a great achievement because our team is the youngest in this championship.”

Cuba captain, Adrian Goide: “We have lost to Brazil before, so we tried to do better this time. We are happy to win the bronze medal although we had hoped to win the championship.”

Egypt claimed the fifth position after hey powered past Japan 4-0 (15-9, 15-8, 15-11, 15-12). This is the second best Egyptian finish in their history at the World Championships after the fourth place finish in the Boys’ U19 World Championship in 2001. Hisham Ewais concluded as usual as the top match scorer contributing 13 points for the winners, while Jin Tsuzuki and Kenta Takanashi led the losers with 5 points each.

Egypt started the match with a lot of pressure through their spike serve which couldn’t be controlled by Japanese receivers. Egypt used a combination of attacks through opposite Hisham Ewais and middle blocker Abdelrahman Seoudy to lead 15-9 and 15-8 in the first two sets.

Japan started to improve their defense in the third set and so they came nearer after the successful hits of Kenta Takanashi and Jin Tsuzuki, but finally Egypt won the set 15-11. The fourth set saw a better performance by the Egyptians as they won it 15-12.

Egypt coach, Marcos Miranda: “We had a hard competition and a tough group, but a goal to reach too among the big teams, especially as we played on home soil. I consider that fifth position for us like being champions. Today Japan played a good match. They are strong physically, so we played with force to stop their powerful attack – and my players managed to do that and win the match.”

Egypt captain, Ahmed Deyaa: “We improved with every match. We started the competition to earn a medal, but we are satisfied with the fifth place. We deserved it, because we trained hard and we did our best. For yet another time I thank all fans for their support and the medical staff for their efforts with team.”

Japan coach, Fumitoshi Tokuanaga: “We lost for the second time against Egypt and the Egyptians fans were key to Egypt’s win. We prepared very well for this match, but the pressure of the fans prevented the team from doing their best. We played in this championship for the first time so I am satisfied with our performance throughout the tournament.”

Outside hitter Saeed Javaheri of Iran led the match scorers with 17 points, while Chinese middle blocker Hongbin Jiang led the losers with 14 points. Iran did their best to finish the match in the shortest possible time and succeeded to lead 3-0, but China came back in the fourth set with their quick attacks and combinations led by setter Zhensen Xu to snatch the fourth set after they saved two match points. Iran regained their rhythm to win the fifth set using five missed services from their opponent to win 20-18 and the match 4-1.

Iran coach, Juan Cichello: “I think we won a difficult match, because China played very well in the 4th and 5th sets. We lost the fourth set because the players lost confidence as they are young. At least we finished with a victory today and this is good.”

Iran captain, Rahman Taghi: “This was a good match and I am very happy that at this tournament we were the winners of the 7th place. After two sets we felt we were already the winners so we relaxed and China took advantage of this to snatch the fourth set, but we were able to come back and win.”

China coach, Ju Genyin: “Today’s match was a good one and the players were very much in good shape and high spirits, though some did some mistakes such as losing four serves in a row, so we lost.”

China captain, Xu Zhensen: “We did our best and we are satisfied with the result. It was a good experience and we have enjoyed the tournament.”