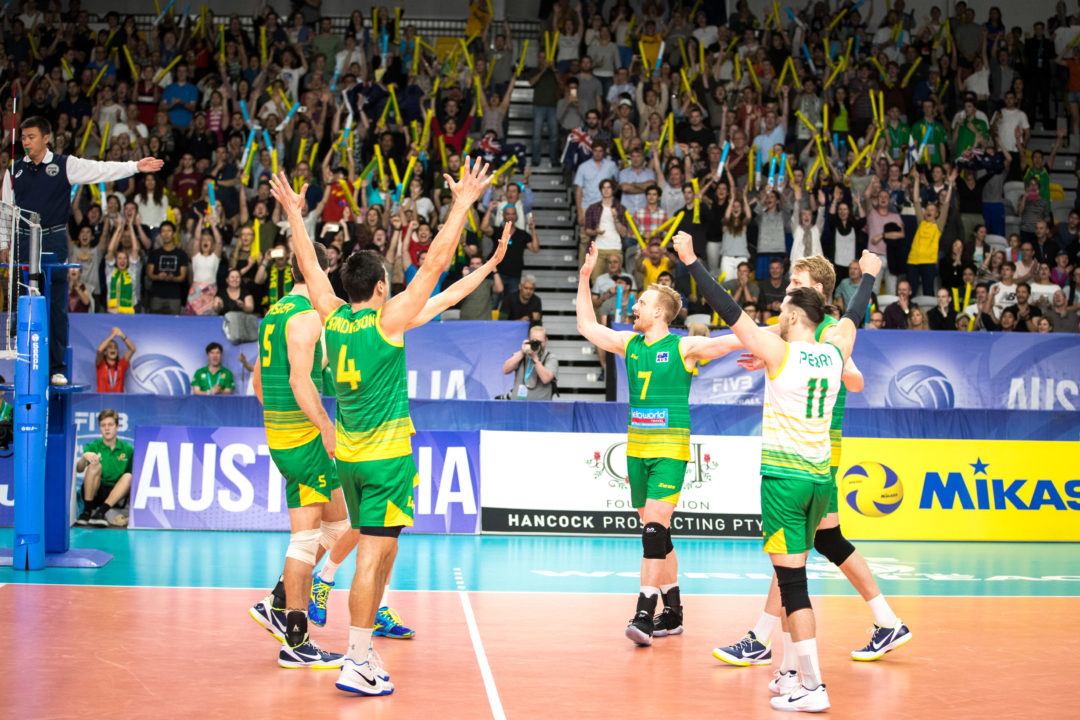 Australia came out victorious in the third-place match of Group 2 at the 2017 FIVB World League. Current Photo via via FIVB

In a match that featured the two losing teams from the semifinal round of Group 2 at the 2017 FIVB World League, it was Australia coming out with a three-set victory. Although the amount of sets were as concise as possible, the match was highly-contested as two of the sets went to extra points.

In the end, it was Australia – the host of the final four – who captured a place on the podium by winning third place.

In pool play, Netherlands posted the better record at 7-2 while Australia was 6-3. In the semifinal round, Netherlands struggled against eventual champion Slovenia as they lost in three-sets. Australia battled to five with Japan, but came out on the wrong end of the result.

After that 18-16 fifth-set loss, Australia needed some confidence early and got it from Nathan Roberts on a serve. Roberts threw down an ace on the opening point, eventually leading to a 5-1 edge for Australia. Australia would keep that four-point cushion at 16-12, but it was never enough to pull away. Netherlands battled back for the second time in the set and tied it at 19. After Australia won the next point, Roberts got another of his nine individual points on an ace for a 21-19 lead. Australia just couldn’t put an end to Netherlands though as the Deutsche won six of the next nine for a set-point chance at 25-24. A back-row attack from the right pin tied it at 25 as Paul Carroll threw it off a Deutsche block. Australia then survived two more set points to even at 27 before Roberts had his third ace of the set (and match) to switch the lead. Luke Smith, who finished with 12 points, had one of his three blocks on the next point as Australia won three in a row to take a 1-0 lead.

The first 30 points of set two were split between the nations. A Travis Passier serve that hit the net, rolled over and caught Netherlands off guard for an ace capped off a 5-0 run. Similar to Roberts, Passier also finished with three aces in a portion of the game that was dominated by the Australians. The five unanswered was the outlier in the match, as again the next eight points would be exchanged evenly. However, by then it was 24-19 until Carroll had one of his match-best 18 points for a 2-0 set lead.

With their backs to the ropes, Netherlands came out hot in set three with a 14-11 lead after Robin Overbeeke and Thomas Koelewijn combined for a block of an Australian attack. The lead held in Netherland’s favor until a triple block of Australia tied it at 19. Then, after a diving dig by Paul Sanderson, Australia gave a swing to Carroll who smashed one down the line for a 20-19 edge. Australia even won the next point, but relinquished the lead after a 3-0 spurt from the Deutsche side. They couldn’t hold the lead either and Australia pulled ahead for match point at 24-23. They couldn’t end it and even got two more set-point opportunities that they couldn’t take advantage of. Finally, on their fourth chance at match-point, Australia came out on top 28-26.

Australia and Netherlands both had 22 attack errors, but it was Australia logging eight more spikes (44-36). While the Deutsche won the block 12-9, Australia came out in the ace department, 7-2. Not only was it a fun experience for Australia to win third in front of a home stage, it was also key in Australia pulling through for the win. This was even more true after the tough loss they took yesterday against Japan.

“It was tough after yesterday’s loss,” Carroll said post-match to FIVB. “We are all physically tired, but I think we had good mental preparation today. We used the crowd to help us push and fight for the last few balls.”

Both sides finished the tournament at 7-4 (including the postseason results) with Australia ending the tournament on a win. Now, Netherlands and Australia will look to take these results toward the future.

“We fought a lot and we did a lot of things for the future. It was great to get the bronze medal and do it in front of our home crowd,” Australia coach Mark Lebedew told FIVB after the match. “We played a lot of pretty close sets and yesterday we had three of those. I’m happy that we put ourselves in the position where we can fight for the set win and match win. If we do that we can then we can win more than we’re losing.”

Although it wasn’t the win that they may have wanted, Australia did give the home fans something to be happy about at Group 2’s end. After going 0-9 and being relegated from Group 1, it’s a nice turnaround for Australia in 2017.